IPEN Urges Action to End the Use of Lead Paint 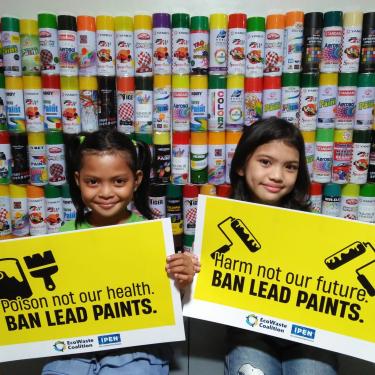 In an article for Asia Pacific Coatings Journal (APCJ), the leading trade magazine for the coatings industry in Asia, IPEN Senior Adviser Jack Weinberg and Jeiel Guarino, IPEN Lead Paint Elimination Campaigner describe the need for and effects of stricter global rules to end the trade in lead chromates, the pigments used in lead paint.

Lead paints were banned in many wealthy countries decades ago, but they are still widely used in many countries. The WHO says that lead paint continues to be one of the largest sources of domestic exposure to lead in children, and doctors and scientists agree that there is no safe level of lead exposure.

Dr Sara Brosché, Science Advisor for IPEN noted that “Alternatives are available for all uses so there is no longer any good reason for paint manufacturers, anywhere, to continue using lead chromates as ingredients in paints.”

The APCJ article explains that IPEN members around the world are advocating for the Rotterdam Convention to list lead chromates as hazardous chemicals that are subject to the provisions of the Convention’s Prior Informed Consent (PIC) Procedure. Under the PIC rules, companies that export lead chromates or paints that contain them may not ship these commodities to a country that has not consented to receiving them.

Further, countries can use the PIC Procedure to restrict or prevent the importation of lead chromates and paints that contain them. Doing so will make it easier for them to enforce their national lead paint laws and this, in turn, will encourage more countries to adopt lead paint controls.

“NGOs in the IPEN network appreciate all the Asian paint industry leaders who have actively supported national and international efforts to eliminate lead paints,” said the Philippine EcoWaste Coalition’s Manny Calonzo. “We hope they will now join hands with IPEN and other civil society organisations to help build public, governmental and industry support for a Rotterdam Convention decision to list lead chromates.”