Governments at the Stockholm Convention 8th Conference of the Parties (COP8) agreed to add three toxic chemicals to the treaty, but granted extensive loopholes for two of them. The chemicals are DecaBDE, SCCPs, and HCBD.1 All three chemicals are persistent, highly toxic, travel long distances and build up in the food chain. Loopholes were granted for DecaBDE and SCCPs and recent IPEN studies found both substances in children’s toys.2A small group of countries rejected proposals to at least label new products containing the substances. Countries and consumers concerned about contaminated products will have no information about their content.

“This is the beginning of the end for DecaBDE, SCCPs, and HCBD,” said Dr. Olga Speranskaya, IPEN Co-Chair. “We urge governments to move quickly to prohibit these substances and not prolong harm through the use of exemptions.”

Today at the Stockholm Convention 8th Conference of the Parties (COP8), governments rushed thru decisions to list two toxic chemicals, but provided extraordinary loopholes that permit all uses of them. The chemicals are DecaBDE, a flame retardant commonly found in electronic waste, and SCCPs, an industrial chemical used in metal working and as a flame retardant in plastics.1 Both chemicals are persistent, highly toxic, travel long distances and build up in the food chain. Recent IPEN studies found both substances widely present in children’s toys.2

IPEN Side Event: Screening of the documentary "Trashed"

Lee Bell, IPEN POPs and Mercury Advisor, introduced the film “Trashed.” Trashed is an environmental documentary written and directed by British film-maker Candida Brady. It follows actor Jeremy Irons as he investigates the global scale and impact of humanity's modern wasteful consumerism and pollution. The film is a call for urgent action to resolve the issue of existing deposits and drastically reduce our consumption towards sustainable levels and zero waste, but also demonstrates how this is already being achieved successfully in many communities around the world. The film was particularly relevant to show during the Conference of the Parties as discussions about low POPs content levels and other waste-related issues were taking place. 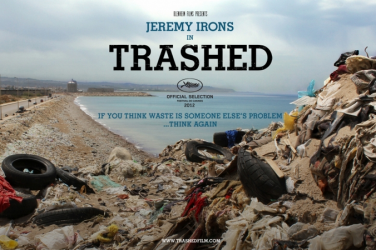 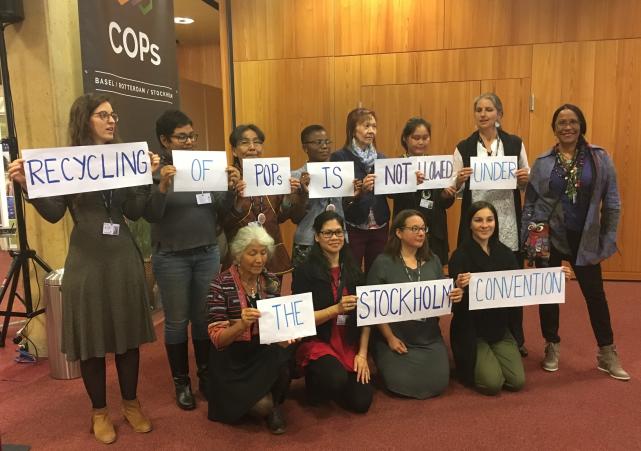 Opening of the Technology Fair

IPEN participated in the COPs Technology Fair by further highlighting how an X-ray fluorescence machine can be used to test various items for certain POPs and heavy metals. Jitka Strakova from Arnika Association showed delegates how specific toys were tested; the results for which were published in the IPEN report POPs Recycling Contaminates Children's Toys with Toxic Flame Retardants.

Also during the Technology Fair, Tiffany Tool (IPEN) used a hand blender to make fruit smoothies for Conference delegates visiting IPEN's Toxic Toy Store. She explained that, although the hand blender used to make the smoothies at the booth was tested and did not contain short-chain chlorinated paraffins (SCCPs), studies have shown that hand blenders used for food preparation leak SCCPs under normal use. The Stockholm Convention's POPs Review Committee (POPRC) recommended that SCCPs be listed in the Convention during the COP8. IPEN tested various toys (and other products) for SCCPs and the results are included in the new report Toxic Industrial Chemical Recommended for Global Prohibition Contaminates Children's Toys. 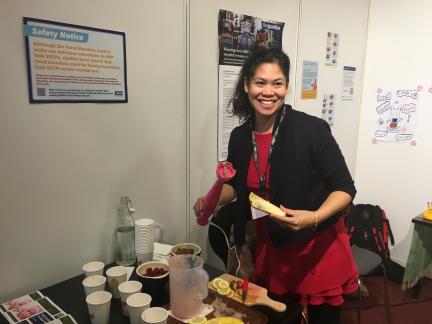 DecaBDE is used in the plastic casings of electronic products and if it is not removed, it is carried into new products when the plastic is recycled. Toxicity studies indicate potential adverse developmental, neurotoxic, and reproductive effects, and DecaBDE or its degradation products may also act as endocrine disruptors.

Ironically, a new IPEN study shows that the toxic recycling policy advocated by these countries widely contaminates children’s products. In fact, in Canada all sampled toys made of recycled plastic contained both OctaBDE and DecaBDE.

On the first day of the Conferences of the Parties, IPEN unveiled its "Toxic Toy Store," which displayed numerous toys from around the world that were tested to determine potential toxic ingredients, as well as IPEN and Partner documents, including IPEN's Toxic Toy Store Spring 2017 Catalog. Short-chain chlorinated paraffins (SCCPs), decabromodiphenyl (DecaBDE) and hexachlorobutadiene (HCBD), which were found in some of the toys, are recommended for listing in the Stockholm Convention. One delegate, visibly distressed by the presence of toxic chemcials in the toys at the booth, stated that two of the toys being displayed were currently in her daughter's bedroom. 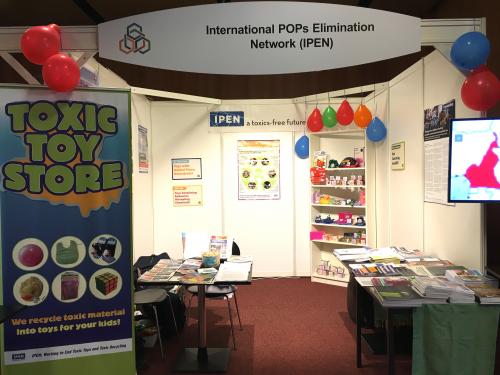 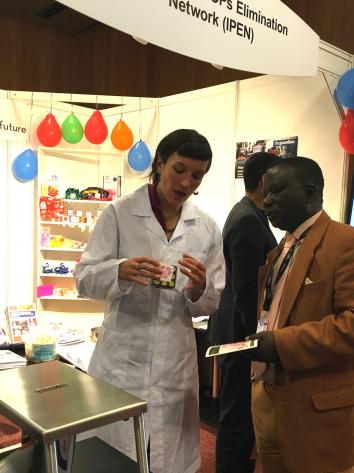 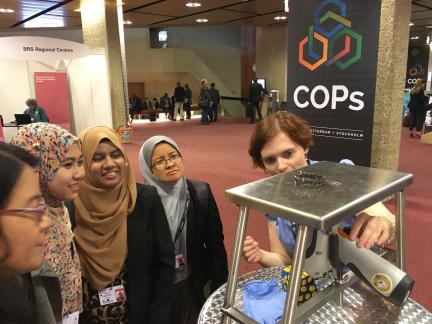 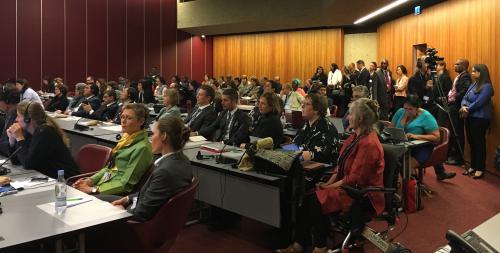 As delegates entered the event, IPENers handed them small bags filled with sugar that represented each person's approximate share of waste incineration ash that is produced each quarter of the year per each person living on planet Earth. The bags weighed 350 g. (slightly more than 1 ppb concentration), and, were it real waste incineration ash, it would contain approximately 375ng TEQ of dioxins. This amount of dioxins, if eaten, would be over 2,000 times a human's tolerable daily intake (2 pg/kg body weight/day). Even a 100 times lower exposure to dioxin (which can result in real contaminated food) is still worrying! The current Low POPs Content Level for dioxins in wastes (such as fly ash) is 15 ppb- 15 times more than the amount handed to the delegates attending the side event. IPEN believes that delegates must adopt the more stringent value for Low POPs Content Level for dioxin (PCDD/F) of 1 ppb. 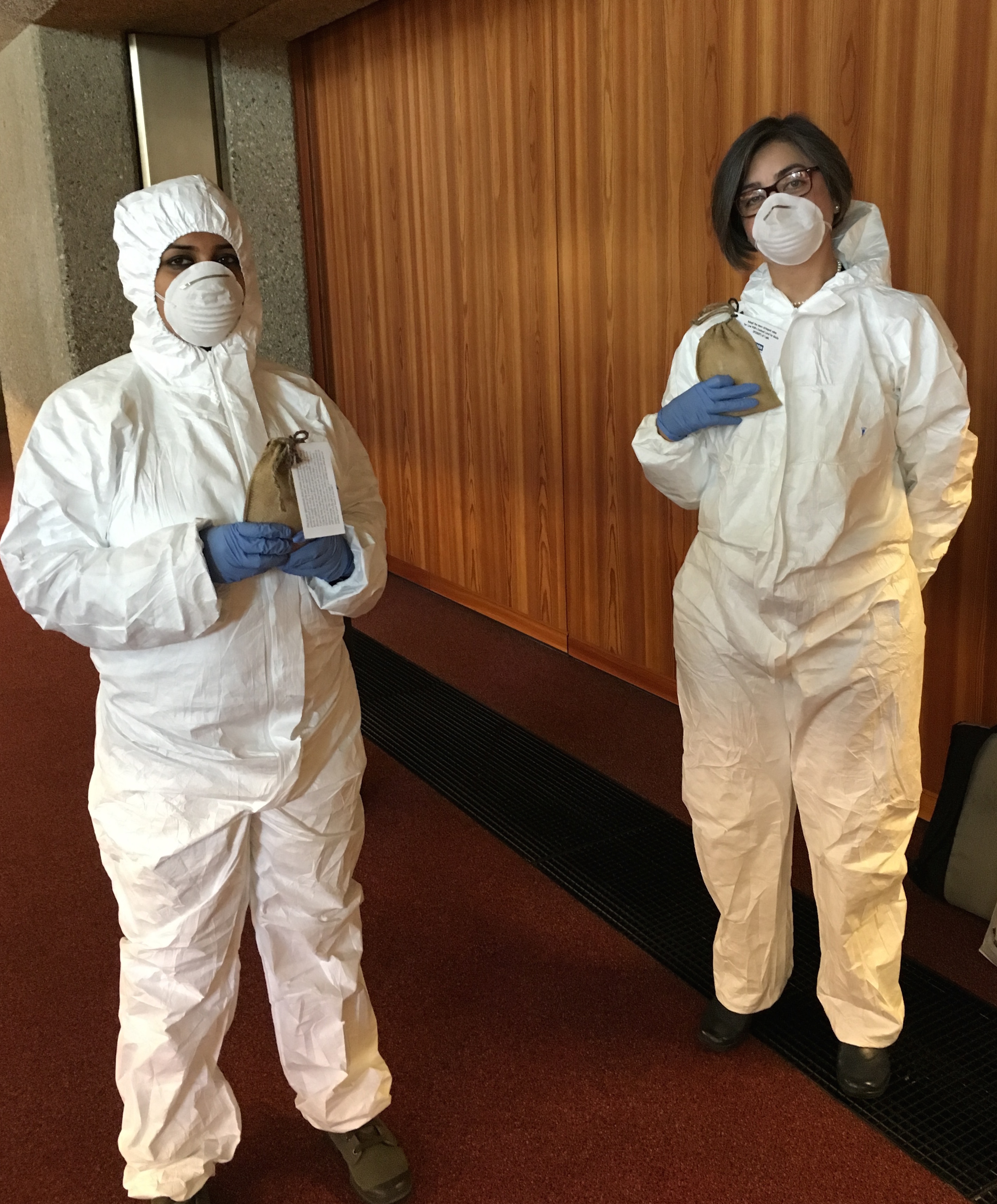 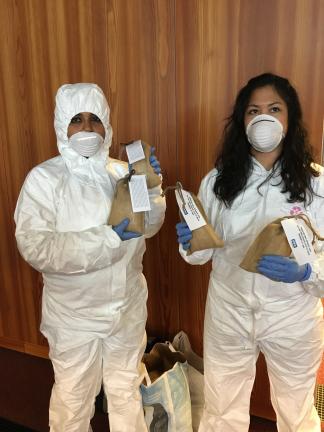 Representatives from IPEN Participating Organizations and Partners in 30 countries met today in Geneva for an IPEN preparatory meeting prior to the beginning of the Meetings of the Conferences of the Parties (COP) to the Basel, Rotterdam and Stockholm Conventions taking place in Geneva, Switzerland. The meetings begin on the 24th of April with a joint session of the three Conventions.

In the run-up to the Basel Convention's 13th Conference of the Parties, IPEN and BAN have released a "Quick Views of Basel Convention COP13." This document is a summary statement of IPEN and BAN views on issues that COP13 will be called upon to address, including E-waste guidelines, illegal traffic, POPs wastes, technical assistance and regional centres, compliance, the Cartagena Declaration, and more.

Led by Red de Acción sobre Plaguicidas y Alternativas en México (RAPAM), IPEN Regional Hub for Latin America and the Caribbean, and Red de Acción en Plaguicidas y sus Alternativas de América Latina (RAP-AL), more then 50 organizations, including NGOs and academics, sent letters to the Argentine, Chilean and Mexican authorities to urge them to support the nomination of paraquat (a toxic herbicide), chrysotile asbestos (a carcinogen) and other substances to be included in Annex III of the Rotterdam Convention. Pressure from the chemical and asbestos industry in the region has been high in an attempt to blockade these nominations.

In the run-up to the Stockholm Convention's 8th Conference of the Parties, IPEN has released its "Quick Views of Stockholm Convention COP8." This document is a summary statement of IPEN views on issues that COP8 will be called upon to address, including POPs wastes, technical assistance and regional centres, rules of procedure, compliance, listing of new POPs (DecaBDE, SCCPs and HCBD), effectiveness evaluation, exemptions and acceptable purposes, evaluation of PBDE, and more.

The Stockholm Convention established a science-based process for new persistent organic pollutants (POPs) under the Stockholm Convention. The Convention recognizes that a lack of full scientific certainty should not prevent a candidate substance from proceeding in the evaluation or listing and clearly mandates Parties to decide on listing “in a precautionary manner.” This new Guide (English /русский /español / français / العربية) highlights three new candidates for listing in the Convention in 2017 - decabromodiphenyl ether (DecaBDE), short-chain chlorinated paraffins (SCCPs), and hexachlorobutadiene (HCBD) - and provides the POPs Review Committee's recommendation for which annex the POPs should be listed under in the Convention, the chemicals' uses, alternatives, adverse effects, and more.

To the EU delegates of the Basel and Stockholm Conventions: Keep the Promise, Eliminate POPs

For a circular economy, it is critical that hazardous substances be eliminated from the circle. Unfortunately, at the international level, the EU has a poor track record on this issue by repeatedly promoting toxic recycling policies under the Stockholm Convention. We urge the EU to take a clear position against recycling materials containing polybrominated diphenyl ethers – PentaBDE, OctaBDE or DecaBDE – at the 8th meeting of Conference of the Parties to the Stockholm Convention (COP8).

The Stockholm Convention requires treatment of POPs waste above the low POPs content level so that it no longer exhibits POPs characteristics. The proposed and provisional levels for polybrominated diphenyl ethers (PBDEs), hexabromocyclododecane (HBCDD), and dioxins and furans (PCCD/F) create a loophole that allows for disposal options that may be less costly initially, but that leave behind substantial POPs residues that result in significant costs and harms to human health and the environment. We request the EU to support low POPs content levels of 50 ppm for PBDEs, 100 ppm for HBCDD, and 1 ng WHO-TEQ/g (1 ppb) for PCCD/F.

At the Basel, Rotterdam and Stockholm (BRS) Conventions Conferences of the Parties, key decisions will be made that define what is included as POPs waste. The definition will be based on a threshold concentration for a range of specific POPs (e.g. dioxin, PCBs, PFOS, etc.) and any waste containing more than that threshold concentration value will be defined as "POPs waste."’ Such POPs waste will be subject to measures as required under Article 6 of the Stockholm Convention to ensure that it is “Disposed of in such a way that the persistent organic pollutant content is destroyed or irreversibly transformed.”

IPEN has developed a briefing paper addressing these threshold concentrations, which are known as Low POPs Content levels. The values that IPEN has proposed to be adopted for Low POPs Content are based on the protection of human health and the environment and on fully referenced, sound science. It should be highlighted that setting strict Low POPs Content levels is virtually the only way to prevent the transboundary movement of POPs waste such as incinerator residues and some electronic-wastes from industrialised countries to lower income countries. IPEN encourages delegates from Parties to the Conventions and observers to review this briefing paper and support the IPEN proposals for Low POPs Content.

IPENers will be participating in the Meetings of the Conferences of the Parties (COP) to the Basel, Rotterdam and Stockholm Conventions taking place from 24 April - 5 May, 2017 in Geneva, Switzerland. Although the Stockholm Convention COP is IPEN’s main focus, IPEN will also participate in the Basel and Rotterdam Convention meetings. Some of IPEN’s partners, such as Pesticide Action Network (PAN), Basel Action Network (BAN), and Rotterdam Convention Alliance (ROCA), amongst others, will also be participating. Some positions and documents from partners can also be found on this site.