In the run-up to the INC4 meeting, IPEN drafted the document "Thoughts about Preparing for the INC4." Read it here: Arabic, Chinese, English, French, Japanese, Russian, Spanish

(Punta del Este, Uruguay) – Although two-thirds of delegates engaged in international negotiations for a proposed mercury treaty support language that would help protect human health and the environment, a small group of developed countries appears to oppose public actions to prevent and reduce exposure to mercury

“We are deeply concerned that, with current text, the treaty may actually legitimize increased global mercury releases to protect short-term economic interests. The price tag may appear to be “cheap,” but the cost of inaction on mercury pollution will be huge,” said Joe DiGangi, IPEN Scientific and Technical Advisor.

No cleanup of contaminated sites nor compensation of victims required

(Punta del Este, Uruguay) Current text released at the 4th meeting for a global, legally binding treaty on mercury, underway in Punta del Este, Uruguay, refrains from requiring obligatory action to clean up contaminated sites. ”This is shocking,” said Jindrich Petrlik (Arnika Association, Czech Republic), Co-Chair of IPEN’s Heavy Metals Working Group, and added, “When contaminated communities ask what actions the mercury treaty requires, we have to answer: Parties will be required and permitted to do absolutely nothing. This is a very disappointing outcome.”

(Punta del Este, Uruguay) – Non-governmental organizations from around the world voiced concerns today that international treaty negotiations on mercury currently underway are likely to fall short of goals and have the potential to increase – not reduce – mercury emissions.

Delegates from more than 120 countries are meeting in Uruguay at the Intergovernmental Negotiating Committee (INC) to prepare a global, legally binding instrument on mercury. Organized by the United Nations Environment Programme (UNEP), this is the fourth meeting in a series of six meetings to negotiate a global, binding treaty to control and end mercury pollution.

Gold Rushes and the Mercury Legacy

At INC4, IPEN exhibited a poster about gold rushes and the contaminated sites created by mercury use during those gold rushes. Focusing on the gold rushes in the U.S. state of California during the 1800′s, the poster, made by California Indian Environmental Alliance (CIEA), highlights the estimated 11,800 tonnes of mercury that were used to extract gold from ore in California. Approximately 4,500 tonnes were lost to the environment in placer mining operations and another 360 tonnes were lost from hard rock mining, creating a toxic legacy that is still being felt today. 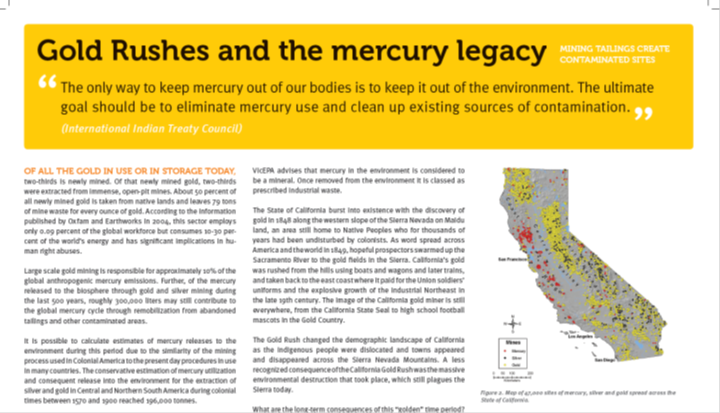 Third meeting of the intersessional process for SAICM beyond 2020

2nd Meeting of the Intersessional Process for SAICM beyond 2020

1st Meeting of the Intersessional Process for SAICM beyond 2020