Dead Sea, Jordan. At the 7th meeting of the Minamata Convention on Mercury, a small group of developed countries opposed prompt creation of guidelines to manage toxic mercury-contaminated sites. Proponents of action expressed concerns over local harm and mercury’s wide ranging impacts as a global pollutant. Fifty-four countries in Africa, 55 countries in Asia-Pacific, and countries in Central and Eastern Europe and Latin America pushed for action. However, the EU blocked consensus on prompt development of guidelines, ensuring years of delay and continuing mercury pollution. 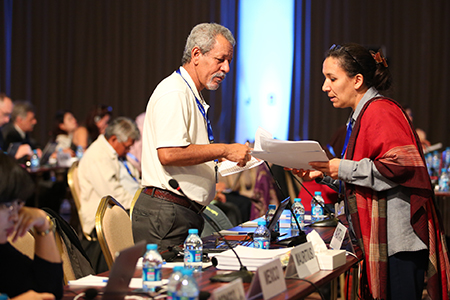 Indonesian NGO BaliFokus organised a photo exhibit in the exhibition area of the meeting venue, showing some pictures of mercury intoxicated suspects, children and adults, from Indonesia's artisanal small-scale gold mining (ASGM) hotspots and the former thermometer factory in Kodaikanal, India. Today Yuyun Ismawati, IPEN Lead on ASGM and Senior Advisor for Balifokus, had an opportunity to brief Fernando Lugris, Chair of the Treaty INCs, about the health impacts of mercury. Ms. Ismawati concluded the briefing by saying, "After miners stop using mercury and switch to a safer alternative, the legacies that remain are: health impacts and contaminated sites." 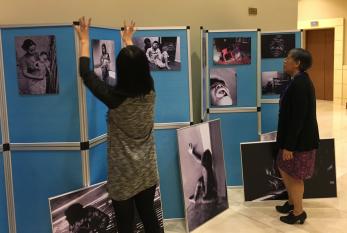 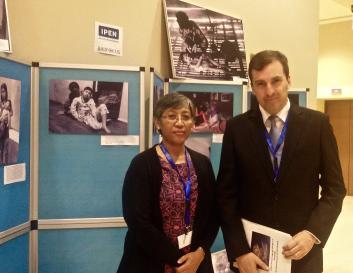 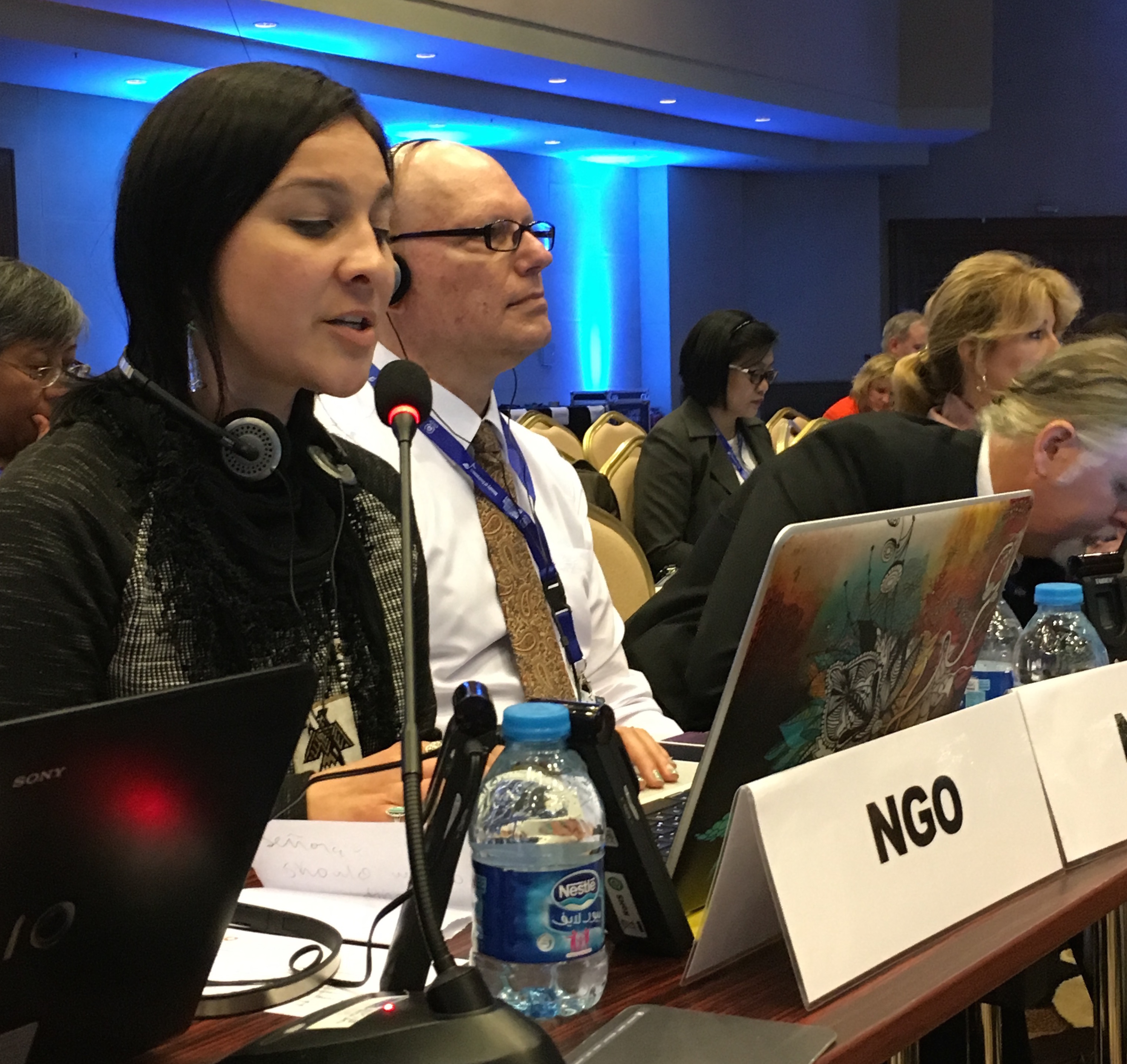 The INC7 opened today and IPEN delivered an opening statement in plenary that noted that, amongst other things, effective, affordable and scientifically sound guidance for the identification and management of mercury contaminated sites is urgently required, and that there is also a requirement for adequate financial resources for those countries most in need to manage contaminated sites in a sustainable manner to protect future generarions. Read the entire statement here. 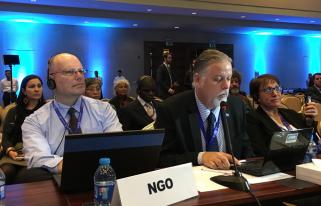 IPEN will be hosting a side event on 9 March from 15:00 - 16:45 in room Harranah 2 in the King Hussein Bin Talal Convention Center. This side event will highlight the latest developments in the guidance for mercury-contaminated site identification, characterization and remediation. It will address issues of relevance to Article 12 of the Minamata Convention and the urgent need to prioritize action to clean up mercury hot spots. In addition, there will be discussion of the challenges involved in the remediation of ASGM sites as well as industrial and legacy sites, with a particular focus on the public health implications of inaction. 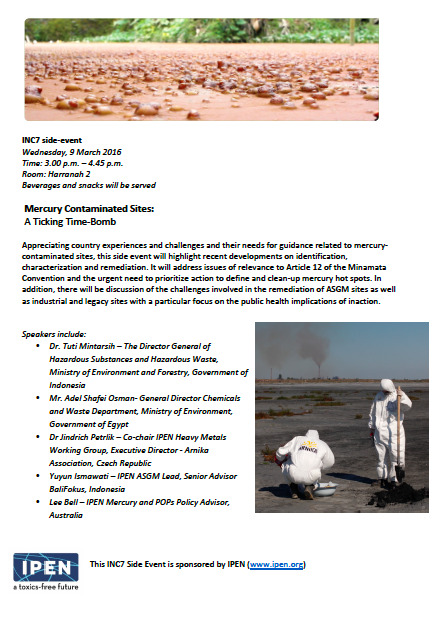 In the run-up to the meeting, which willl take place 10 - 15 March, 2016 in the Dead Sea, Jordan, IPEN has released its "Quick Views" of the Minamata Convention's INC7. This document is a summary statement of some IPEN views about issues that will be taken up at the INC7; including, among others, contaminated sites, artisanal and small-scale gold mining, mercury supply and trade, mercury waste, effectiveness evaluation and finances.

Currently available in English, français and español, the Quick Views will be posted in additional languages shortly.

The seventh session of the Intergovernmental Negotiating Committee (INC7) for the international Mercury Treaty will take place in the Dead Sea, Jordan, from 9 - 15 March, 2016 November, and numerous representatives from IPEN Participating Organizations are participating. 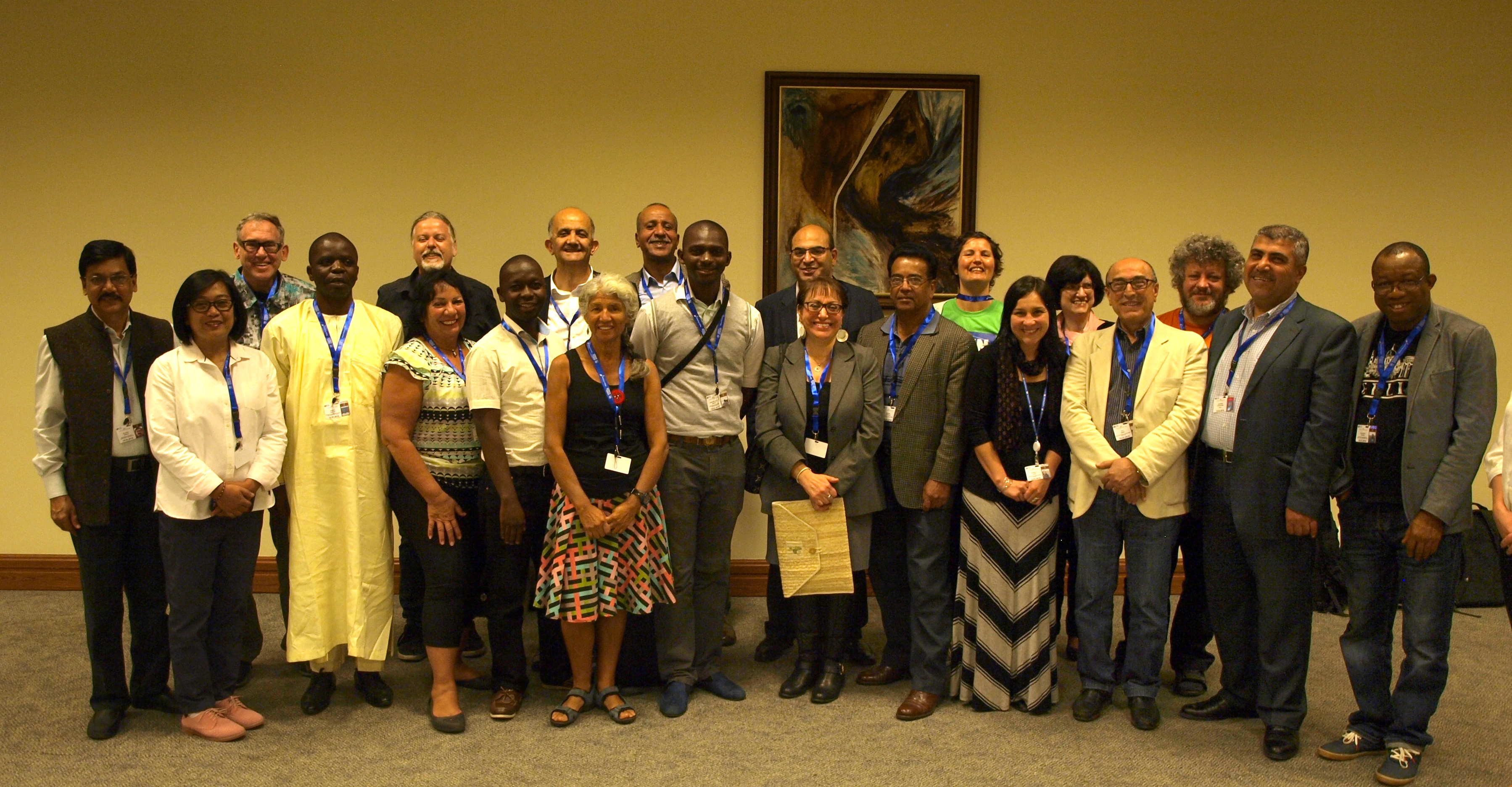