Extent and Use of Non-Chemical Pest Management Alternatives Among Smallholder Vegetable Farmers in Kenya: the Case of Siaya and Migori Counties

This report is an assessment of the non-chemical pest management approaches used by smallholder vegetable farmers in the Lake Victoria region. The report documents the challenges faced by farmers practicing such approaches, as well as the general challenges facing adoption of agro-ecology in the region. The study was conducted as a case study in the counties of Siaya and Migori in the Lake Victoria region, south western Kenya. Information used in this report was gathered through literature review, interviews, field visits, and photography. 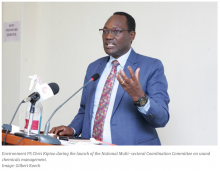 Nairobi, Kenya The government has formed a committee to tackle toxic and hazardous chemicals posing risk to Kenyans.

Globally, nations have put in place measures to manage chemicals through voluntary or legally binding instruments.

Toxic and hazardous chemicals are regulated under Montreal, Rotterdam, Minamata, and Stockholm Conventions.

Though not produced in Kenya, importation of chemicals, export and use is not specifically tracked. 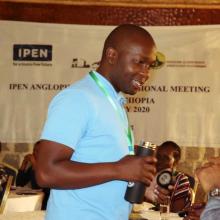 The American Chemistry Council, the lobbying group representing the largest fossil fuel and petrochemical companies on earth, is working behind the scenes “to influence United States trade negotiations with Kenya” aiming to dump the world’s growing colossus of plastic and chemicals waste in Africa, according to reports from the New York Times ("Big Oil Is in Trouble. Its Plan: Flood Africa with Plastic" 30 Aug 2020) and the Associated Press ("Oil companies accused of wanting to dump plastics in Africa." 1 Sept 2020).

IPEN Steering Committee member Griffins Ochieng, of CEJAD (Center for Environmental Justice and Development) commented for both articles. “The chemistry council’s plastics proposals would “inevitably mean more plastic and chemicals in the environment,” said Ochieng. “It’s shocking.” In response to clogged waterways, Kenya imposed a country-wide plastic bag ban in 2017, putting it in the forefront of opposition to plastic waste, which contains toxic additives and can break down into smaller particles that enter food and water systems. “Africa is looking like a new dumping ground, we are not going to allow that,” Ochieng said.

For more on toxic plastics and weak controls on their trade and disposal, visit our Toxic Plastics page.

Phyllis Omido walks through the village of Owino Uhuru. She has been keeping a close eye on the lead exposure that has plagued this settlement since a nearby smelter began operations in 2007.

A Kenyan community whose children and residents were sickened by lead from a battery smelting plant has been awarded $12 million (1.3 billion Kenyan shillings) following a civil lawsuit.

Report shows paints being sold in Kenya in 2017 had dangerously high amounts of lead
Tuesday, 19 November 2019

If your house or building has a coat of paint on it, then you might want to pay a little more attention to this story.

From March 11-15, IPEN participated in the fourth session of the United Nations Environment Assembly (UNEA4) in Nairobi, Kenya from March 11th-15th. The meeting addressed the theme, 'Innovative Solutions for Environmental Challenges and Sustainable Consuption and Production."

For information about IPEN's activities, and for resources related to topics covered, click HERE.

Informal gold miners in Kenya at risk of mercury poisoning

For tens of thousands of people in Western Kenya, gold mining is a way of making a living.

On informal mines across the region, women use mercury to bring out the gold. But a recent study conducted by a network of international charities has found that the chemical could be slowly killing them - and affecting the wider community.

By Deborah Bloom, Special to CNN

Mombasa, Kenya (CNN)On a hot afternoon at a sprawling settlement on the outskirts of Mombasa, Phyllis Omido makes her rounds.

For close to a decade, Omido has been visiting the Owino Uhuru village, monitoring the various illnesses, deaths, and miscarriages that have occurred since a nearby smelter contaminated the village's air and water with lead.

NYATIKE, Kenya (Thomson Reuters Foundation) - Scorching sun beats down on half a dozen women as they carry large sacks of crushed ore on their backs at the Osiri-Matanda gold mine near Kenya’s border with Tanzania.

On wooden tables, they sieve the powdered ore into metal pans, add mercury, and heat the mixture over a charcoal fire. The air fills with fumes as the liquid metal evaporates - leaving behind a lump of gold.