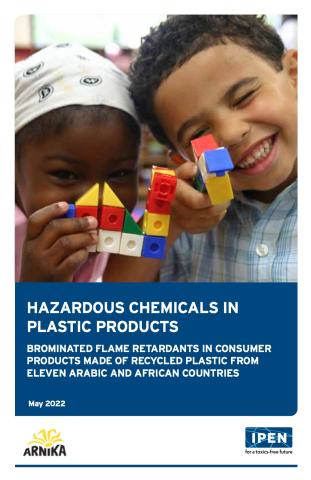 Both the environment in Africa and the Arabic region and the human health of Africans and people from Arabic countries suffer from toxic chemicals and imported wastes, including illegal wastes, more than in developed countries.

This study shows that toxic chemicals are present in toys, kitchen utensils, and other consumer products purchased from African and Arabic region markets in Burkina Faso, Cameroon, Egypt, Ethiopia, Gabon, Jordan, Kenya, Morocco, Syria, Tanzania, and Tunisia. Brominated flame retardants (BFRs) regulated under the Stockholm Convention were found in consumer products from these countries at high concentrations, suggesting that the products were made of recycled plastic from plastic e-waste and end-of-life vehicles (ELVs) — plastics where BFRs are commonly used.

Out of the 83 analyzed products, only 22 had levels of PBDEs below 50 ppm, which means that 61 of them would be considered as POPs waste in Africa when applying the proposed protective concentration limits called the Low POPs Content Levels (LPCLs), defining when waste becomes hazardous waste under the Stockholm Convention. There were also high levels of nBFRs and TBBPA in the analyzed products, which are substances not yet unregulated that may pose significant health risks. Nine samples were also analyzed for brominated dioxins, with findings of much higher levels than in previous studies, on a scale normally found in hazardous wastes.

The present study shows that children’s toys and other products found on the African and Arabic markets are affected by unregulated recycling of e-waste plastics that carry brominated flame retardants into new products. The study demonstrates the need for stricter Low POPs Content Levels (LPCLs) to be applied to waste to stop the flow of e-waste and ELVs plastic into new products made of recycled plastic. Stricter LPCLs can also help to stop the import of POPs waste into African and Arabic countries. African and Arabic countries could then by national law adopt stricter LPCLs and unintentional trace contamination (UTC) limits for BFRs in products.