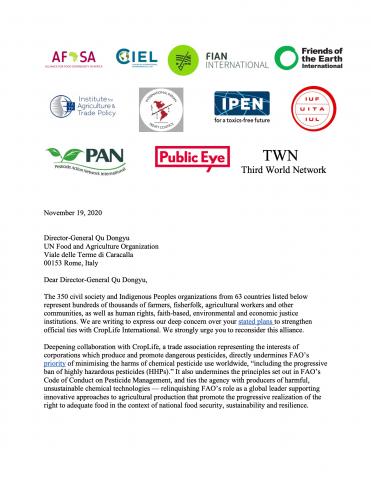 In response to stated plans by the UN Food and Agriculture Organization (FAO) to strengthen ties with a trade association whose members continue to produce highly hazardous pesticides harmful to human health and the enviroment, IPEN and over three hundred other organizations in over 60 countries have sent a letter to Director-General Qu Dongyu opposing the alliance. The proposed collaboration with CropLife — whose members include BASF, Bayer Crop Science, Corteva Agriscience, FMC and Syngenta, and who combined make more than one-third of their sales income from highly hazardous pesticides (HHPs) — directly undermines the FAO's priority of a progressive ban on HHPs, as well as its role as a global leader supporting innovative approaches to agricultural production and advancing food security, sustainability, and resilience.

The letter notes that CropLife members specifically target markets in developing and emerging countries where the regulation and commercialization of pesticides are more weakly controlled, and that sales of HHPs are greater in these parts of the world where harms to human health and the environment are worse. Farmers, agricultural workers, and those living in rural communities suffer increased rates of a broad array of health harms, and decimation of beneficial insects and other organisms have been linked to HHPs.

"We need a strong FAO, independent of the pesticide industry and free from the market interests of global corporations, committed to safe, healthy food and sustainable farming systems for the benefit of all people,” says Susan Haffmans from PAN Germany. “With its commitment to agroecology, FAO has embarked on this sustainable path. The FAO should not jeopardize its successes in agroecology nor its integrity by cooperating with precisely that branch of industry which is responsible for the production of highly hazardous pesticides and whose products contribute to poisoning people and their environment worldwide."

Reliance on hazardous pesticides is a short-term fix that undermines the rights to adequate food and health for present and future generations, as stated in the 2017 report of the Special Rapporteur on the right to food.

“In Latin America, we need policies that support the phasing out of Highly Hazardous Pesticides (HHPs) and scaling up of agroecology. The proposed partnership between FAO and CropLife would undermine this aim," said Fernando Bejarano, Hub coordinator for the IPEN Latin America Office who supervised several HHPs country situation reports in the region.