Lead in Solvent-Based Industrial Paints Sold in the Philippines 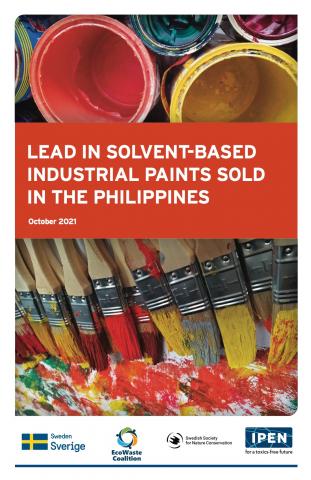 Lead is a toxic metal that causes adverse effects on both human health and the environment. While lead exposure is also harmful to adults, lead exposure harms children at much lower levels, and the health effects are generally irreversible and can have a lifelong impact. Lead paint is a major source of childhood lead exposure.

Most highly industrial countries adopted laws or regulations to control the lead content of decorative paints—the paints used on the interiors and exteriors of homes, schools, and other child-occupied facilities—beginning in the 1970s and 1980s. The Philippines promulgated its lead paint policy in 2013 through a Chemical Control Order (CCO), which prohibits lead in paint above 90 ppm of the total non-volatile content of the dried paint film and provides for phase-out deadlines for different categories of lead-containing paints.

From December 2020 to January 2021, the EcoWaste Coalition purchased a total of 68 cans of solvent-based industrial paints sold in retail stores in 15 cities in the National Capital Region, including Caloocan, Makati, Malabon, Mandaluyong, Manila, Marikina, Muntinlupa, Navotas, Parañaque, Pasay, Pasig, Valenzuela, Quezon, San Juan, and Taguig Cities. Some of the paints were directly ordered from paint manufacturers, and a few paints were purchased from dealers in online shopping platforms. The paints represented 49 different brands produced by 30 manufacturers.

Our results show many lead paints still on the market. 31 percent of paints tested contained lead greater than the regulatory limit. 19 percent had extremely high lead concentrations over 10,000 ppm, and nine samples had over 100,000 ppm.

Read the report for full details and more.