Lead in Spray Paints for Consumer Use in the Philippines 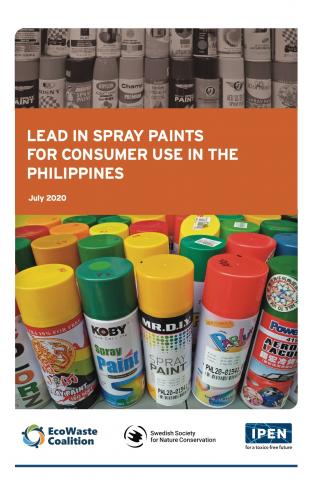 From November 2, 2019 to February 25, 2020, 87 cans of spray paints intended for consumer or general use were purchased by the EcoWaste Coalition from paint, home improvement, general merchandise and office and school supplies stores in 20 cities (12 in Metro Manila and eight other cities in Batangas, Benguet, Cavite, Laguna, Nueva Ecija, Pampanga, Rizal, and Zambales provinces) and one municipality (Baliuag, Bulacan).

The paints represented 37 different brands produced by 23 manufacturers in seven countries, including Canada, China, Indonesia, Malaysia, Taiwan, Thailand and the USA. However, 39 of the samples provided no information as to their manufacturers, importers or distributors, while 43 samples lacked information about their countries of manufacture. Among the lead spray paints detected were products imported from countries with existing legally-binding lead paint regulations such as China and Thailand.

A large number of spray paints tested contain levels of lead much higher than 90ppm, one nearly 1000 times higher.

Click the link below to read the full report.