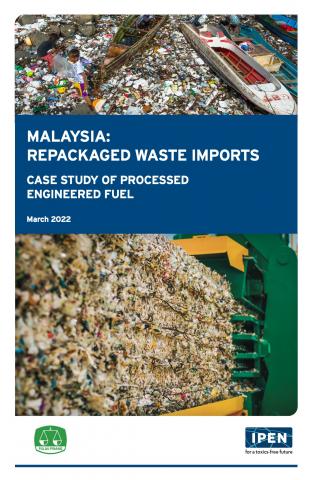 This paper documents the trade of Australian Processed Engineered Fuel (including Refuse Derived Fuel and/or Waste Derived Fuel) exported to Malaysia. In particular the paper will expound on ResourceCo, an Australian company which produces “fuels” from waste and has an alternative fuel processing plant in Ipoh, in the state of Perak, Malaysia.

Ever since China closed its doors to 24 types of solid waste including plastic waste imports from January 2018, the global plastic recycling industry was thrown into chaos, revealing the true cost of rampant plastic production, its consumption, influx of single-use plastics as well as the problems and limitations of global recycling as a solution to the plastic waste problem.

Since then, plastic waste from the largest exporters such as the United States of America (USA), the United Kingdom and Europe has been diverted from China to other countries, which then magnified the problems of plastic pollution in developing countries especially in South East Asia. Malaysia, Philippines, Indonesia, Thailand and Vietnam were receiving waste that is not safely or economically recyclable.

The plastic waste entered developing countries under the pretext of “recycling”. But these countries soon became a dumping ground as the imports included mixed plastic waste, non-recyclable plastic waste, or plastic waste that was significantly contaminated with other wastes; or it contained toxic additives that make safe recycling impossible.

When Malaysia became the largest recipient of plastic waste in 2018, and the issue of illegal plastic waste recyclers, dump sites and open burning were highlighted by affected communities and civil society organizations, it attracted the attention of local and international media.

Read the full report below