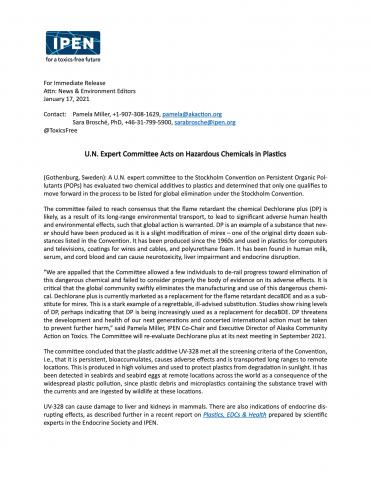 The committee concluded that the plastic additive UV-328 met all the screening criteria of the Convention, i.e., that it is persistent, bioaccumulates, causes adverse effects, and is transported long ranges to remote locations. This is produced in high volumes and used to protect plastics from degradation in sunlight. It has been detected in seabirds and seabird eggs at remote locations across the world as a consequence of the widespread plastic pollution since plastic debris and microplastics containing the substance travel with the currents and are ingested by wildlife at these locations.

UV-328 can cause damage to the liver and kidneys in mammals. There are also indications of endocrine-disrupting effects, as described further in a recent report on Plastics, EDCs & Health prepared by scientific experts in the Endocrine Society and IPEN.

“It´s great to see one more hazardous plastic additive moving forward in the Convention process. This decision is especially important since it highlights that it is not only the visible plastic pieces that now contaminate even the most remote locations of the world, but also the invisible chemicals they carry. Substantial efforts should be made to rapidly phase out hazardous chemicals used in plastics as well as drastically reduce the production of new plastics to protect both public health and the environment,” said Dr. Sara Brosché, IPEN Science Advisor.

Other important decision of the committee at the meeting included:

The week-long meeting of the Stockholm Convention’s expert committee was held online from 11-16 January 2021. The Committee, known as the Persistent Organic Pollutants Review Committee (POPRC), is an expert committee of scientists that reviews chemicals proposed for listing under the Treaty and makes recommendations to the Stockholm Convention Conference of the Parties. Members of the POPRC are government-designated experts in chemical assessment or management.

IPEN is a public interest NGO network working in more than 120 countries to reduce and eliminate hazardous substances. IPEN has been actively involved in the POPRC process for fifteen years.