What Happened at Mercury Treaty COP 4.2 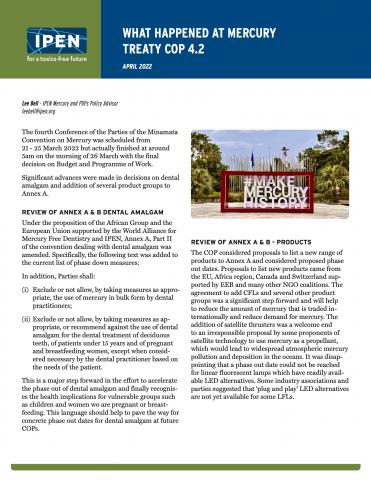 A brief summary of the happenings and outcomes of the Mercury Treaty COP 4.2 meeting in Bali, Indonesia, in Spring 2022, as well as notes about side meetings and future events.

The fourth Conference of the Parties of the Minamata Convention on Mercury was scheduled 21 – 25 March 2022 but actually finished at around 5am on the morning of 26 March with the final decision on Budget and Programme of Work.

Significant advances were made in decisions on dental amalgam and addition of several product groups to Annex A.

Review of Annex A & B Dental Amalgam

Under the proposition of the African Group and the European Union supported by the World Alliance for Mercury Free Dentistry and IPEN, Annex A, Part II of the convention dealing with dental amalgam was amended. Specifically, the following text was added to the current list of phase down measures:

In addition, Parties shall:

This is a major step forward in the effort to accelerate the phase out of dental amalgam and finally recognises the health implications for vulnerable groups such as children and women wo are pregnant or breastfeeding. This language should help to pave the way for concrete phase out dates for dental amalgam at future COPs.

Review of Annex A & B - products

The COP considered proposals to list a new range of products to Annex A and considered proposed phase out dates. Proposals to list new products came from the EU, Africa region, Canada and Switzerland supported by EEB and many other NGO coalitions. The agreement to add CFLs and several other product groups was a significant step forward and will help to reduce the amount of mercury that is traded internationally and reduce demand for mercury. The addition of satellite thrusters was a welcome end to an irresponsible proposal by some proponents of satellite technology to use mercury as a propellant, which would lead to widespread atmospheric mercury pollution and deposition in the oceans. It was disappointing that a phase out date could not be reached for linear fluorescent lamps which have readily available LED alternatives. Some industry associations and parties suggested that ‘plug and play’ LED alternatives are not yet available for some LFLs.

Agreement was reached to add the following products to Annex A:

There was no agreement on the phase out dates for the following products proposed for addition to Annex A. These will be considered again at COP 5.

In accordance with paragraph 3 of Article 26 of the convention, this amendment “shall enter into force for the Parties having consented to be bound by it on the ninetieth day after the date of deposit of instruments of ratification, acceptance or approval by at least three-fourths of the Parties that were Parties at the time at which the amendment was adopted...”. This will be 25 December 2022 for those Parties.

At COP 5 consideration will be given to the production of polyurethane using mercury-containing catalysts to part I of Annex B as it could not be agreed at COP 4. In addition, the COP asked the secretariat to prepare a report on the technical and economic feasibility of mercury-free alternatives for vinyl chloride monomer and sodium methylate production processes.

The COP agreed to adopt the mercury waste thresholds expert group proposal on ASGM tailings whereby all ASGM tailings resulting from processing using mercury are automatically designated mercury waste without the need for thresholds. Non-ASGM mining tailings are dealt with differently and the proposed two-tier threshold was adopted. In this case tailings from mining other than ASGM will first be subject to a total threshold concentration test. If the tailings exceed 25 mg/kg total mercury they are subject to a second test based on leachable limits with a 0.15 mg/L threshold. If both limits are exceeded, then the tailings are designated as mercury waste.

For Category C waste (waste contaminated with mercury other than tailings) The COP could not agree on the 25 mg/kg total threshold concentration limit proposed by the EU. Several parties and the Africa Region agreed that the level was too high to adequately protect the health of humans directly exposed to certain wastes containing mercury. For that aspect of waste thresholds, it was decided to send the matter back to the expert group for further consideration intersessionally along with an examination of the types of wastes that typically may be the source of high exposure to some populations – particularly in developing countries without ESM systems for waste. This was an outcome that IPEN supported.

Several parties welcomed the addition of extra health related guidance for ASGM NAPs provided by the WHO. In addition, the new guidance section on how to manage ASGM tailings was supported, however IPEN has reviewed the guidance and it seems that the options presented require the kind of resources and equipment that is not available to most ASGM miners. A positive feature that came out of the discussions was that the COP called on parties in decision CRP 10 to engage with indigenous peoples, local communities, and other relevant stakeholders in the development and implementation of national action plans. This is an important signal to prioritise the human rights issues that deeply affect indigenous peoples in ASGM regions.

With time running out to begin the effectiveness evaluation process of the convention (it must be started by 2023) there were intense negotiations regarding the composition and roles of the Open-Ended Scientific Group (OESG) which would advise the Effectiveness Evaluation Group (EEG) once the process of effectiveness evaluation data gathering has begun. The main challenge to arriving at a decision was the number of members who would represent each region on the EEG.

The final decision taken at 3am on Saturday morning was that the COP:

National reporting was discussed in plenary and parties were congratulated for the high reporting rate for the long format reports which were due in December 2021. An analysis of those reports and earlier short reports will be generated by the secretariat for COP 5 and presented as a synthesis report.

The meeting decision on this agenda item included:

In a meeting between the NGOs delegates and Monika Stankiewicz, Executive Secretary of the Minamata Convention on Mercury on 24 March 2022, the Secretariat mentioned the idea to invite observers to monitor countries national reports and helped verify the reports. Further details of observer’s involvement in national reporting will be provided later this year.

Discussion on releases centred around the introduction of the new guidance on methodology for identifying and developing an inventory of mercury releases.

The final decision of the COP was to:

After discussion of the activities of the secretariat to mainstream gender in its policy and programmes (including project proposals for the SIP) a decision was taken that:

Budget and Programme of Work

The Budget and Programme of Work decision was the final decision of the COP and was delayed significantly by the early morning negotiations on Annex A & B, Effectiveness Evaluation, and waste thresholds, all of which had budgetary implications.

On the first day of COP 4.2 Minamata Convention, the Indonesian government, represented by the Minister of Environment and Forestry Dr Siti Nurbaya Bakar, introduced Bali Declaration on combatting illegal trade of mercury as a political declaration.

Although the draft Declaration was already shared in October 2021 during the COP 4.1, and then had two rounds of consultations until 15 February 2022, there was no consultation of the final drafts with inputs from stakeholders. It was not clear which countries or regions supported the Bali Declaration and the follow up actions of the declaration.

In a meeting between the NGO delegations with the Indonesian delegates one day before the COP 4 started, there was no further explanation about Indonesia’s efforts in combatting the illegal trade of mercury and closing the cinnabar mining in the eastern part of Indonesia.

Meeting with the CEO of GEF, Carlos Manuel Rodriguez

On 23 March, the CEO of GEF, Carlos Manuel Rodriguez, invited the NGOs delegates to have a dialogue with him. He wanted to learn more about the NGOs involvement in advancing the Minamata Convention. Twenty NGOs attended the meeting with the GEF’s CEO in the NGO meeting room. Mr Rodriguez reminded the NGOs that the GEF supported civil societies and the impacted communities to implement the mercury treaty through the SGP.

From observers’ point of view, COP 4 Minamata Convention’s logistical arrangements were not satisfying. The visa applications took more than two weeks to approve and the payment via online banking system failed in several countries. Some NGOs obtained their visas after they arrived at the conference venue.

On accommodation, there was a confusion about the special rates for COP 4 delegates which was announced in the Information for Participants of COP 4. Some NGOs could not get the delegate’s rate and had to pay the ‘normal’ rates.

Next meeting of the COP

It was tentatively proposed that the next meeting of the COP should take place 28 October - 3 November 2023 in Geneva, Switzerland.

The President of COP 4, Rosa Vivien Ratnawati, handed over the COP Presidency to Romania, Claudia Dumitru.