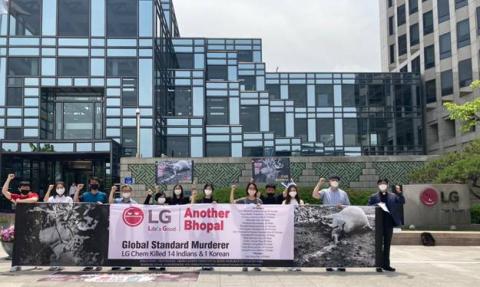 Asian Network for Rights for Occupational and Environmental Victims (ANROEV) organized the events and prepared this video of events around Asia.

Due to time zones, Korea started first with a press conference in front of LG headquarters in Seoul.

The event began virtually with Mr. Rao from the Vizag community impacted by LG's lethal styrene release. Additional speakers included a worker safety advocate from an industrial zone in Korea which had a styrene release last year. A victim of LG's humidifier disinfectant product also spoke, along with a professor of public health from Seoul National University. IPEN gave a short summary of an Indian government report that exposed the company's disregard for safety measures.

Later in the morning, members of the Vizag community in India that experienced the toxic release held a demonstration to push LG to be responsible. Their goal was to form a large human chain. There was another protest earlier in the week on Monday as well.

Unfortunately, the police quickly closed in on the event and The Hindu reported that 150 people were arrested - including Mr. Rao who spoke virtually at the event in Korea. Mr. Rao asked the newspaper, “Why should we be arrested for the negligence of an MNC?”