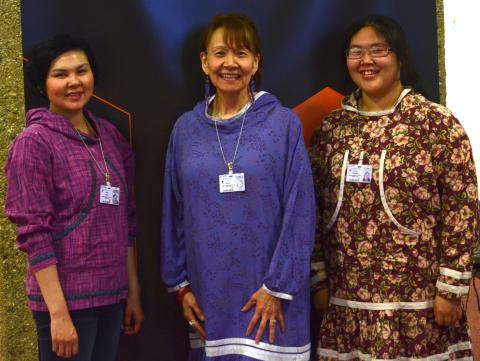 Vi Waghiyi (July 7, 2015): Sometimes when you live in a small, remote town you need support beyond your community to take care of your family and well-being. Savoonga is a traditional Yup'ik community on St. Lawrence Island in the northern Bering Sea, just 40 miles from the Chukotkan Peninsula of Russia. For much of the year we are surrounded by sea ice. Like our traditional Siberian relatives, we rely on bowhead whale, walrus, seals and other customary foods for most of our diet. But, recently, we relied on the peoples of Ghana, South Korea, El Salvador, Brazil, Switzerland, Norway, and over 80 other nations to support our health. Together, our work improved health globally, through a United Nations vote that banned the chemical pentachlorophenol.

Pentachlorophenol, or PCP, now joins the list of chemicals banned under the Stockholm Convention on Persistent Organic Pollutants, known as the POPS Treaty. More familiar names already subject to the treaty include DDT, PCBs, and dioxin. The world is a healthier place for it.

Persistent organic pollutants are chemicals that persist in the environment and bio-accumulate through the food web. They contaminate our human blood and breast milk without our consent, and are associated with a range of harmful health effects including learning and developmental disabilities, endocrine disorders, and cancers.

Accumulation of POPs in northern latitudes is a well-documented phenomenon. Prevailing ocean and wind currents carry contaminants into the Arctic where they are subsequently trapped by the cold climate. As early as the 1970s, DDT and other persistent pollutants were detected in Arctic species including polar bears, whales, and fish.

These dangerous contaminants accumulate in the marine mammals that are so important to Arctic survival and central to the diets of Arctic indigenous peoples.

Whether in Russia, Alaska or beyond, Arctic peoples suffer many health disparities including high rates of cancer and birth defects. The International POPs Elimination Network found adverse impacts on women’s reproductive health and on newborn children among Russian Arctic indigenous people, even with relatively low levels of POPs in their blood. Although Arctic children live very far from where these chemicals are produced, we know the recently banned pentachlorophenol is found in our traditional foods and in our bodies. These pollutants are known to pass from mother to child through breast milk.

The Stockholm Convention preamble acknowledges “Arctic ecosystems and indigenous communities are particularly at risk” and “contamination of their traditional foods is a public health issue.” In fact, the discovery of PCBs in the breast milk of Arctic mothers at levels up to 10 times higher than in women living in lower latitudes was one of the original motivations for creating the Stockholm Convention to reduce and eliminate the burden of these harmful chemicals worldwide.

While the delegates from far-flung nations of every possible climate showed leadership by globally banning PCP, there is much more to do.

The United States is one of only a handful of nations which have not signed the Stockholm Convention, and so is not bound by this latest ban. The U.S., along with Canada, remains the highest user of this toxic chemical.

Once used broadly in agriculture, PCP was already banned in many countries because of its high toxicity. It is now mostly used to treat utility poles. Less dangerous, modern alternatives exist. The U.S. Environmental Protection Agency should take this opportunity to rise to the standards set by the rest of the world by phasing out the use of PCP.

I proudly traveled as far as I could imagine from my Bering Strait home to Geneva, Switzerland to represent Arctic indigenous peoples seeking to ban this chemical. I know my gratitude is shared by my Russian indigenous colleagues from across the Bering Strait who face similar health disparities, but were denied visas and unable to participate.

For the health and well-being of our indigenous peoples, all peoples of the earth, and future generations, I would like to offer a thank you to everyone who helped to ban this unnecessary and dangerous, toxic chemical. I can’t possibly express this in each of your languages. So please accept this instead.

Born in Savoonga on St. Lawrence Island, Vi Waghiyi is environmental health and justice program director at the Alaska Community Action on Toxics and a Yup'ik grandmother. She serves as advisor to the National Institute of Health and has been cited for her work by the Alaska Native Tribal Health Consortium.

Dr. Olga Speranskaya contributed to this commentary. A physicist from Russia, she directs the International POPs Elimination Network. She received the 2009 Goldman Environmental Prize for her work to rid the former Soviet Union of toxic sites.

The views expressed here are the writer's own and are not necessarily endorsed by Alaska Dispatch News, which welcomes a broad range of viewpoints. To submit a piece for consideration, email commentary(at)alaskadispatch.com.