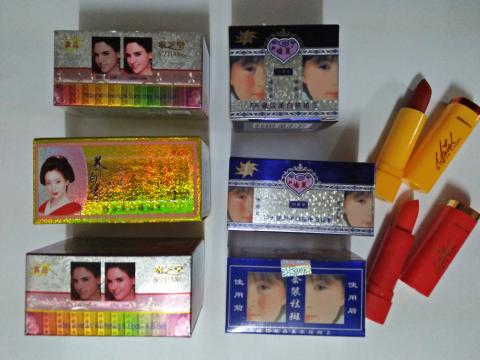 3 September 2018, Baguio City/Quezon City.  The Baguio City Government is being urged by an environmental health NGO to crack down on the unlawful sale of cosmetics containing chemical poisons such as lead and mercury.

Through a letter e-mailed to the office of Mayor Mauricio G. Domogan, the Quezon City-based EcoWaste Coalition reported the sale of contraband skin whitening creams and lipsticks that are laden with lead and mercury – two of the “ten chemicals of major public health concern” as per the World Health Organization (WHO).

“We respectfully request your office to take immediate action to stop the illegal sale of mercury and lead contaminated cosmetics in Baguio City.  Your immediate action will protect the health of your constituents, particularly women and girls, from being exposed to these dangerous substances,” wrote Thony Dizon, Chemical Safety Campaigner, EcoWaste Coalition.

“Your action will support the FDA’s relentless drive to rid the market of cosmetics with heavy metal impurities and other contaminants,” he added.

“As the Jiaoli and S’Zitang whitening creams we bought are already among those banned by the Food and Drug Administration (FDA), the high mercury content of these products in the range of 319 to 3,863 parts per million (ppm) came as no surprise,” said Dizon, who also noted that the analyzed creams came with a list of ingredients on the package insert, but none listed mercury as an ingredient.

The ASEAN Cosmetic Directive has put a trace amount limit of 1 ppm for mercury in cosmetics.  Also, the Minamata Convention on Mercury that the Philippine government signed in 2013 requires the phase-out by 2020 of cosmetics, including skin lightening products with mercury above 1 ppm.

Lead above the 20 ppm limit under the Asean Cosmetic Directive was also detected in the sampled lipsticks.  Two counterfeit MAC Mariah Carey lipsticks showed outrageous concentrations of lead at 11,200 ppm and 42,800 ppm.  The two lipsticks also had arsenic, chromium and mercury above levels of concern.

The EcoWaste Coalition pointed out that none of the samples had the required market authorization from the FDA in the form of a cosmetic product notification and are therefore illegal to sell.

The FDA has repeatedly warned that “cosmetics without FDA notification should not be sold, nor offered for sale to or use by the consumers” to protect the public against adulterated, contaminated, harmful and inferior products.

According to the WHO, “exposure to mercury – even in small amounts – may cause serious health problems, and is a threat to the development of the child in utero and early in life.”  Mercury in skin lightening creams and soaps, can damage the kidneys, according to the WHO.  Mercury in products may also cause skin rashes, skin discoloration and scarring, as well as reduce skin’s resistance to bacterial and fungal infections, the WHO said

Lead, which like mercury, is not allowed in cosmetic product formulations, “is a cumulative toxicant that affects multiple body systems, including the neurological, hematological, gastrointestinal, cardiovascular and renal systems” as per the WHO, which has also warned “there is no known level of lead exposure that is considered safe.”