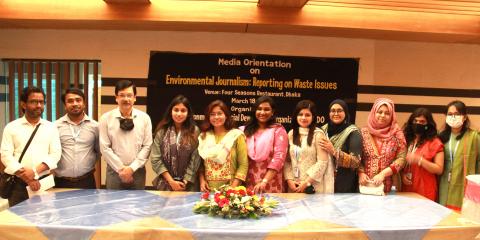 Dhaka, Bangladesh Hazardous plastic waste is a global threat, but smaller countries face increasing pressure to accept waste from large waste producers, such as the European Union and the United States. In Bangladesh, a recent event brought together journalists and experts seeking to halt illegal trade in waste. Organizations are working to urge the government to ratify the Basel Convention Ban Amendment to protect Bangladesh from hazardous plastic waste.

"Bangladesh is a signatory to Basel Convention but it did not sign the Basel Ban Amendment that deals particularly with wastes and hazardous wastes management and its transboundary movement. It is high time to adopt the ban amendments to tackle this toxic situation," said Dr Shahriar Hossain, secretary general of the Environment and Social Development Organisation (ESDO), which recently released a study "Transboundary Movement of Plastic Waste: Situation of Bangladesh". The event was co-sponsored by the Global Alliance for Incinerator Alternatives (GAIA).

ESDO's report revealed that everyday Bangladesh generates 3,000 tonnes of plastic waste, yet the country receives over 20 times that amount — as much as 73,000 tonnes — from other, "upstream" countries. In the last three years, such waste amounted to 1.2 million tonnes of plastic waste from developed countries like the USA and the UK. Plastic waste can contain hazardous chemicals, endangering local waste pickers, polluting air and soil when burned as a fuel source, or reentering commercial products through recycled materials. The Basel Convention obliges parties to reduce hazardous waste, manage it locally, and limit its movement across borders. The Ban Amendment prohibits member states of the EU, OECD, and Lichtenstein from exporting hazardous wastes to other countries, especially to countries that lack the capability to manage the waste.

The event included a briefing to journalists on the issues covered in the report. Experts present at the press briefing urged the government to adopt the Basel Convention Ban Amendment into the national jurisdiction. ESDO's Chairperson Syed Marghub Morshed and Executive Director Siddika Sultana presented along with several international experts who joined via zoom, including: David Azoulay, managing attorney and director of the Environmental Health Programme for the Center for International Environmental Law (CIEL) in Geneva; Jim Puckett, founder and executive director, Basel Action Network (BAN), USA; and Sirine Rached, global policy advocate, Global Alliance for Incinerator Alternatives (GAIA), USA.

The event received wide coverage by the press, including articles in the Business Standard and the Financial Express.