'Hawaii needs to address this because the Navy doesn't have any intention of cutting this back,' said Colby Self of the Basel Action Network

However, the Basel Action Network claims dangerous polychlorinated biphenyls, or PCBs, are going down with each sunken ship. Under a waiver from the Environmental Protection Agency, the Navy can leave as much as 100 pounds of PCBs on each ship before it's used for training known as SINKEX. 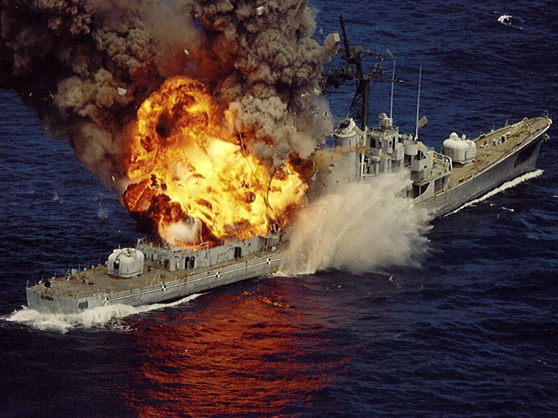 "Materials don't have to be removed if you have to scrap, blast, use chemical stripping (or) remove heavy equipment," said Colby Self, director of Basel's ship recycling campaign. "Virtually, you don't have to remove anything. So, the Navy gets to determine what they remove."

Banned by Congress in 1979 and the Stockholm Convention on Persistent Organic Pollutants in 2001, PCBs are known to enter the food chain and cause birth defects.

"Infants have been known to take higher levels of PCBs through breast milk, and so our most vulnerable populations are most subject to PCB uptake," said Self.

On Thursday evening, the Navy sank the decommissioned USS Ogden 60 miles northwest of Kauai as part of RIMPAC 2014, a biennial naval exercise involving 22 countries, more than 40 ships and submarines and 25,000 personnel. Two more ships are scheduled to be sunk next week, but the Navy won't release exact dates or locations.

In a statement to KITV4, U.S. Navy Third Fleet spokeswoman Lt. Lenaya Rotklein said each SINKEX vessel undergoes a rigorous cleaning that includes removal of all liquid PCBs from transformers and capacitors to the greatest extent practical.

"Each SINKEX is conducted in strict compliance with applicable U.S. environmental laws, regulations and permit requirements to minimize potential harm to the environment," said Rotklein.

Other restrictions require the Navy to carry out ship sinkings at least 50 nautical miles from any coastline at depths of at least 6,000 feet. The Ogden was sunk at a depth of 15,000 feet.

Nonetheless, an Associated Press review of the Navy's year-end reports on ship sinkings from 2000 to 2012 found incomplete estimates of PCBs and other toxins.

Meanwhile, a five-year study by the EPA and the Florida Fish and Wildlife Conservation Commission showed increased levels of PCBs in nearby fish after the USS Oriskany was sunk off Pensacola in 212 feet of water. According to the study, 21 percent of all fish sampled post-sinking had PCB concentrations above 50 ppb, the fish advisory threshold for the Florida Department of Health.

"Even five years later, they were still being taken up by fish at that reef site at volumes that were not acceptable for human consumption," said Self.

With one ship still left to be sunk as part of RIMPAC 2014, the Basel Action Network is urging Hawaii residents and lawmakers to learn more about ship sinkings and the potential harm to the environment.

"Hawaii needs to address this because the Navy doesn't have any intention of cutting this back," said Self.

"I think that the White House really does need to evaluate to ensure that their policies are consistent, and right now they are not," said Self.

According to the environmental group, at least 118 ships have been sunk by the Navy since 2000. In addition to environmental concerns, the organization says the decommissioned ships could have been recycled and provided jobs to out-of-work Americans.

Basel Action Network has an online petition at Change.org that demands the Navy follow all environmental laws like every other U.S. citizen.

CORRECTION: An earlier version of this story stated two more ships would be sunk during RIMPAC 2014.