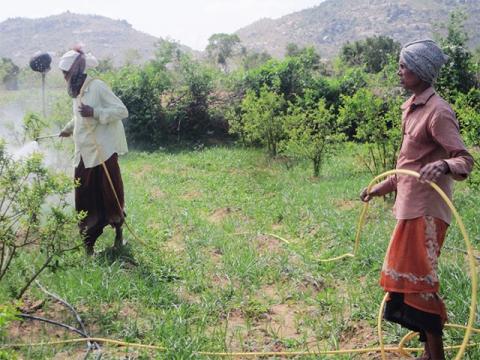 Majority of Highly Hazardous Pesticides are sold by the top 5 agrochemical companies to developing countries such as India, a joint investigation by Unearthed and Public Eye shows. (Photo credit: SAHANIVASA)

PAN Asia Pacific (PANAP) expressed alarm at a recent investigation that more than one-third of the income of the top five agrochemical companies comes from the sales of Highly Hazardous Pesticides (HHPs).

In a joint investigation by Unearthed and Public Eye, it was revealed that in 2018, Bayer-Monsanto, BASF, Syngenta, FMC and Corteva (formerly Dow and DuPont) sold $4.8 billion worth of products that contain HHPs, or pesticides that are highly hazardous to people, animals or ecosystems.

For instance, in Germany, where Bayer and BASF are based, only 12% of CropLife pesticide sales are highly hazardous, since most HHPs are banned here. In contrast, many countries in the Asia Pacific region have a big share of these companies’ HHPs sales, including India (59%), Thailand (49%), Vietnam (44%) and China (31%).

“Clearly, double standards exist wherein Highly Hazardous Pesticides are more rampantly sold and used in poorer countries that have weaker regulations. In our monitoring of pesticide-affected communities in the Asia Pacific region, the ‘safe use’ of such pesticides that the industry insists on does not exist. Entire farming families are exposed through direct contact, aerial drift, and ground and water contamination,” said Sarojeni Rengam, PANAP executive director. 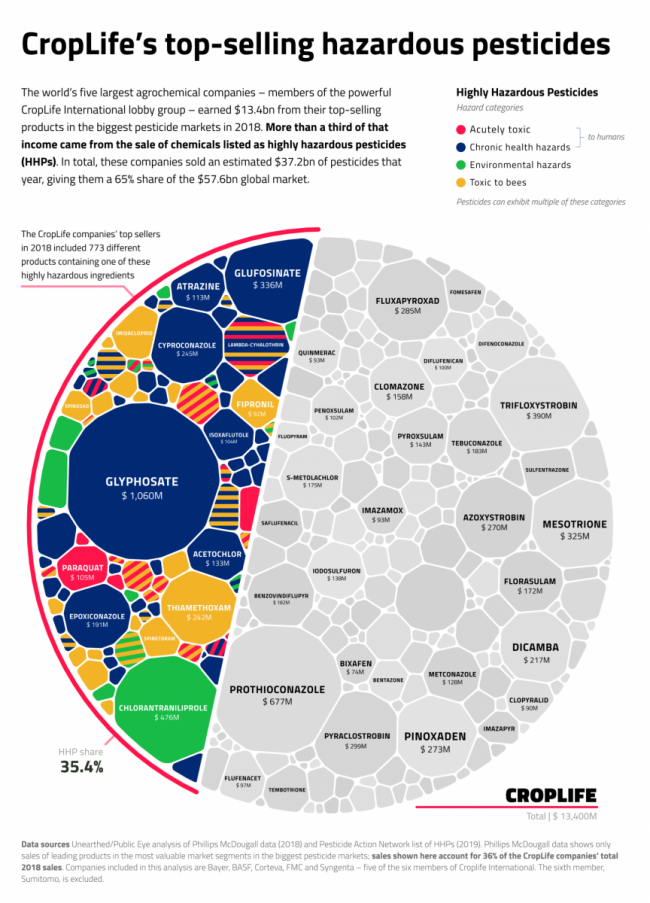 The investigation revealed that CropLife members made almost $3 billion from pesticides found by regulators to pose chronic health hazards, such as BASF’s weedkiller glufosinate and Corteva’s fungicide cyproconazole, both classed by EU regulators as damaging to fertility, sexual function or the unborn child. But the companies’ biggest seller was glyphosate, amassing $1.06 billion in sales. Glyphosate is classified by the International Agency for Research on Cancer as a “probable human carcinogen” and the subject of thousands of cancer claim lawsuits in the US.

The investigation further showed that 10% or $1.3 billion worth of the five companies’ income were from neonicotinoids and other pesticides that are responsible for the mass death of bees—a severe food security and biodiversity threat. For instance, the neonicotinoid thiamethoxam was Swiss company Syngenta’s top-selling HHP in 2018, amassing $242.5 million in sales.

“These agrochemical companies must be made accountable for environmental destruction and human rights violations associated with the use of Highly Hazardous Pesticides. There must also be a global governance mechanism on pesticides that allows for stricter regulation, and that works towards a global ban of HHPs. Otherwise, this unbridled profiteering from poisonous chemicals will continue unchallenged,” said Rengam.

Pesticide Action Network, which came out with the HHPs criteria used in the investigation, is pushing for a legally-binding global governance mechanism on pesticides. It is also calling on policymakers to institute efforts to replace chemical-intensive agriculture with agroecological practices.