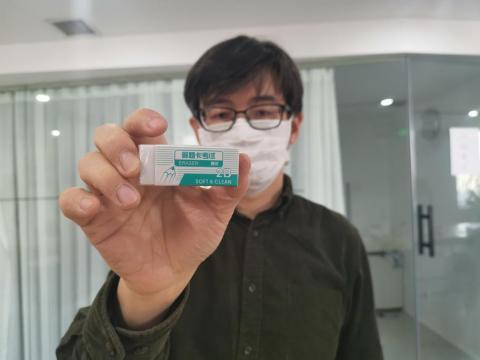 Shenzhen, China – While many parts of the world are still in throes of COVID-19, many Chinese schools have been resuming classes as the epidemic looses its grip on China. For Chinese parents, however, aside from the deadly pandemic caused by a novel coronavirus, they may have to have at least one more concern for their children - the eraser.

For juveniles, PAEs could cause damages to the liver and kidney and may also result in sexual precocity. The substance could also affect female reproductive health and increase breast cancer risk for women. What’s more, birth defects may occur because of pregnant women’s exposure to it.

Xu Shan, a chief physician from Hangzhou Amcare Women’s and Children’s Hospital in Zhejiang provincial capital Hangzhou, said the safety hazards from PAEs have been verified both in experiments and clinical big data analysis.

Experiments done on animals home and abroad have shown that, if animals intake the substance for an extended period of time, their reproductive capabilities will be damaged and there will also be higher occurrence of birth defects, he said.

He said clinical analysis using big data technology also found that the increasing incidence of hypospadias for newborn baby boys and the continuous decline of female reproductive capability are related to the accumulation of plasticizer in the environment.

He calls on the authorities to draft relevant laws as soon as possible to restrict the use of PAEs to protect people’s health.

Mao Da, executive director of Toxics-Free Corps, said the lack of compulsory standard for chemical contents is one of the factors to blame for the excessive amount of PAEs in erasers.

Ms Wen Ruihuan, the manager of the campaign added that the toxic chemical problem of eraser was closely link to the polyvinyl chloride (PVC) plastic material use, because half of the 86 samples are PVC products, and all samples that contain PAEs are PVC based. She therefore alerted that consumers need to avoid buying PVC erasers and pay greater attention to the labelling information of the products.

Toxic-Free Corps has received contrasting official responses from two Japanese eraser producers. UNI replied earliest and made clear its commitment to voluntarily stopping selling all products in which phthalate content exceeds China’s industry group standard limit. KOKUYO, on the contrary, refused to take NGO’s suggestion and emphasized that their products still complied with all Chinese regulation.

Read the article in Chinese on Toxic-Free Corps' web site.

[1] In all 62 eraser samples, the detection rate of PAEs is 34%, the exceeding rate for industry group standard is 29%, the average PAEs level of exceeding samples is 361 times the standard limit, and the maximum level is 913 times the limit, which indicates that the problem of toxic plasticizer of eraser products is really serious, which may pose a higher health risk to users, especially young children.

[2] All eraser samples with phthalate detected or exceeding the standard are made of PVC, which indicates that PVC eraser has higher risk of toxic plasticizer exposure than non PVC eraser.

[3] The rate of effective labelling or information disclosure of the material and chemical use of the eraser samples is less than 30%, which indicates that the consumers' right to know about the quality and safety of the eraser products is not guaranteed as a whole.

[4] The current national standards or industry recommended standards for erasers are seriously deficient in the control of toxic plasticizers, which makes such products still unable to get rid of the pollution of phthalate, a chemical with high environmental health risk; the industry association group standard with the content of 6 kinds of phthalate limit has advocacy and leading role in the green production of eraser products, but it is note able to achieve the total phase-out of PAEs and PVCs use in eraser production.

[5] Some eraser samples sold by E-commerce are inconsistent with the test results of the same type of products sold from flagship stores or exclusive stores of the brand, which indicates that there may be counterfeiting products, which needs to be noticed by relevant parties.

[1] Consumers have priority in purchasing non-phthalate plasticizers and non PVC erasers. When purchasing, please refer to the "white list" given in this survey. Parents should pay attention to whether children have the habit of licking, sucking and chewing stationery. If there is such a situation, please correct it immediately.

[2] Stationery manufacturers actively follow the industry group standard TCSSGA 1002-2017 "Eraser" and the national standard GB 21027-201x "General requirements for the safety of student supplies (Draft for approval)", to ensure that phthalate plasticizers do not exceed the standard. At the same time, formulate a schedule for PVC phase-out and non-toxic substitution of eraser products, and make relevant plans public.

[3] National Professional Standardization Techniques Commission shall complete the revision of GB 21027-2007 General requirements for the safety of student supplies as soon as possible, and add the limit provisions for toxic and harmful chemicals such as phthalates and polycyclic aromatic hydrocarbons_

[4] The Ministry of Ecology and Environment comprehensively assessed the chemicals with high risks to the ecological environment and public health, including phthalates, and listed them in the list of priority controlled chemicals as soon as possible, so as to control the toxic and harmful chemicals from the source.

[6] All parties work together to promote the safety standards of eraser and other student supplies, promote brand makers and manufacturers to follow the industry's high standards, advocate the public to buy safety products, and better protect the health of young children and the public.