The downside of plastics recycling: toxins in children’s toys 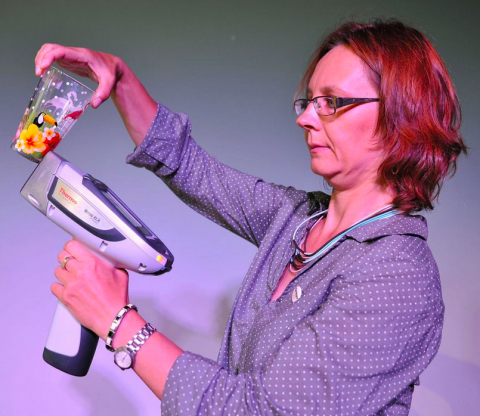 The Czech environmental group Arnika is ringing alarm bells. According to the results of a recent study it conducted, some children’s toys and grooming accessories, such as hair brushes, sold in the EU contain toxic substances. Arnika’s Karolína Brabcová says this is an unfortunate side product of the drive to promote plastics recycling.

I would have expected the EU to be particularly strict as regards the presence of toxins in toys. How do these toxins get there?

“Their presence shows that we come into contact with recycled plastics. The EU has been pushing for the promotion of recycling for quite a long time and it is a very good strategy to save resources, however the presence of brominated flame retardants – and some of them have been banned in the EU for quite some time – shows that these toxic chemicals are actually entering the recycling stream and coming back to the EU in new products. And given the fact that brominated flame retardants are only put into products where it is important to lower the fire hazard we must conclude that these toys and other products were made of recycled materials and plastics because there is no need to put flame retardants in toys or grooming products.”

Is there no control over this process? Over what is recycled and where it ends up and the fact that it shouldn’t end up in children’s toys…

“That is an issue that Arnika has taken up. There is a very strong push for recycling, as I said before, however the EU has been pushing on the global level to make exemptions for these banned toxins, for example for some of these PBDEs there are exemptions where countries are allowed to put plastics which would otherwise be regarded as hazardous waste into the recycling stream and to let them be recycled for a certain period of time. And what we are saying is that this is a wrong process because we are promoting and perpetuating this type of contamination and what we are seeing is that consumers and especially parents are very concerned about the problem. In order for consumers to promote recycling and for it to be successful we need to make sure that these types of chemicals are not allowed to enter recycling streams.”

“Another thing which is also really important, but which is a long-term process, is that the EU looks into the proper and correct implementation of EU legislation. What I am pointing at is that we have very strict and progressive chemical legislation in place in the EU, however the process of implementation is fairly slow. There is a strong push from especially chemical companies to not restrict those chemicals, which we know are hazardous, from production, we see them pushing for exemptions for certain types of products. The problem is that for the downstream users and for the recycling companies this is a very bad strategy. If we keep using these toxins in specific products we will have a big problem in the long-term perspective.”

Are you saying that the EU authorities are aware that this is happening?

“Yes, yes, basically they are and we have been told that there is a controversy over this, or that there are two strategies that go against each other. On the one hand we are promoting recycling and we want plastics to be re-used, but on the other hand we see that plastics made long ago – let us say ten or twenty years ago – contained chemicals that are now banned. And what we are saying is that it is not either/or but that there should be a strategy which will promote recycling, but will also promote technologies which allow recycling companies to decontaminate the plastics from the toxic chemicals in them.”

You say that some of these toxins exceed permitted levels in certain toys and hair accessories. Are these products made in the EU?

“That is hard to say. Many of the products that we tested were made in China, however we have case studies from the Czech Republic where recycling companies in the Czech Republic collect separated waste and make new products out of it such as flooring for agricultural companies, for horse stables and so on and we see that these products are also contaminated with toxic chemicals. So it is not just a problem of imported goods, but of the whole recycling stream where the waste which is really cheap is taken especially by East European companies who make products out of it and who do not see the danger of contaminating their products with toxic chemicals.“

When we are talking about flame retardants and other toxic chemicals in toys – what are the health hazards?

“There are neuro-developmental risks, especially for children. There are risks that their immunity might be impaired, the toxic chemicals in flame retardants are linked to attention disorders and other civilization disorders which we now see very often in children.”

This is disturbing news for parents. I don’t know what kind of toys you tested – but how can one tell which products are safe for children?

“We tested toys for children of pre-school and school age. It is very difficult for the consumer to tell which toys are dangerous and which are safe. What we did is we chose products made of black plastic. Because the way it works is recycling companies take different types of plastics and make a granulate out of them which they colour black, because the recycled plastics have different colours. So what we did is that we took products of black plastic – although it is hard to say which are made of recycled plastics and which are new. You would really have to test them yourself to find out. The advice we give to parents is to opt for natural materials – wooden toys, toys made of fabrics, cotton and so on, because the plastics contain different chemicals and some of them may unfortunately be toxic.”

What kind of action would you like to see taken by the EU authorities?

“That is something we are strongly pushing for. I think the EU should once again become a promoter of the most progressive legislation. The EU is doing a really good job in promoting legislation aimed towards EU companies, however they are not being as progressive on the global level and these type of chemicals are persistent, so they do not disintegrate in the environment, they persist there, they accumulate in the food chain, so it is really key to limit them on a global level. And here the EU should once again become the leader and really push for very strict limits for persistent organic chemicals. What we have seen in the last few years is that the EU was happy with all these exemptions for the car industry, the aircraft industry who have been asking for them because they use these brominated flame retardants. But this has to stop because, on the global level, the sooner these chemicals get eliminated and are substituted by safe alternatives the sooner we will come closer to a sustainable economy which is capable of re-using materials and promoting their recycling.”

Is there a campaign underway? How can people who are concerned about this problem get their voice heard?

“We are just initiating a new campaign –called Toxic-Free Recycling – and we are asking people to sign a petition urging EU legislators to stop these exemptions and implement an economy that will not allow toxic chemicals to enter recycling streams.”

That would appear to be a long-term process. How long?

“Of course, it is a long-term process but we were given data which shows that some of these flame retardants which we have been measuring were banned ten, fifteen years ago and we are already passing the peak of these chemicals entering the recycling streams. What we would like to see and what we would like to promote is not only the substitution of safer chemicals, but a strategy that would change the design - we call it the Green design –so instead of having computers in plastic containers to use metal cases where you do not need any flame-retardants. So the way the circular economy should go is to use less and less chemicals and more and more natural materials which may appear more expensive at first in in the longer term are more efficient.”