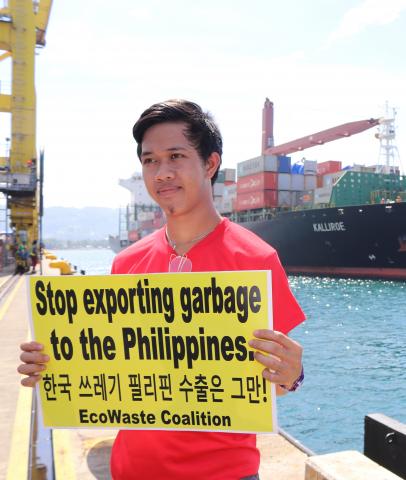 Tagoloan, Misamis Oriental/Quezon City.  The waste and pollution watch group, EcoWaste Coalition, applauded the departure from the Philippines of 51 containers of illegal garbage exports from South Korea extolling the move as a “triumph for environmental justice, morality and the rule of law.”

Speaking at the ceremonial send-off rites held at the Mindanao International Container Terminal (MICT), Aileen Lucero, National Coordinator of the EcoWaste Coalition, underscored that “the waste shipments violated Korean and Philippine customs and environmental laws, as well as the Basel Convention,” and “sending the garbage back to its origin is only just, moral and lawful.”

“Our resolute stance to get the garbage returned to its sender shows how much we, the Filipino people, want our fragile ecosystems to be protected against the adverse effects of waste trafficking, which is a serious threat to our people’s lives, their health and  the environment,” she said.

“By saying ‘no’ to garbage dumping from Korea and other countries, we say ‘no’ to the derogation of our country’s dignity and sovereignty, ‘no’ to the disrespect for national and international laws, and ‘no’ to the harm they will bring to our communities,” Lucero told the crowd assembled.

“As a civil society group dedicated to promoting a zero waste and toxics-free Philippines, we promise to remain vigilant to ensure that our country does not become a dumpsite for any country’s garbage,” she assured them.

MICT Port Collector John Simon echoed Lucero’s stance as he said: “May our victory serve as a lesson to big nations that small nations like the Philippines can rise and fight for its right to have a clean environment free from the hazardous waste of the most powerful and industrialized nations of the world.”

Lucero was quick to point out “the struggle for environmental justice, morality and the rule of law is not yet over” as there are still 5,176.91 tons of bulk waste languishing on a government land in Barangay Santa Cruz, Tagoloan waiting to be sent home.

“For the sake of the Tagoloan people’s health and their environment, we call upon the Korean government to continue its fruitful cooperation with the Philippine government to ensure the rapid re-export of these wastes to Pyeongtaek City!,” she said.

Last December 27 and 28, 2018, the governments of the Philippines and South Korea resolved to have the 6,500 tons of illegal garbage re-exported to the latter.  Philippine authorities have determined the waste shipments as “misdeclared, heterogenous and injurious to public health.”

Not forgetting about the 103 containers of reeking Canadian residual wastes disguised as plastic scraps for recycling, the EcoWaste Coalition stressed that “the repatriation of the South Korean garbage to its source should rouse Canada into resolving the festering garbage dumping controversy.”

It will be recalled that illegal garbage exports from Canada entered the port of Manila in several batches from 2013 to 2014.  In 2015, wastes from 26 of these 103 containers were illegally disposed of at a landfill in Tarlac rubbing salt into the wound.

Canada ’s indecisiveness to take their reeking garbage back violates the rule of law and is immoral, the  EcoWaste Coalition said.  Despite Prime Minister Justin Trudeau’s assurance in 2017 that “it is now theoretically possible to get it back,” the Canadian garbage continues to fester with no end in sight, the group lamented.

The return of the dumped waste to South Korea shows doing the right thing is not just theoretical, the EcoWaste Coalition pointed out, expressing its hope that Canada will finally come into compliance with the Basel Convention.

South Korea’s mixed plastic waste cargoes in 51 containers -- wrongly declared as “plastic synthetic flakes” -- were in violation of DENR DAO 2013-22 as per the investigation report by the Environmental Management Bureau (EMB)– Region 10.  The said regulation, which implements the provisions of Republic Act 6969 (Toxic Substances and Hazardous and Nuclear Wastes Control Act), states that “no importation of heterogenous and unsorted plastic materials shall be allowed.” 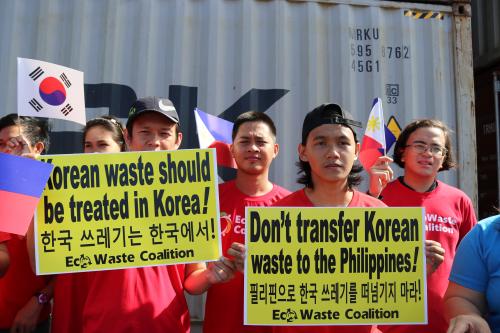 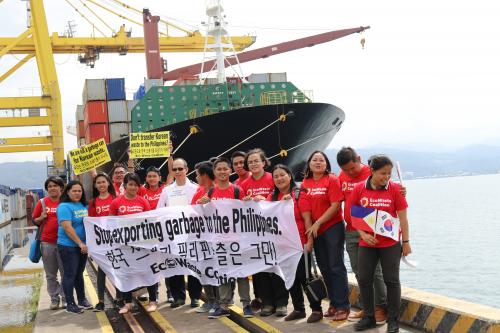