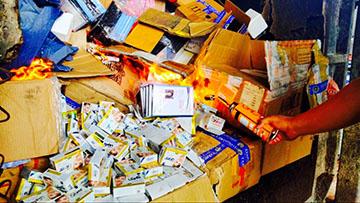 Quezon City, Philippines Non-government organizations have cautioned the customs authorities from burning confiscated skin whitening products tainted with mercury to reduce the harm of mercury pollution to human health and the environment.

Last week, the Bureau of Customs NAIA sent to a pyrolysis disposal facility in Trece Martires City some 1.5 tons of seized imported goods, including 400 kilos of unregistered Goree skin lightening cosmetics that the Food and Drug Administration (FDA) banned in 2017 due to their mercury content.

The incineration of the intercepted mercury-containing cosmetics prompted the EcoWaste Coalition and the International Pollutants Elimination Network (IPEN) to weigh in on the manner the confiscated products were disposed of.

“While commending the BOC for preventing these toxic cosmetics from entering the market, including online stores, we are concerned that the mercury content of these products was released into the atmosphere through the facility’s flue gas,” said Thony Dizon, Chemical Safety Campaigner, EcoWaste Coalition.

“Even if the facility has functional anti-pollution control devices (which may reduce but not eliminate mercury emissions), mercury can still be discharged into the broader environment via the by-product ash,” Dizon said, noting that “mercury in the ash can be released back to the atmosphere by volatilization.” Lee Bell, IPEN Mercury Policy Advisor, stated: "Incineration of mercury contaminated cosmetics in a pyrolysis process must be avoided as it presents a high risk of releasing mercury vapor to the atmosphere. The vapor is toxic and a threat to process workers and the general public. The Minamata Convention guidance on this issue warns that the only way to avoid such emissions is to prevent mercury from entering the waste stream that will be incinerated."

"There are much safer ways to dispose of this hazardous waste such as sending it to a dedicated mercury waste treatment plant which is specifically designed to extract and separate any mercury from the waste and then subject it to stabilisation with sulphur,” he explained, stressing “this dramatically reduces the toxicity, volatility and bioavailability of the mercury and allows it to be stored safely."

Through a letter sent to BOC Commissioner Rey Leonardo Guerrero, the EcoWaste Coalition requested the bureau not to burn confiscated mercury-containing imports, but to keep them in a secure storage facility in the interim as the country still lacks a non-burn mercury waste treatment plant for such mercury-bearing discards.

Such a storage facility must comply with the requirements and conditions under the DENR A.O. 2019-20, or the Revised Chemical Control Order for Mercury and Mercury Compounds, and DENR A.O. 2013-22, or the Revised Procedures and Standards for the Management of Hazardous Wastes. "with provisions for appropriate emergency response in case of chemical incidents and spills.”

Also, all treatment and disposal of mercury-bearing or mercury-contaminated wastes must be approved by the Environmental Management Bureau and should be in conformance with RA 8749, or the Clean Air Act, and other applicable laws and regulations, including the Minamata Convention, which seeks to cut mercury emissions and releases.

According to the EcoWaste Coalition, BOC’s vigilance against the entry of poison cosmetics will go a long way in protecting the health of consumers, particularly women and girls, as well as the health of the ecosystems against mercury contamination.

The seizure of banned Goree cosmetics contributes to the implementation of the country’s "National Action Plan (NAP) for the Phase-Out of Mercury-Added and the Management of the Associated Mercury-Containing Wastes,” the group said.

The NAP was developed with inputs from various stakeholders, including the EcoWaste Coalition, and completed in 2019 through the assistance of the United Nations Industrial Development Organization (UNIDO) and the Government of Switzerland. “We hope the customs authorities will take our recommendation into account as we anticipate a surge in the volume of mercury-containing skin whitening products to be seized and disposed of as the global phase-out for such products takes effect this year,” the EcoWaste Coalition concluded.