The EcoWaste Coalition made the suggestion at a press briefing held today to announce the test results of some items that the group bought and sent to SGS, an international testing company, for phthalate analysis.  Toxicologist Dr. Erle Castillo was on hand to shed light on potential health effects of phthalates to children's health.

The group specifically told consumers to avoid school supplies made of polyvinyl chloride plastic, or those marked “PVC,” “V” or “3”, which may contain elevated concentrations of toxic phthalates (pronounced as THAL-ates).

Phthalates, a class of plasticizers added to PVC to render it soft and flexible, are known to disrupt the body’s hormonal systems.  DEHP, one of the two types of phthalates found in the samples, is classified as a “probable human carcinogen” by the US Environmental Protection Agency (EPA).

Phthalates are absorbed by the human body through ingestion, inhalation and skin absorption.

Out of five samples of seemingly harmless school supplies obtained from retail outlets in Divisoria, Quiapo and Cubao, four were found positive for toxic phthalates DEHP and/or DINP, namely:

According to the  Department of Health Administrative Order 2009-0005-A as amended in 2011, phthalates DEHP, DBP and BBP in concentrations exceeding 0.1%  are banned in the manufacturing of toys.  On the other hand, phthalates DINP, DIDP and DNOP above 0.1% are banned in toys that can be placed in a child’s mouth.

“DEHP and DINP are restricted in children’s toys not only in the Philippines, but also in Europe and the US.  So why are we finding them in very high concentrations in school supplies, which, like toys, are directly handled and used by children?,” asked Thony Dizon, Coordinator of the EcoWaste Coalition’s Project Protect.

Last year, the group reported finding high levels of DEHP and/or DINP in two backpacks, two raingears and one lunch bag, as well as in two kiddie boxing gloves and two swimming toys.

“The unregulated use of PVC-based children’s products is not only a public health issue, but an environmental one as well.  Burning PVC products at the end of their useful lives will generate extremely toxic pollutants known as dioxins,” Dizon warned.

“For the health of our kids and the ecosystems, we ask our parents to buy PVC-free school supplies.  At the same time, we ask the government to extend the ban on toxic phthalates in toys to all children’s products, including childcare articles and school supplies,” he added.

According to a booklet published by the Endocrine Society and IPEN, “phthalate exposure is linked to genital abnormalities in boys, reduced sperm counts, decreased ‘male typical’ play in boys, endometriosis and elements of metabolic disruption, including obesity.”

Information from the US EPA stated, “children have been reported as having the highest exposures to phthalates, and that their exposures are often greater than those in adults…due to increased intakes of food, water and air on a bodyweight basis, as well as children’s unique exposure pathways such as mouthing of objects and ingestion of non-food items.”

To prevent exposures to phthalates via school supplies, the EcoWaste Coalition advised consumers to heed the following “Back-to-School Guide to PVC-Free School Supplies”:

The EcoWaste Coalition also appealed to all manufacturers of school supplies and other children’s products to switch to non-PVC materials and to disclose the chemical ingredients of their products, as well as to provide health and safety instructions and warnings for the guidance of consumers. 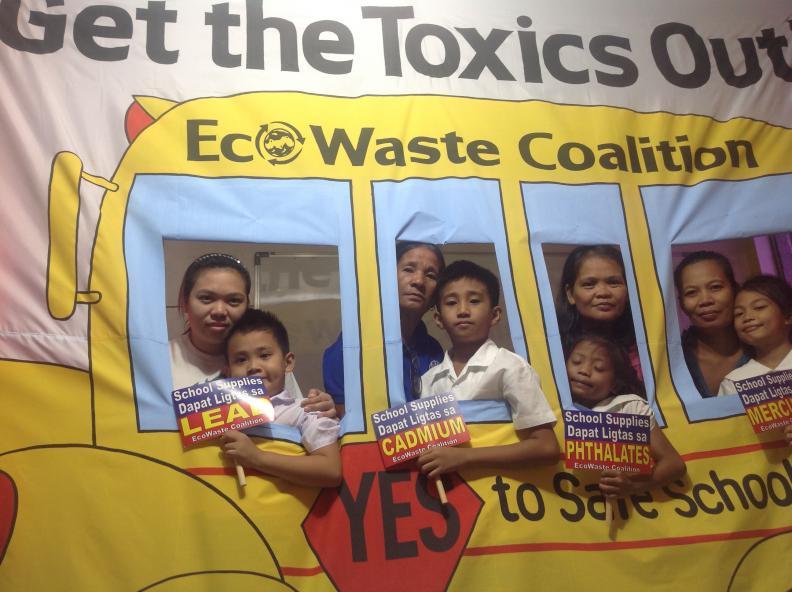