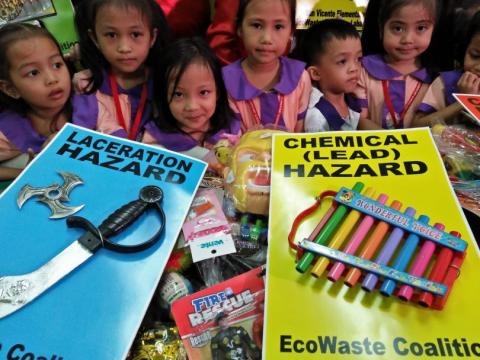 High levels of toxic substances have been found in over 32% of children’s toys tested in a recent analysis of toxic heavy metals and chemicals in toys on the market in the Philippines. None of the samples, including a toy with 198,900 ppm of lead, provided a list of chemicals that make up a toy nor provided text or graphic warnings. The study, released on the Universal Children’s Day on November 20, the day when the UN General Assembly adopted the “Declaration of the Rights of the Child” in 1959 as well as the “Convention on the Rights of the Child” in 1989, underscores the need to expedite the enactment of the proposed Safe and Non-Toxic Children’s Product Act in the Philippines. The Act seeks to regulate the manufacture, importation, distribution and sale of children’s toys, school supplies, childcare articles and other related products containing toxic chemicals beyond the permissible limits. The study was conducted by the EcoWaste Coalition, a public interest NGO in the Philippines, and IPEN, a global network of public interest health and environment NGOs.

The analysis revealed that 32 out of the 100 sampled toys (32%) contained one or more toxic metals such as antimony, arsenic, cadmium, chromium, lead and mercury above levels of concern, of which 22 (22%) screened positive for lead. Of the five samples of plastic toys sent to the laboratory for phthalate, two failed to pass the regulatory limits for phthalates DBP, DEHP and DINP.  A doll had 0.915% DBP and 2.82% DEHP, and a baseball toy had 0.988% DEHP, way in excess of the  0.1 % limit for such phthalates set up by the Department of Health Administrative Order 2009-0005-A of the Philippines. These toxic chemical contaminants are known to damage the nervous system and reproductive system, cause lung and kidney diseases, affect the immune system and reduce intellectual capacity, and have been associated with permanent brain damage and cancer. Young children are likely to put toys in their mouths and thus ingest chemicals during a period of rapid neurological development, making children under 5 especially vulnerable to the impacts of toxic exposures.

“Our study revealed disturbing levels of lead in some toys up to 198,900 ppm despite the explicit ban on the use of lead in the production of toys”, said Manny Calonzo, IPEN lead paint advisor and a Goldman Prize awardee of 2017. “The government needs to ensure compliance to the ban on lead and its compounds in the production of toys and children’s products as contained in the Department of Environment  and Natural Resources Administrative Order 2013-24, or the Chemical Control Order for Lead and Lead Compounds.”

“The country’s toy registration and labelling requirements are not effectively enforced as evidenced by 77% of the samples providing zero information about their manufacturers and/or distributors, 75% not indicating License to Operate (LTO) number on the product label, and 75% failing to meet other required labelling information on the packaging”,- said Thony Dizon, Chemical Safety Campaigner, EcoWaste Coalition. “None of the toy samples containing toxic metals and/or phthalates indicated the presence of such chemicals on the label, and no cautionary statements or graphic warnings were provided to inform or forewarn buyers and users”.

“The lack of labelling undermines the right of consumers to know about product chemical safety,” said Olga Speranskaya, IPEN Senior Advisor. “The findings of the study contributes to the promotion of information disclosure on chemicals in products which is one out of three core objectives of the SAICM Chemicals in Products Program. Disclosing information on chemicals in products will prove the compliance of the Philippines with the recommendations of the Chemicals in Products Program, which was adopted by more than 100 governments, including the government of the Philippines in 2015.”

Special thanks to IPEN's Southeast & East Asia Regional Coordinator Lia Esquillo for important contributions to the development and finalization of the project.