Press Release
Calls for Prime Minister Justin Trudeau to Take Canadian Garbage Home Mount after He Ordered Food for Take-Out in a Restaurant Not Far from where the Rotting Trash Shipments are Stored
(Environmentalists Press PM Trudeau to Take Garbage Out of the Philippines)
13 November 2017, Quezon City.  The unresolved dumping scandal involving the bungled shipment of 103 container vans of residual garbage from Canada that arrived in the Philippines in batches from 2013 to 2014 continues to haunt Prime Minister Justin Trudeau who first visited the country in 2015 for the APEC Summit.

The visiting Canadian leader faces mounting calls to take the rotting garbage home after his much-publicized out of schedule visit to a popular fastfood restaurant that is only few minutes away from the Port of Manila where the illegal trash imports from Canada are stored.

“While we do not have any problem with PM Trudeau stopping by a 100% Filipino-owned restaurant, he should have gone as well to the nearby port to see for himself the reeking Canadian trash shipments and right there and then made the announcement to take the garbage out of the Philippines.  That act would have merited greater media mileage, and endeared him to all Filipinos,” said Aileen Lucero, National Coordinator, EcoWaste Coalition.

“PM Trudeau cannot skip the Canadian garbage issue with another vague statement like what he did in 2015 on the sidelines of the APEC Summit.  Evading the issue again will badly reflect on his capacity and sincerity as a global leader, and will only mean he doesn’t really care about the rotting trash in our port and their adverse impacts to our health, environment and to our dignity as a sovereign nation,” she emphasized.

Dr. Angelina Galang, President, Green Convergence for Safe Food, Healthy Environment and Sustainable Economy, stressed “no country deserves to be a dumping ground for another country’s rubbish.  Canada has no option but to re-import their trash and to guarantee that such unethical act will never occur again.”

“PM Trudeau should uphold the highest good of his office before the international community by complying with his country’s legally bounded treaty commitment disallowing the transboundary shipments of hazardous waste,” said Rene Pineda, President, Consumer Rights for Safe Food.

Sonia Mendoza, Chairman, Mother Earth Foundation, “remains hopeful that PM Trudeau will not leave the Philippines without confirming Canada’s commitment to get back their garbage in line with international law and in the spirit of environmental justice.”
“The botched Canadian trash shipments are in violation of national and international laws that are meant to safeguard our country from the transboundary transfer of hazardous waste and other wastes.  As a respected member of the global community, we hope Canada will finally do the right thing and repossess their garbage for proper disposal in Canada,” stated Atty. Amang Mejia, Counsel of the EcoWaste Coalition and other intervenors in a criminal case filed by the government against the importers of the Canadian garbage.

Twenty-six of the 103 container vans of Canadian garbage were illegally disposed of at a private landfill in Tarlac in June–July 2015, angering local officials and residents and galvanizing citizens’ opposition against foreign waste disposal in the country.

In June 2016, Judge Tita Bughao-Alisuag of the Regional Trial Court of Manila (Branch 1) ordered the return of the 50 shipping containers covered by Criminal Case No. 143-11191, emphasizing that the Philippines is not a “trash bin” and that the dumping incident “should not be made a precedent for other countries to follow.”  The court order has yet to be complied with. 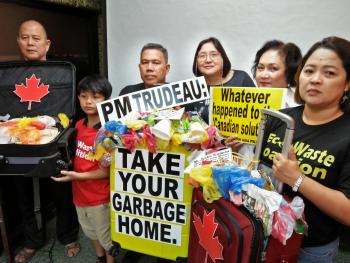