Makati City/Quezon City.  As Filipinos usher in the Duterte government and his promise of change, environmental activists gathered anew outside the Embassy of Canada in Makati City to denounce the long-drawn-out Canadian garbage dumping scandal that has haunted the outgoing Aquino administration.

At a peaceful rally organized by the EcoWaste Coalition and Buklod Tao, the activists called out Prime Minister Justin Trudeau for his government’s failure to re-import the illegal trash shipments that have been rotting in Manila and Subic ports.

“We ask PM Trudeau not to saddle the Duterte government with these overstaying containers of reeking garbage from Canada.  His government must move quickly to repossess these illegal shipments for environmentally-sound disposal in Canada,” said Noli Abinales, President of the  EcoWaste Coalition, a watch group on chemicals and wastes.

“Removing Canada’s garbage from our ports will be viewed as a meaningful gesture of goodwill towards the new government and put this hullabaloo behind us,” he pointed out.

To get their message across loud and clear, the protestors paraded 12 mock garbage-filled shipping containers bearing Canada’s iconic maple leaf and  unveiled a banner that says “PM Trudeau: What ever happened to the ‘Canadian solution’? For the sake of justice, take back garbage now!”

On the fringe of the APEC Summit last year, Trudeau stated that a “Canadian solution” is being developed to address the dumping controversy that had remained unresolved for far too long.

“We reiterate our demand for PM Trudeau to take their trash back as soon as possible so we can conclude this unhappy episode in Canada-Philippines relations and move on,” said Dr. Angelina Galang, President of the Green Convergence.

“I add my voice to the persistent call asking Canada to re-import their garbage and bring this blatant case of environmental injustice to a close under the Duterte presidency.  We’ve waited long enough, it’s time to return those stinking containers to where they came from,” said “running priest” Fr. Robert Reyes, Lead Convenor, CEN.

Lawyer Aaron Pedrosa, one of the convenors of GTC and Secretary General of Sanlakas said: “Canada has to assume full responsibility for its illegal garbage export to the Philippines that contravenes national and international laws.  PM Trudeau must act fast with unflinching resolve to put this matter to rest.”

It will be recalled that some 103 shipping containers of largely residual household garbage declared as scrap plastics for recycling were illegally exported to the Philippines from Canada from 2013-2014.  In 2015, garbage from 26 of these containers was unlawfully disposed of at a landfill in Tarlac, causing an uproar.

A government-led waste characterization study in 2014 confirmed that 63.94% of the garbage shipments were residuals, which can no longer be recycled and should be properly disposed of.

Local authorities, including officials from the provincial governments of Bulacan and Tarlac and the city governments of Navotas and Quezon Cities, have rejected foreign waste disposal in landfill facilities operating within their jurisdictions.

The EcoWaste Coalition, which espouses environmental justice and zero waste, has warned that “the disposal of the Canadian garbage in local landfills, cement kilns and waste-to-energy facilities will be totally wrong and unacceptable,” and will be in violation of Republic Act 9003, the Ecological Solid Waste Management Act and related local regulations.

The group noted that “Canada, a highly developed country, should have no problem dealing with their soiled diapers, spent electronics, plastic junks and other rubbish right in their own backyard,” stressing “there is no justification at all for their refuse to remain in our soil to be buried or burned.”

In the proposed “Agenda on Wastes and Toxics for President Rodrigo Duterte’s First 100 Days in Office” submitted by the EcoWaste Coalition to the Duterte team in Davao City last May 18, the group requested the new government to “order the re-export of Canadian garbage back to its origin and initiate policy reforms to effectively block foreign waste dumping in the country, including ratifying the Basel Ban Amendment.”

Greetings from the Ecological Waste Coalition of the Philippines, Inc. (EcoWaste Coalition), a non-profit watch group on chemicals and wastes and an active campaigner for chemical safety and zero waste.

We write with urgency to call upon your government to re-import the illegal garbage shipments from Canada that were sent to the Philippines in batches between 2013 and 2014 and which continue to rot in our ports.

When you visited our country in November 2015 for the APEC Summit, you stated that a “Canadian solution” is being developed to address this lingering controversy, but, to our disappointment, you made no clear commitment that Canada will take back its garbage as demanded by our people and by our civil society, trade union, church and political leaders.

As nothing seems to be happening, we renew our call for your government to re-import your garbage for environmentally-sound disposal in Canada.  We ask you not to saddle our new government led by President Rodrigo Duterte with overstaying containers of residual trash from your country.  Our country is not and will never be Canada’s dumpsite.

Your government must move quickly to repossess the illegal garbage shipping containers that are languishing in our ports.  Your action to remove these stinking garbage-filled containers from our land will be viewed as a meaningful gesture of goodwill towards the new government and put this hullabaloo behind us.

We therefore appeal to  you, Mr. Prime Minister, to rapidly implement your “Canadian solution” that should and must include the following remedies: 1) the immediate return of the illegal garbage shipments,  2) the payment for all the costs incurred, and 3) the  fixing of legal loopholes that led to the unlawful export of Canada’s trash to the Philippines.

Thank you for pursuing the “Canadian solution” with speed and resolve in the first 100 days of our new government. 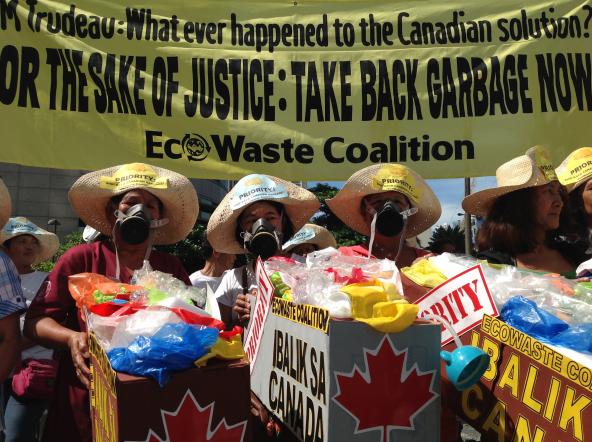 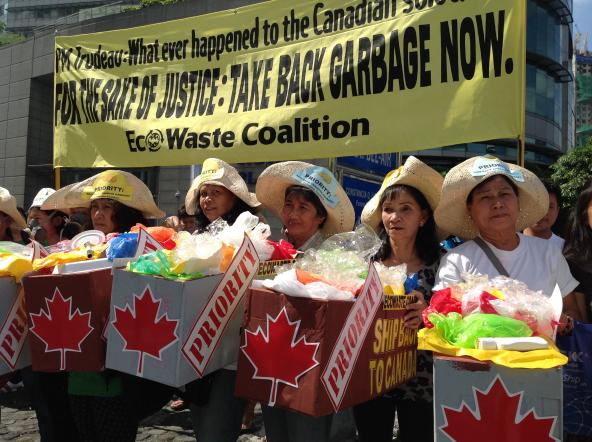