Environmental Experts Will Investigate the Toxic E-waste Dump in Kalasin 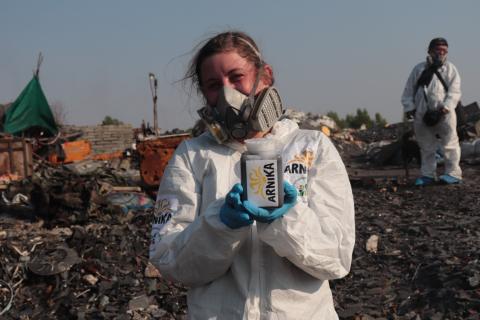 An international team of experts will investigate the industrial hot spots in Khok Sa-ad sub district, Kalasin province. The area is infamous for Thailand’s largest e-waste dump, where scrap from all over the world was formerly collected. The toxic pollution is even enhanced by local dubious dismantling and recycling sites affecting its wider vicinity, including poor local communities. Environmentalists from Arnika [1], EARTH [2], and the local administrative organisation will collect samples for analysis of toxic chemicals in early February.

‘The e-waste recycling treatment here lacks any sort of medical or environmental precautions; the scrap is often burned on an open fire in order to obtain valuable metal parts. This leads to poisoning not only for the workers but also for everyone and everything in the area,’ explains Jindrich Petrlik, Arnika’s expert on toxic substances.

Their team will collect samples of soil, dust, water, and eggs to be analysed in the laboratory. The goal is determining the current levels of contamination with persistent organic pollutants (PBDD/Fs, PCDD/Fs, PBDEs, and dioxins). These chemicals have a serious effect on the human immune and reproductive system. Previous research has already shown serious contamination with heavy metals.

According to the executive director of EARTH, Penchom Saetang, ‘the e-waste workers of Khok Sa-ad may be facing serious health threats, even if some of them do not know it. In the premises we visited, workers wore only basic personal protection equipment – gloves and facecloths. Villagers from within a 2-km radius also complain because of acrid smoke and breathing problems. This research will show whether waste burning and recycling are the cause,’ says the main figure of the environmental protection and justice movement in Thailand.

For years, the e-waste has been supplied from countries around the world as Thailand lacks effective legislation on waste import and management. Experts suggest that the key solution, not only to this case but also others, is the crucially awaited amendment to the Basel Convention [3], which would put an end to such practices and finally protect vulnerable communities across the globe.

[1] Arnika is a Czech NGO focusing on nature conservation, toxics and waste management, and public participation in decision making on environmental issues through cooperation with partners and networks all around the globe. Read more at www.arnika.org/en.

[2] Ecological Alert and Recovery – Thailand (EARTH) is an independent NGO striving for social and environmental sustainability and justice, monitoring the government’s industrialisation policy, industrial pollution, and unsustainable consumption patterns, and focusing on the impacts of hazardous substances on local ecosystems and communities. Read more at www.earththailand.org/en.

[3] The Basel Convention on the Control of Transboundary Movements of Hazardous Wastes and their Disposal is an international treaty adopted in 1989 and the Ban Amendment would completely prohibit the export of any hazardous waste.

Our activities in Thailand have been enabled thanks to the “Increasing Transparency in Industrial Pollution Management through Citizen Science” and “Public participation through citizen science and EIA system enhancement” projects funded by the European Union (EU) and co-funded by the Ministry of Foreign Affairs of the Czech Republic within the Transition Promotion Program. This publication was produced with the financial support of the European Union. Its contents are solely the responsibility of Arnika and EARTH and do not necessarily reflect the views of the European Union.