Environmentalist Calls On Jokowi To Address a Health Emergency

JAKARTA, Indonesia – Mercury contamination is a “public health emergency,” according to a prominent Indonesian environmentalist, and the new government of President Joko Widodo should move quickly to halt trade in the toxic heavy metal.

Yuyun Ismawati, a 2009 winner of the Goldman Environmental Prize for her work on sustainable waste management, called on Mr. Widodo to halt the illegal smuggling of hundreds of tons of mercury into Indonesia, most of which is used in small-scale gold mining operations. 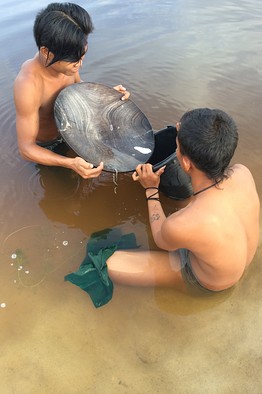 Ms. Ismawati, a co-founder of the environmental group BaliFokus, said doctors have identified more than three dozen suspected cases of advanced mercury poisoning. She estimates that at least 5 million people are exposed to the toxic heavy metal in the air and food in mining communities.

The amount of mercury illegally brought into Indonesia has been rapidly increasing, reaching about 500 tons in 2013, she said in an interview with the Wall Street Journal.

“We have to stop the mercury from coming into the country,” she said. “This is a public health emergency.”

Mr. Widodo, who took office four weeks ago and is still organizing his administration, campaigned on a platform of improving health care and other social services.

BaliFokus is among several environmental groups that have met over the past two weeks with newly appointed Forestry and Environment Minister Siti Nurbaya to talk about environmental priorities.

Much of their discussion has focused on complaints by environmentalists that President Widodo combined forest management and the environment in one ministry, which advocates fear could weaken environmental protection.

Sonia Buftheim, a BaliFokus toxics program officer who attended one session, said she told the minister that the widespread use of mercury in small-scale gold mining was creating a public health emergency. She said Ms. Nurbaya noted her concerns but did not comment on the issue.

An assistant to the minister confirmed that the discussion took place but the minister and her staff did not respond to questions from the Journal about the threat posed by mercury.

Small-scale gold miners use the liquid metal to bind tiny particles of gold and create a small lump of amalgam. Miners and traders then burn off the mercury with a blowtorch, leaving only the gold.

Typically, they use no protective gear to keep from inhaling the mercury vapors.

Most of the airborne mercury settles into the soil and water, where it can be absorbed by fish and rice and enter the human food supply, endangering the health of the entire community.

Mercury poisoning can cause tremors, headaches, muscle weakness and mood swings, among other symptoms. It often goes unrecognized because it can take years to develop and its symptoms are similar to other ailments. It also can cause birth defects.

Ms. Ismawati said an estimated 2 million gold miners operate in 22 of Indonesia’s 34 provinces, including on Java, Sumatra, Sulawesi, Borneo and Lombok. Mercury is sold openly at shops in mining communities, she said.

She urged the government to ban the use of mercury in gold mining and to provide treatment for people suffering from mercury poisoning.