Exploited and Endangered: Female Factory Workers in Vietnam Open Up About Their Work Conditions 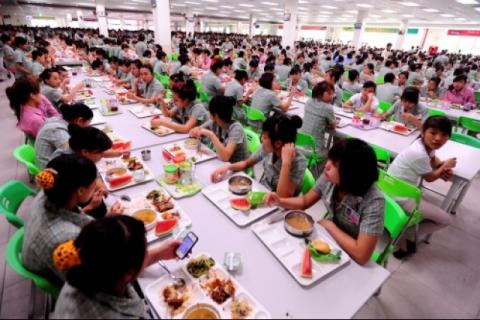 45 women in Vietnam divulged the harsh and inhumane factory conditions they face at Samsung plants in a landmark report conducted by IPEN, a Sweden-based organization dedicated to the elimination of environmental toxins, and the Hanoi-based Research Centre for Gender, Family and Environment in Development (CGFED).

Factory workers spend, on average, 8 to 12 hours a day on their feet, and often rotate between night and day shifts—resulting in persistent joint pain and fatigue. According to women’s testimonies, employees frequently succumb to nose bleeds, dizziness and stomach aches. The women surveyed also reported an alarming prevalence of miscarriages amongst factory employees, and suspect overtaxing may be the culprit—pregnant employees often refuse breaks for fear of remunerative wage deductions.

Samsung has been subjected to increased scrutiny in recent years for suspected dangerous working conditions in its assembly plants. An advocacy group has compiled over 200 counts of terminal illness in former Samsung plant employees—the most common being leukemia, lupus, lymphoma and multiple sclerosis—and a 2016 investigation led by the Associated Press found that South Korean authorities had facilitated the withholding of information about chemical exposureat Samsung chip and display factories, effectively preventing employees from seeking recourse for occupational illness.

Just last month, the South Korean Supreme Court overturned a ruling denying the family of Lee Yoon-Jung, who worked at a Samsung plant for six years and succumbed to a fatally aggressive brain tumor at the age of 32, compensation for occupational disease. Lim Ja-woon, the lawyer representing the Lee family, cited 27 other instances of brain tumors in former Samsung Electronics employees in his litigation, indicating excessive exposure to harmful chemicals as the catalyst for tumor growth. Many other former factory workers and families have filed similar lawsuits demanding occupational disease and bereavement compensations.

Politicians and legislators largely disregard the rights of workers in the electrical industries, and employees are discouraged from discussing working conditions on the pretense of “protecting trade secrets.” According to Joe DiGangi, Ph.D., IPEN’s Senior Science and Technology advisor, “the lives and rights of workers in the electronics industry have been neglected in research and policy.” Women face the consequences of this neglect most profoundly;  80 percent of Samsung’s 100,000 factory employees are women.

In a 2009 UN convention, over 100 international administrations reached an agreement definitively classifying hazardous chemicals in electronics as a global emerging policy issue. The agreement, defined as the Strategic Approach to International Chemicals Management, set a precedent as the first true directive to combat occupational disease in electronic factories, commissioning a team of experts to outline specific measures for addressing the safe handling of hazardous materials in in all facets of production.

According to Pham Thi Minh Hang, a representative of CGFED, the IPEN report denotes a need for “comprehensive regulations […] that ensure worker safety in the electronics industry, including regulations relating to chemicals, electromagnetic fields, radioactivity, shift work and other relevant potential harms. Exposure limit values should be protective of the most vulnerable populations, which include women of child-bearing age, and should provide equal protection in the workplace and the community.” Hang and her fellow contributors are calling for a demonstrable change to factory protocol—including the disclosure of industrial chemical use in plants, and the adoption of more thorough safety guidelines.

Despite Samsung’s fervent dismissal of the claims in the report, Vietnam’s Ministry of Labor and the International Labor Organization in Hanoi are responding to the claims of the women in the survey, launching an investigation into working conditions at both of the electronic giant’s plants.

For DiGangi, the investigation is long overdue. “Companies make a lot of money in Vietnam,” he said, “but their profit rests on the tired shoulders of the female-majority workforce.”