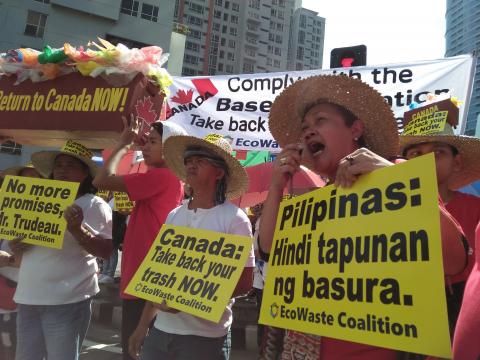 TAKE YOUR GARBAGE BACK: Protesters led by the EcoWaste Coalition gather outside the Canadian Embassy in Makati City to urge Prime Minister Justin Trudeau to respect the ultimatum set by President Rodrigo Duterte for the immediate repatriation of the thousands of tons of garbage illegally shipped to the Philippines from Canada in 2013-2014 in violation of the Basel Convention on the Control of Transboundary Movements of Hazardous Wastes and Their Disposal.

One week after President Rodrigo Duterte issued an ultimatum to the government of Prime Minister Justin Trudeau, citizen protesters led by the EcoWaste Coalition trooped to the Canadian Embassy in Makati City to demand the immediate re-export of Canada’s overstaying wastes in the country to their origin.

Unmindful of the scorching heat of the sun, the protesters wielded a big banner reading “Canada: Comply with the Basel Convention.  Take back your garbage now,” as well as placards stressing "No more promises" and “Philippines is not a dumpsite.”

The protesters brought a faux shipping container bedecked with trash representing the 103 containers of mis-declared garbage exports from Canada that arrived in batches at the Port of Manila from 2013 to 2014.  They also blew whistles to tell Trudeau that “time is up” for Canada’s waste dumping.

“We have patiently waited for years for Prime Minister Trudeau to make good on his promise to resolve this long-running dumping controversy,” said Aileen Lucero, National Coordinator, EcoWaste Coalition.

“When he first came to Manila in 2015, he said a ‘Canadian solution’ is being developed to address the issue, and when he returned in 2017, he said ‘it is now theoretically possible to get (the wastes) back.’  It’s now second quarter of 2019 and the Canadian wastes are still rotting here,” she said.

“We are fed up of failed promises.  Now is the time for Canada to announce when exactly are they taking back their garbage in compliance to its obligations under the Basel Convention.  The wastes have nowhere to go but Canada where the wastes have to be processed and treated in an environmentally responsible way,” she insisted.

In insisting on Canada’s responsibility to repossess their garbage, the EcoWaste Coalition cited a freshly-issued  legal opinion by lawyers at the Victoria BC-based Pacific Centre for Environmental Law and Litigation (CELL) “that Canada has violated the Basel Convention in respect of the transboundary movements of wastes from Canada to the Philippines in 2013 and 2014.”

As the 14th Basel Convention Conference of the Parties will start today, April 29, in Geneva, Switzerland, the EcoWaste Coalition urged the Canadian government to publicly announce the take-back date and plan for its dumped wastes in the Philippines to demonstrate its commitment to the treaty and its treaty obligations.

To prevent future illegal dumping in any country, the group called on both Canada and the Philippines to ratify the Basel Ban Amendment, which aims to protect “developing countries in controlling imports of hazardous and other wastes they were unable to manage in an environmentally sound manner but continued to receive.”

To recall, the EcoWaste Coalition wrote for nth time to Trudeau on January 30, 2019 reminding him that “the dumping of Canadian wastes in the Philippines is immoral and illegal,” and further urging his government to “provide a clear and definite date by which it will repatriate its garbage so that this protracted ordeal can finally be promptly ended. “

On February 11, nine Canadian and international environmental and human rights organizations wrote to Trudeau to back the latest appeal made by the EcoWaste Coalition.  They requested him to ensure the expeditious return to Canada of the wastes illegally exported from Canada, and dumped in the Philippines, as is required by the Basel Convention, and to ratify the Basel Ban Amendment.

On April 15, RightOnCanada, Canadian Environmental Law Association, IPEN, Basel Action Network, and the EcoWaste Coalition asked Trudeau to act on the legal opinion prepared by CELL, stop violating the Basel Convention and take back the wastes.

On April 23, Duterte lambasted Canada for its inaction.  “They better pull that thing out or I will set sail to Canada and dump their garbage there,” he said, threatening “war” against Canada over the unsettled trash dumping.  Presidential Spokesperson Salvador Panelo on April 25, further emphasized that the government's stance against Canada's garbage was "non-negotiable."

To recall, 103 container vans of mixed garbage from Canada, wrongly declared as scrap plastics for recycling, entered the port of Manila in 2013-2014.  The Bureau of Customs intercepted the illegal shipments upon notification by the Department of Environment and Natural Resources (DENR).

According to the DENR, the garbage shipments are in violation of DENR Administrative Order 2013-22, which states that “no importation of heterogenous and unsorted plastic materials shall be allowed” and that “all plastics shall have no traces of toxic materials.”

As per the waste analysis and characterization study conducted by the DENR in 2014, approximately 64 percent of the intercepted Canadian garbage shipments were “baled municipal solid waste or garbage destined for immediate local disposal and cannot be recycled.”

In 2015, wastes from 26 of the 103 containers were illegally disposed of at a private landfill in Tarlac province angering officials and citizens.  The remaining containers are sitting at the ports of Manila and Subic. 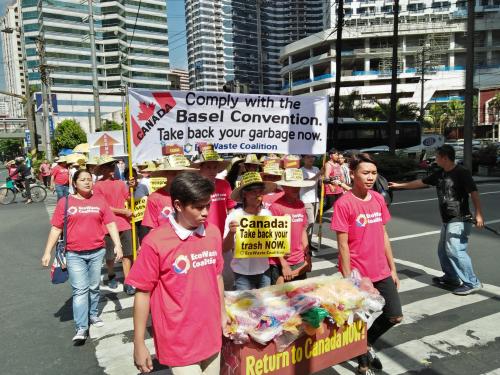 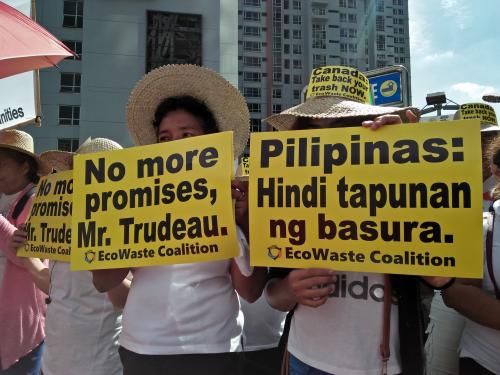 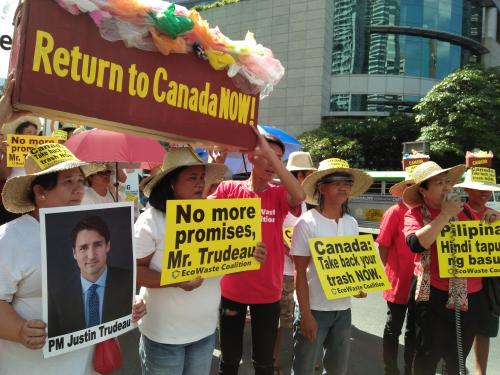 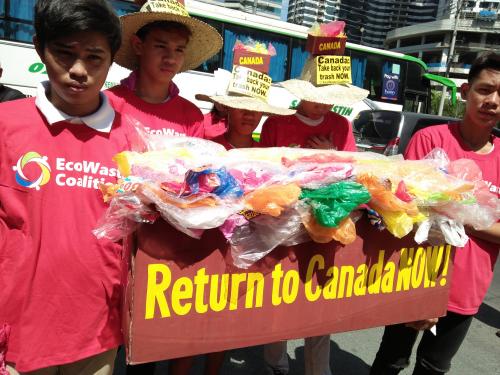