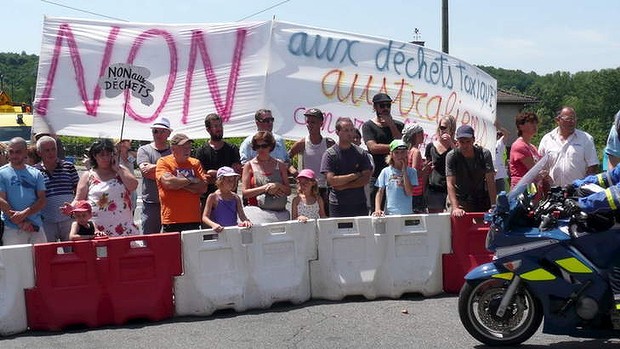 More than 100 tonnes of highly toxic waste will have to remain at Botany after the French government vetoed plans by chemical giant Orica to ship it from Sydney to France for incineration.

Environmentalists across the world have applauded the decision after angry protests during the Tour de France bicycle race and a petition with 23,746 signatures was collected calling for the shipment to be stopped.

French Ecology Minister Segolene Royal said she would not back the plan to send the Hexachlorobenzene (HCB) waste to an area in south-east France because of fears something could go wrong to the ship which could cause marine pollution.

"The transport of dangerous waste ... is an environmental aberration," she was reported as saying.

She also said such waste "should be treated near their source of production".

A spokesman for Orica said the company is currently "reviewing the status of its application" for an initial shipment of 132 tonnes for incineration at the Tredi plant in Salaise.

He said that Orica remains committed to finding a safe and sustainable solution for the destruction of HCB materials that are currently safely stored at its Botany site.

It is Orica's third attempt to ship the HCB, a carcinogenic pollutant banned in Europe since 1981, from Botany to an overseas destination for incineration. Protests stopped its planned export in 2007 to Germany and in 2010 to Denmark. Experts have said that the longer it remains at Botany the more waste is generated because it has to be repackaged every four years to keep it secure.

Objections had also been made to the Australian government from numerous lobby groups including Doctors for the Environment Australia, Friends of the Earth, the Nature Conservation Council, The National Toxics Network, Greenpeace Australia, International POPs Elimination Network, and the Basel Action Network (the Global Alliance for Incineration Alternatives).

Dr Mariann LLoyd-Smith from the National Toxics Network, said they shared Ms Royal's concerns about transporting such a large amount of toxic waste by sea to France and they were also concerned about the repeated engineering failures and toxic emissions of the intended French incinerator.

"Now as a matter of urgency, we need to bring all the parties together and decide on a suitable non-combustion destruction technology not only for Orica's HCB wastes but also to address current and future toxic waste," she said.

"We then need to start the process to allow the Australian community to select an appropriate site where we can deal with our own hazardous waste in an environmentally sound way in line with Australia's international obligations.