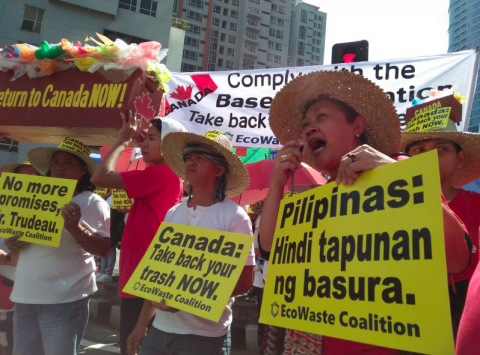 3 May 2019, Quezon City. Environmental health and justice groups have welcomed Canada’s offer to get their garbage in the Philippines re-exported to its origin.

“While we are not aware yet of the terms and conditions, we welcome the offer made by the Canadian government as a very positive development that will hopefully result to the re-export of their garbage on or before the May 15 deadline,” said Aileen Lucero, National Coordinator, EcoWaste Coalition.

“Our nation’s persistence to get the garbage returned to the ‘state of export’ has raised national as well as global awareness about the responsibility of waste exporting countries to respect the rights of people in developing countries and for them to live up to their obligations as parties to the Basel Convention on the control of transboundary movements of hazardous wastes,” she said. The Triple Conference of the Parties to the Basel, Rotterdam and Stockholm Conventions is currently in progress in Geneva, Switzerland from April 29 to May 10.

To recall, Department of Finance Secretary Carlos Dominguez gave the Bureau of Customs until May 15 to return the garbage to Canada following President Rodrigo Duterte’s stern warning last April 23 against the long delayed repatriation of the illegal trash shipments. On April 29, environmental and community activists staged a protest action outside the Canadian Embassy to demand for the immediate re-shipment of the wastes. Prior to these local developments, the Canada-based Pacific Center for Environmental Law and Litigation issued a legal opinion on April 10 strongly arguing that Canada has violated the Basel Convention in respect of the illegal traffic waste from Canada to the Philippines.

“As this is a matter of public interest, we request the authorities to fully disclose the offer made by Canada so the people can see and assess for themselves if the terms and conditions, if any, are in line with our national laws and Canada’s obligations under the Basel Convention. There ought to be a complete inventory and accounting of Canada’s wastes in the country,” Lucero emphasized.

For his part, environmentalist Rene Pineda said: “Prudence and the law dictate that the Canadian government should cover the cost of the repatriation of its waste, including the reimbursement of the expenses of the Philippine government for holding it for many years.”

A GAIA report, Discarded: communities on the frontlines of the global plastic crisis, released two weeks ago documents some of the environmental, health, social and economic impacts on communities in Southeast Asia as they receive more waste from the developing world following China’s decision to cut down on plastic waste imports.

“Communities are resisting the plastic waste dumping in the region. Malaysia, Vietnam, Thailand, Indonesia and India are following in China’s footsteps and have issued bans or restrictions on plastic waste imports. We hope this signals the start of developed countries taking responsibility for their waste throughout the region and recognizing that the right to a good quality of life and healthful ecology does not belong to them solely. It is a right given to all of humanity,” said Beau Baconguis, Regional Plastics Campaigner for the Global Alliance for Incinerator Alternatives.

From 2013 to 2014, a total of 103 shipping containers of mixed household garbage from Canada disguised as scrap plastics for recycling reached the Philippine shores. Twenty six of these 103 containers were illegally disposed of at a landfill in Tarlac in 2015 until exposed and halted by furious citizens and officials.

A waste characterization study conducted by the government in 2014 confirmed that 64% of the garbage shipments were residuals, which can no longer be recycled and should be properly disposed of.

Environmental health and justice activists alongside government officials, lawmakers, labor and church leaders have long insisted on the re-export of the Canadian garbage stressing that the Philippines is not a global dumpsite for the trash of the world.

Canadian news re Canada’s offer to take back garbage dumped in the Philippines: