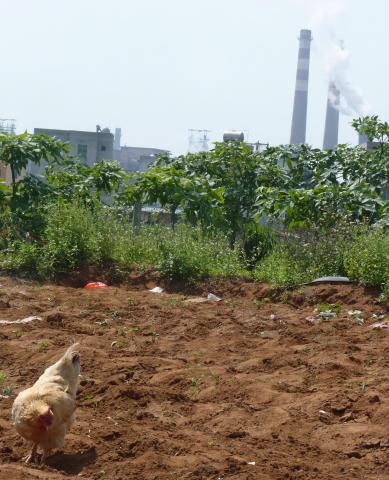 (Beijing, China) High levels of dioxins and similar dangerous pollutants were found in free range chicken eggs samples taken close to waste incinerators and other industrial hot spots in six localities in China, according to a new study released today. Chicken eggs are an important part of the Chinese diet, and the study warned that contamination found in the egg samples represents a serious threat to the public health of populations living in these locations.

Dioxins are dangerous in extremely small concentrations, and they cause neurobehavioral disorders, have a negative impact on the body’s system for regulating hormones (endocrine system), and some are human carcinogens.

IPEN (an international network), Arnika Association (Czech Republic) and Insight Explorer (Beijing, China) conducted the survey of free range chicken eggs in the vicinity of several industrial sites in China, which are potential hot spots for persistent toxic chemicals. High levels of very toxic and very persistent dioxins and PCBs were found in samples taken close to waste incinerators and one metallurgical plant, while low levels were found in egg sample from a supermarket in Beijing.

The presence of a very high level of brominated dioxins in eggs collected near a municipal waste incinerator in Wuhan shows serious contamination most likely caused by inappropriate handling (burning) of e-waste containing high levels of brominated flame retardants.

“Preference should be given to waste minimization and waste recycling in agreement with the Stockholm Convention which China ratified. At the same time, import of e-waste containing high volumes of toxic chemicals to China should be avoided. Recycling of non-toxic waste is a more environmentally friendly approach to waste management than building waste-to-energy plants and incinerators,” says Jindrich Petrlik, co-chair of Dioxin, PCBs and Waste Working Group of IPEN and chairman of Arnika Association.

The data and analyses of free range chicken eggs were obtained from local people and/or sampled by Chinese NGOs Insight Explorer and Green Beagle during field visits in 2013, 2014, and 2015 from six different industrial localities in China and one sample of eggs from a supermarket in Beijing for comparison. These locations were: Beihai, Guangzhou, Wuhan, Qiqihaer, Ziyang, and Shenzhen. Eggs are an important exposure pathway from soil pollution to humans, and eggs from contaminated areas can readily lead to high pollution exposures.

IPEN is a network of organizations working in more than 100 countries to reduce and eliminate harm from toxic chemicals to human health and the environment. For more information see www.ipen.org.

Insight Explorer is a Beijing-based Chinese environmental NGO and was established in 2012. Its goal is to increase public participation in environmental protection in China. Its main activities include environmental education, independent environmental monitoring, assistance to pollution victims, facilitating environmental activists networks and cooperating with international partners in various environmental topics.

Arnika Association is a Czech environmental nonprofit organization. Arnika’s Toxics and Waste Programme aim is to eliminate toxic pollution of the environment and to promote environmentally sound management of waste. Arnika hosts coordination centers of two of IPEN’s working groups, including the Dioxin, PCBs and Waste Working Group. More information Is available at http://english.arnika.org.

The report was part of a project funded by the European Commission, from its EU Aid Fund, co-financed by the Swedish International Development Cooperation Agency through the Swedish Society for Nature Conservation (SSNC). The updated version released today was supported by the Robert Bosch Stiftung through the Stiftung Asienhaus. The full report can be downloaded in English at http://english.arnika.org/e-shop/publications/pops-in-chicken-eggs-from-hotspots-in-china.