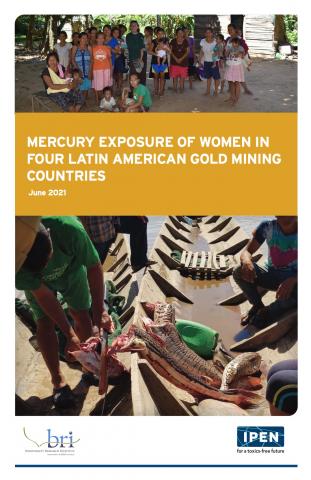 Gothenburg, Sweden Women in three Latin American countries who rely on fish for protein and live in proximity to gold mining activity have been found to have elevated mercury levels in their bodies, according to a new study, Mercury Exposure of Women in Four Latin American Gold Mining Countries. The study was conducted by the International Pollutants Elimination Network (IPEN) together with the Biodiversity Research Institute (BRI) and analyzed mercury levels in women of child-bearing age who are most sensitive to the toxic effects of mercury. Women in gold mining regions in Venezuela, Bolivia, Brazil, and Colombia volunteered to be assessed for the study. A cohort of Colombian women in a region that has switched from mercury-based gold extraction to non-mercury methods were included as a control group for comparison and were shown to have low levels of mercury in their bodies.

Hair samples were taken from women of child-bearing age in small-scale gold mining regions and analyzed for total mercury content, indicating their body burden of the highly toxic metal. Mercury is used by small-scale miners to extract gold particles from low-grade ore, and most of the mercury is lost to the environment where it contaminates fish in the local rivers.

Indigenous Bolivian women in two communities over 300 kilometers apart on the Beni river, exhibited an extremely high body burden of mercury in both communities. Hair samples of women from the Eyiyo Quibo and Portachuelo communities were among the highest levels seen since IPEN began its mercury biomonitoring program in 2011, with an average level of 7.58 ppm. These women subsist almost exclusively on bananas and fish from the Beni River as their main protein source. They have no involvement in mining and gain no benefit from the gold trade.

Of the 163 women who participated in the study, 58.8% exceeded the established United State Environment Protection Agency 1 part per million (1 ppm) threshold level at which negative effects on the development of unborn children begin. Further, 68.8% of the women exceeded the 0.58 ppm level that scientists now believe is the lowest concentration at which subtle, but recognizable, negative impacts on the fetus occur.

The study co-author and IPEN Mercury Policy Advisor Lee Bell said: “The black market in mercury trading is roaring out of control. It is the women in these countries who are paying the price as mercury contamination spreads through the river systems and build up in the fish they rely on for food. Governments must immediately pass laws banning mercury use in gold mining and enforce those laws. Nothing will change until the flow of mercury into these gold mining regions is halted.”

Women in small-scale gold mining regions in Venezuela and Brazil also had elevated levels of mercury in their bodies from the consumption of local, mercury-contaminated fish. In the Venezuelan gold mining town of El Callao, women on average had a mercury level of 1.1 ppm. In the Brazilian mining town of Vila Nova, the women who participated in the study had an average mercury level of 2.98 ppm.

In the Colombian gold mining region of Iquira, where no mercury is used for gold mining and the participants did not eat fish, the average level of mercury body burden was just 0.25 ppm, well below any level of concern.

Mr. Bell added: “Given the large areas contaminated by mercury and the large number of people who rely on river fish for sustenance, it is highly likely that the impact is even greater than this study shows.”

“There are two layers of risk related to the gold mining process,” said David Evers, Ph.D., Executive Director of BRI and co-author on this study. “The obvious is the occupational hazard that mercury poses to the miners and others living close to the work areas. The second is the invisible threat that mercury waste from the mining poses to the environment—an environment that people rely on for their food sources. Mercury travels through air and water and can end up many miles from its original source.” BRI’s role in the study included lab analysis of the hair samples and assisting in the interpretation of the results.

It is estimated that between 14-19 million people are engaged in artisanal and small-scale gold mining worldwide. Most of that mining takes place in remote areas and most miners are impoverished subsistence workers.

Mercury is a potent neurotoxin to humans and can affect the central nervous system of the developing fetus months after the mother’s expo­sure. The harmful effects that can be passed from the mother to the fetus include neurological impairment, IQ loss, and damage to the kidneys and the cardiovascular system. Symptoms of intoxication include tremors, insomnia, memory loss, neuromuscular changes, headaches, and cognitive and motor dysfunction. High levels of mercury exposure can lead to brain damage, mental retardation, blindness, seizures, and the inability to speak.

Biodiversity Research Institute (BRI), headquartered in Portland, Maine, USA, is a nonprofit ecological research group whose mission is to assess emerging threats to wildlife and ecosystems through collaborative research, and to use scientific findings to advance environmental awareness and inform decision makers. For information about BRI’s Center for Mercury Studies, visit: www.briloon.org/hgcenter.