How is China doing with the Minamata Convention on Mercury? 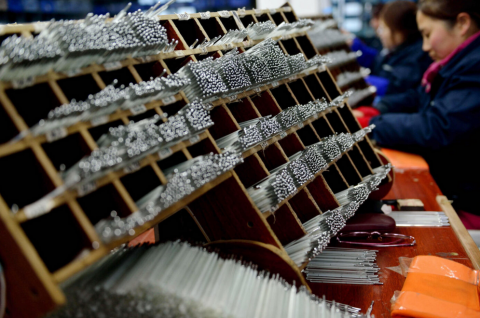 This is a crucial year for hitting targets on the Minamata Convention, and China needs to work faster, reports Wang Chen

Eighty-eight-year-old Chen Deliang took a job at the Wanshan mercury mine when he was 17. For two decades he worked in the smelter, in Tongren, Guizhou province, and after that as an electrician underground. He suffered from mercury poisoning in the smelter – his teeth began falling out in his mid-thirties – and then developed silicosis while in the mine itself.

He can’t recall which year he moved from the refinery to the mine proper: “My memory’s bad. All the smelter workers are the same.” His work-related diseases entitle him to a small income by way of compensation.

The mine went bankrupt in 2001 when the mercury ran out. Since then, remedial work has been undertaken and the area is now marketing itself as a tourist attraction, “Cinnabar Ancient Village”, selling handicrafts made from cinnabar – mercury sulphide ore.

Though mercury is toxic it is used widely in various industries. China is the world’s largest producer, consumer and emitter of the heavy metal, accounting for about half of global use. But neither mercury nor its compounds are a priority for regulation.

In 2017, the Ministry of Ecology and Environment (MEE) published a plan for the relevant industries to implement the Minamata Convention, which aims to manage mercury pollution through measures including a ban on new mercury mines, with 2020 being a key year in which multiple targets are expected to be hit.

China had already signed up to the Basel Convention and the Rotterdam Convention, both of which also govern mercury use. But if is to implement the Minamata Convention, which in 2013 it was one of the first nations to sign, in Kumamoto, Japan, it needs to speed up several aspects of its work.

Mercury had been mined at Wanshan for over 3,000 years. It was once China’s largest producer of the metal, with the largest reserves in Asia. Between the foundation of the People’s Republic of China in 1949 and closure in 2001 it produced around 20,000 tonnes of mercury.

Last September, a mercury-pollution research group formed by various Chinese environmental NGOs visited Wanshan. Tian Jing, a member of the team and a founder of environmental group Nature Fields, recalls the smell clearly. “As soon as you walk into what was the most productive workshop you notice how bad the air is. There’s a pungent odour. And it’s such a complex mix – we took a sample but weren’t sure how to test it.”

The group was worried by what it saw: locals using alkaline water seeping from mine tailings for their everyday needs, piles of refining slag lying uncovered by the road, unidentified waste stored in workshops. The process of treating pollution at Wanshan has been slow and locals have almost become numb to the problem. Tian Jing told China Dialogue that animals are raised and crops planted on the old mine site. Families even bring their children there to pick wild fruit, she said.

The research group published a report on their findings, saying that the Wanshan mine, closed for 17 years, remained an “environmental debt” and needed to be better managed. Handling of such sites was a key point of discussion at the 3rd Conference of the Parties to the Minamata Convention, held in late 2019.

According to the MEE’s implementation plan, China is to have a regularly updated list of mercury pollution sites by 2020, as well as economic policies designed to promote remediation. By 2032, all mercury mining is supposed to be halted. So in the years to come, China will have more and more closed mercury mines to deal with.

A Chinese mercury policy expert who requested anonymity told China Dialogue that sites such as these are currently sealed off, isolated and greened, so pollutants do not flow into rivers and cause more problems downstream. Tian Jing learned from the Wanshan government that a lack of funds has slowed progress and the plan for local fields is to change planting practices and drain paddy fields for use as dry fields. But no measures are being taken to clean up polluted fields and rivers.

Progress has been quicker on the Minamata Convention’s requirement to ban the manufacture and import of seven products that contain mercury. Mercury-containing switches and relays, and pesticides, biotic pesticides and topical antiseptics have been eliminated. China has a five-year exemption period for cosmetics products, but may already be close to compliance: in September and October last year the organisation Toxics-Free China tested samples of cosmetics bought from three large online retailers – JD.com, Taobao and Pinduoduo – and found that none contained excess levels of mercury.

Mercury-containing batteries, fluorescent lights, thermometers, blood pressure gauges and dental amalgam are still being produced and used, though the anonymous expert said that levels are dropping year by year: “For example, some fluorescent lights are mercury-free now.”

Mao Da, academic director for Toxics-Free China, told China Dialogue that mercury-containing medical equipment is the hardest to eliminate. In 2006, China’s environmental authorities started running trials of “mercury-free healthcare” in cooperation with the US Environmental Protection Agency, at Beijing’s Tiantan and Jishuitan hospitals. The trials aimed to replace all medical equipment containing mercury. Jishuitan Hospital replaced almost all of its thermometers and blood pressure gauges with mercury-free equivalents. In 2011, the Qinhuangdao Maternity Hospital in Hebei province replaced mercury-containing equipment and retrained staff, as part of an NGO initiative.

Yet Mao Da also revealed that China’s healthcare sector hasn’t made any significant progress on eliminating mercury. “Mercury-free healthcare is a systemic change, and hugely expensive. Besides replacing, storing and disposing of existing equipment, the replacements need to be more precise, and retraining to use it is another factor.” China has already applied for a 5-year exemption, to allow mercury thermometers and blood pressure gauges to be manufactured up to 2025, citing high costs and imprecise replacement instruments.

The only product without a timetable for replacement is dental amalgam. According to the report from the NGO research group, only 5 out of 18 hospital dental departments or clinics across 7 provinces were still using mercury amalgam in late 2019. Interviews carried out by the group found the majority of dentists would prefer to use alternatives; mercury amalgam has no price advantage, is toxic if inhaled, and is less attractive than alternatives such as synthetic resins. But some patients prefer mercury amalgam as they don’t understand the different options, or don’t want the risk of a filling falling out and needing replacement.

Zheng Shuguo, a professor at Peking University Hospital of Stomatology, said at a workshop on the use of mercury amalgam in China, co-organised by NGO Toxics-Free China, that greater awareness among the public and professionals and the development of new dental materials would make eliminating mercury amalgam straightforward. The research group’s report suggests a target date of 2025.

When discussing products that contain mercury, the anonymous expert said that China has made good progress on researching ultra-low mercury catalysts. Such catalysts may be used in the production of PVC, a plastic widely used for flexible tubing, insulators and inflatable products. The sector accounts for 50% of China’s mercury consumption. Statistics show that at the end of 2018, China’s annual PVC production capacity stood at 240 million tonnes.

Problems arise when the PVC is manufactured using the calcium carbide process, which requires mercuric chloride as a catalyst. There are pollution issues with the production of mercuric chloride, its use in PVC manufacturing, and its recycling. Although China has done a lot of work on low-mercury catalysts, the industry is still struggling to reduce mercury while retaining efficiency. Mao Da told China Dialogue that the industry remains reliant on mercuric chloride.

According to the MEE’s timetable, mercury use per unit of PVC monomer production should have fallen by 50% on 2010 levels by this year, and chloralkali production using mercury or its compounds should be eliminated by 2025. This is ramping up pressure on the PVC industry. One analysis found that government environmental measures are encouraging the withdrawal of equipment used in the calcium carbide PVC manufacturing process – leading to an increase in PVC costs during 2019.

The authorities are starting to produce new plans for the use of lower-mercury catalysts. On 20 January, the MEE’s Foreign Environmental Cooperation Centre opened bidding for funding 10,000-tonne scale trials of low-mercury and mercury-free PVC manufacturing. Those trials should be complete by the end of 2022.

While calcium carbide prices have been going up, ethylene has become cheaper. Ethylene process PVC manufacturing does not need mercury but is more expensive in terms of raw materials and energy use, and so has had limited market share. But analysis has found that that will change, with the calcium carbide process no longer to hold 80% of the market.

Of the 10 industries covered by the Minamata Convention, half release mercury into the environment. Of these, metals smelting, coal-fired power, cement manufacturing and waste incineration are the key sources of mercury emissions in China. These industries all have different mercury emission standards, according to the expert interviewed.

The impact of industry reforms, sparked by tougher environmental policies, on emissions of heavy metals such as mercury are becoming clear. For example, since 2014 coal-fired power plants, the biggest emitters of mercury, have been retrofitted to allow for ultra-low emissions and made subject to China’s toughest-ever emissions standards. Research has found these measures to be effective.

But China is producing increasing amounts of waste, and so mercury emissions from waste incineration are on the rise. In April 2019, the Chinese Academy of Sciences published a report on mercury pollution from incineration of municipal waste, finding mercury levels in incinerator waste gases were commonly higher than UN Environmental Programme recommended levels. The above expert told China Dialogue that those emissions are largely due to products containing mercury mixing in with ordinary waste.

But better waste-sorting won’t solve this problem. Mao Da says that current work on waste-sorting is marginalising the collection and disposal of hazardous waste, so mercury-containing products will continue to end up in incinerators. Even if that improves, removing mercury at the source remains the more fundamental solution.

He also said that a lack of representative data is slowing progress on controlling mercury. “Mercury and its compounds are highly volatile, and so monitoring is harder than for other pollutants.”

The above expert added that technology for mercury monitoring, reducing mercury use and tackling mercury pollution in waste water, gas and solid waste are still being developed.