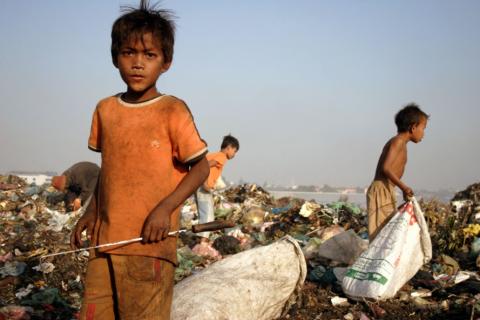 Without consideration of the public and experts from the most affected and vulnerable regions, a global Plastics Treaty cannot meaningfully resolve the crisis.
31 May 2022

by Jane Patton and Tadesse Amera

This op-ed appeared 30 May 2022 in Environmental Health News

In March 2022, 175 countries came together in an agreement to begin negotiations on a global treaty to address the plastic crisis.

This week, governments from across the globe will meet in Dakar, Senegal, to develop the terms of the new Plastics Treaty, setting the stage for what will— and will not—be addressed in the accord.

We are concerned the Plastics Treaty may neglect key facets of the plastic crisis, especially threats to human health, and may fail to include those most affected by the crisis.

Chemicals in plastics threaten health during production, use, transport, and waste management. In each stage, there are toxic emissions that harm people, often those most vulnerable. BPA, flame retardants, phthalates, and hundreds of other chemicals in plastics have been linked to cancer, infertility, brain damage, and other serious health conditions.

The worst effects hit hardest in low-income communities all over the world, regions often saddled with the plastic trash of other countries. No community should be forced to bear undue burdens from toxic plastic wastes shipped to their borders from more privileged places.

Public participation in the plastics treaty

Because of these unjust harms, it is crucial that countries guarantee and promote – including financially—wide, inclusive, and transparent public participation in the treaty negotiation process. The treaty must tackle the problem of plastic pollution at its source, and it must include the expertise of those most harmed by and familiar with those sources.

Countries are the main subjects of international law. Yet one of the most critical decisions from countries to come out of the meeting in Dakar this week will be around the public’s right to participate in the Plastics Treaty development.

The treaty negotiations mandate calls for the “widest and most effective participation possible,” involving representatives from international organizations. Other negotiation processes and agreements – such as the Aarhus Convention and the Escazu Agreement – have set significant progress for defining and modeling public participation and environmental democracy.

Yet the draft rules proposed by the UN Environment Program (UNEP) for non-governmental participants in the Plastics Treaty negotiations would be a step back from these recent precedents, undemocratically limiting the contributions of civil society voices, including experts, workers, and critically affected communities.

Industry and NGO’s lumped together

Alarmingly, UNEP’s proposed rules have lumped together public interest groups and for-profit industries, who typically have opposing interests and understandings of solutions to the plastics crisis. The UNEP plan would force groups from diverse cultures, with unequal access to information and wealth, be represented by one or two spokespersons— leaving most NGOs outside the negotiations, speaking among themselves.

This creates an undemocratic structure. The industry that produces hazardous chemicals in plastic is put on the same footing with public health organizations. This is illogical and curtails rather than enhances participation.

Denying equal access and participation will make for an unambitious and uninformed Plastics Treaty, ripe for industry’s manipulations. Moreover, it represents a regressive precedent for future international negotiations.

In previous negotiations, access by and input from affected groups has profoundly informed the outcome. For example, at the United Nations Environment Assembly meetings this March, participation by Indigenous Peoples and waste pickers resulted in a mandate for negotiation of a Plastics Treaty that recognizes these groups’ importance and outlines specific guidance on how future negotiations should engage with them.

While public participation is essential in any decision-making, the environmental justice concerns around dumping plastic waste underscore the need for a better approach in Dakar and beyond. More than a billion pounds of plastic wastes are shipped annually from the West to mostly low- and middle-income countries in Asia, Africa, and Latin America, resulting in toxic dumps, contaminated food, and polluted air and water. Without consideration of the public and experts from these regions, a Plastics Treaty cannot meaningfully resolve the crisis.

We are concerned with UNEP’s attempt to hamper civil society’s participation in the Plastics Treaty negotiations. Those on the frontlines of plastic pollution’s worst environmental and human rights impacts need to be in the room and at the table, not only online, but as active participants in Dakar and throughout the negotiation process.

Their unique perspectives, expertise, local knowledge, innovations, and insights must be heard and accounted for during this historic treaty for our health and the planet.

Related Items:
Toward a Plastics Treaty