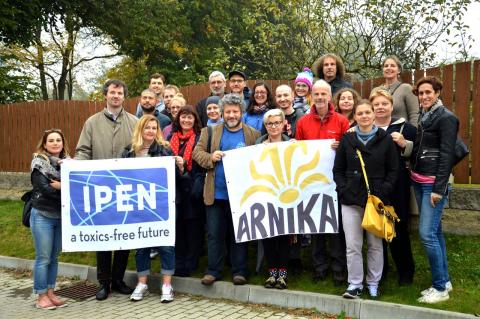 How to deal with toxic pollution: That was the main theme of the IPEN Central and Eastern Europe Regional Meeting that took place in Prague in October, 2017. The three-day conference of regional non-governmental organizations discussed a common future approach for Central and Eastern Europe. The meeting included an excursion to Spolana – a chlorine factory which is the biggest contemporary polluter of the Czech Republic. This trip showed how difficult, though not impossible, it may be to resolve historical environmental burdens.

Right in the historical centre of the Czech capital, environmental activists shared their experience regarding crucial issues of soil, water and air contamination from toxic waste. The conference brought together almost 30 participants representing fifteen European countries. The main goal of the meeting was to enhance the cooperation of environmental NGOs in the region, based on IPEN’s 2020 Global Plan and strategy. Maria Ekström Johansson, IPEN’s Operations and Finance Director, presented this strategy on the first day.

“Hearing other people’s experience in dealing with toxic issues was truly inspirational,” said Jelena Marojević Galić from Green Home (Montenegro) about the meeting. “It is great to finally meet face-to-face and get to know the details of people’s projects,” she exclaimed.

“It was great to see how many things are happening in the region, because sometimes we don’t get to see the hard work of other NGOs, and I hope we will cooperate more closely in the future,” said Gergely Simon from the Hungarian Greenpeace.

Providing an external perspective and experience, experts from outside the region also attended the meeting. Abel Arkenbout from the Dutch NGO Toxico Watch, accompanied by his colleague, Kirsten Bouman, talked about a citizens’ control project over waste incineration emissions. Similarly, Manuel Fernandéz from the German Federation for the Environment and Nature Conservation (BUND) presented the ToxFox application on chemicals in everyday products, and shared his experience working with manufacturers. The current development of brominated dioxins-related issues was introduced by Alan Watson (PIC, Wales, UK).

Because the presentation of environmental issues in simple and understandable ways is not always easy, the meeting agenda included presentations by storytelling experts, who shared their know-how about effectively appealing to the public, politicians and representatives of the chemical industry.

Morning mist slowly uncovers a number of industrial facilities. Grey colour is almost all that can be seen. Just above the entrance of one of the buildings, a black and white, seemingly handwritten sign appears: Spolana. That was a sight the participants of the meeting experienced on the second day of their stay in Czech Republic.

The enormous chemical factory, located close to Neratovice, is about 25 kilometers north of Prague and spreads across more than 640 acres. On the spot, a “ghost town” is what pops into one’s head. Only about half of the facilities and buildings are used and in operation nowadays, providing a working place for no more than 700 employees.

During the time of communist Czechoslovakia, Spolana used to be one of the three exclusive suppliers of chemical substances for state agriculture and forestry industries. In the 1960s, the factory produced Trioxone (2,4,5-Trichlorophenoxyacetic acid), which was later used as an ingredient in the devastating chemical Agent Orange during the Vietnam War.

The pollution from the chemical production of the factory received wider attention after floods in 2002. Dioxin and mercury contamination, which had exceeded the limits by a hundred times, required remediation, in order to decrease harm to the environment, human health of workers, and inhabitants of the region. Clean-up of the abandoned and contaminated facilities was different for each of the dilapidated buildings – two that had been used to produce pesticides, and one that was used for amalgam electrolysis were merely torn down and covered with concrete. This was very similar to what was done in Chernobyl and turns the area into a kind of sarcophagus. Yet the groundwater may be still contaminated by hazardous chemicals, even though it is isolated by an underground insulation wall. Another three old abandoned buildings were properly remediated by using the chemical destruction of persistent organic chemicals such as dioxins or hexachlorobenzene. Base Catalyzed Decompisition (BCD) technology was used for their clean up. Cleaned soil was used to fill in the holes after remediation. All remediated sites are still monitored.

Currently, Spolana is a part of a Polish PKN Orlen Group, and has been pushed towards significant changes in the production of chlorine. So far, the factory has been using hazardous mercury cell electrolysis, which will continue only until the end of November 2017, due to the regulations of the Minamata Convention. The factory will then switch to a different way of PVC production by importing ethylenedichloride (EDC) and use the technology of membrane electrolysis in the chlor-alkali plant. The conversion is expected to be finished by December, 2021. The excursion to Spolana was highly appreciated by the regional meeting participants.

Participants’ comments on the IPEN CEE Regional Meeting in Prague, 2017:

Eugeniy Lobanov (Centre for Environmental Solutions, Belarus): “It was very interesting to listen to various presentations from various countries. When it comes to chemical safety, the situation is quite similar, even though we all live in different political and economic conditions. Also, such scientifically deep presentations regarding, for example, brominated dioxins, are very much needed in our campaigns. When it comes to Belarus, they are kind of a new topic – we lack basic research or even a discussion regarding this sort of pollution. Though there are no chlorine production plants such as Spolana, we have to deal with other similar huge enterprises built back in the days of the USSR. But the open-minded approach of Spolana’s management is quite impressive and inspiring."

Jelena Marojević Galić (Green Home Montenegro): "Hearing other people’s experience in dealing with toxic issues was truly inspirational. It is great to finally meet face-to-face and get to know the details of their projects. The best part of this meeting for me, personally, was visiting the Spolana factory, because in Montenegro, we deal with similar old facilities which are no longer in operation. Also, there is a governmental project for the remediation of contaminated hotspots, and the Czech solution may be an example for us in that way. Any kind of inspiration we can get is helpful."

Gergely Simon (Greenpeace, Hungary): "Seeing Spolana was really amazing and interesting because there are currently chlor-alkali plants both in Slovakia and Hungary so that was an important field trip for us. Also, it was great to see how many things are happening in the region, because sometimes we don’t get to see the hard work of other NGOs and I hope we will cooperate more closely in the future." 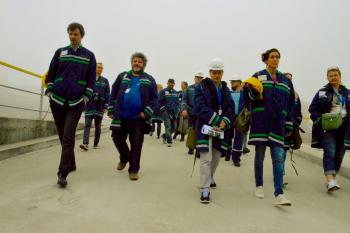 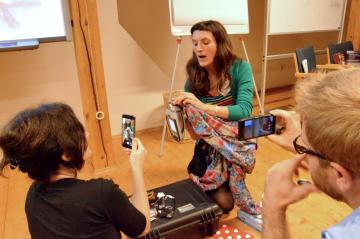