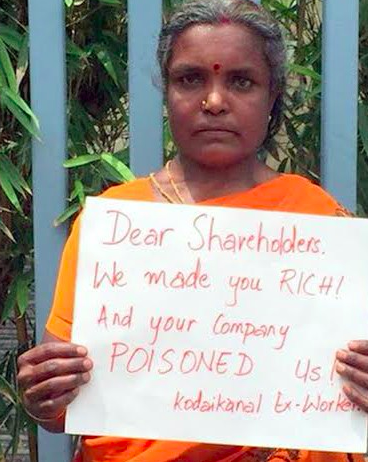 Later this month the Chief Executive Officer (CEO) of the multinational company Unilever will be honored by the United Nations Environment Programme (UNEP) as a Champion of the Earth.

Sadly, many communities and children have been affected by mercury pollution from a former thermometer factory run by Hindustan Unilever Ltd. in Kodaikanal, India. The Unilever corporation has rejected requests from the community to clean the mercury waste that is still contaminating the area, despite the factory having been closed since 2001.

The mercury poisoning in Kodaikanal is one of the most well chronicled cases of toxic pollution anywhere in the world. IPEN stands with the additional 45 signatories in a letter to the CEO reminding him of the responsibility that comes with the Champion of the Earth award and requesting his personal intervention to ensure that an honourable settlement is offered to former factory workers, and that the contaminated environment is cleaned up to international standards that are protective of the sensitive ecosystems that surround the factory site.

See more details in the letter below and read a press release here.

We, the undersigned, are winners of international environmental and human rights awards. We extend our greetings and good wishes to you on your nomination for UNEP's Champion of the Earth Award.

We are aware of your vocal advocacy on the issues of climate change, sustainable development goals and fair treatment of communities, workers and the environment. The UNEP award too is a recognition of your words and actions.

We are sure, though, that you are aware of how the professed commitments of Unilever to justice and environmental sustainability are contrasted by your subsidiary's handling of the mercury legacy issue in Kodaikanal, India.

In 2001, environmental regulators in Tamil Nadu, India, shut down a polluting mercury thermometer factory in Kodaikanal operated by Hindustan Lever, a Unilever subsidiary, now renamed Hindustan Unilever Ltd (HUL). Between 1992 and 1999, the company admits to having sold 43.6 tonnes of mercury-laced broken thermometers containing more than half a tonne of mercury to a number of buyers including informal scrap merchants. It also admits to having discharged more than 2 tonnes of mercury into Kodaikanal's environment.

Workers in the factory say they were kept in the dark about mercury's ill-effects. They allege that the company thwarted all attempts to have independent and comprehensive medical examination done to verify their concerns about ill-health due to mercury exposure. A 2011 Government of India report that investigated worker claims concluded that workers had been exposed to mercury and many showed effects of mercury poisoning.

Till date, the management at Hindustan Unilever has failed to show serious intent to resolve the issues in Kodaikanal. Workers remain uncompensated, children and communities are suffering and the environment polluted. Minamata tragedy is being repeated in Kodaikanal.

We hear a lot about your passion for saving forests, and of your appreciation of the ecological services provided by forests. The Kodaikanal factory is located within and surrounded by valuable and endangered tropical sub-montane evergreen forests. These forests serve as watersheds for millions of people downstream and in Kodaikanal.

Your subsidiary is insisting on a clean-up that will leave more than a third of the mercury in the soil even after the remediation is completed. This mercury will leak out of the factory site into the air, the lakes and the waterbodies that lie around the factory site in Kodaikanal. The clean-up standard proposed for Kodaikanal, India, is 250 times weaker than the levels protective of sensitive ecosystems. This would not be allowed in the UK or any other Northern nation.

We are aware of your commitment to fairness and equal treatment of all people regardless of nationality or race. But Hindustan Unilever's proposal is a clear case of environmental double standards.

At a time when the United Nations is trying to build global confidence to tackle the Minamata Convention on reduction and elimination on sources of mercury emissions, the actions of your company come under added scrutiny.

We are very hopeful that you will bring your Indian subsidiary in line with the values you profess. We are sure that you are aware of the onerous responsibility that such an award brings with it. We urge you to personally intervene to ensure that an honourable settlement is offered to workers, and that the contaminated environment is cleaned up to international standards that are protective of the sensitive ecosystems that surround the factory site.