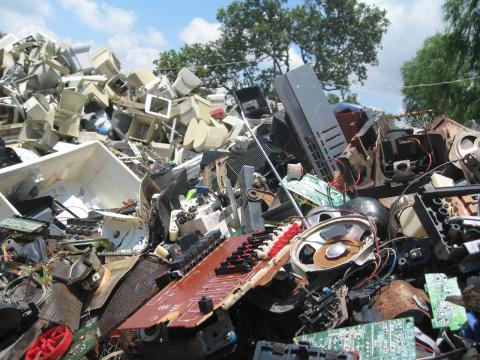 NGOs today delivered a formal challenge to the electronics industry to take action to stop the harm to workers and communities caused by hazardous chemicals used to manufacture electronic products. The Challenge, endorsed by over 200 labor, environmental, public health and community organizations in 40 countries, was presented by a representative from Good Electronics to a meeting in Brussels of the Electronics Industry Citizenship Coalition (EICC), a trade association created to help the industry address environmental, human rights and “social” problems in its supply chain.

The EICC’s “Code of Conduct” that addresses environmental, labor, and health and safety issues, is pretty weak.  But its biggest problem is that the EICC system relies upon occasional audits to enforce conformance to this code of conduct.  There is plenty of evidence, including a 2014 ICAR report called “Turning A Blind Eye,”  that this kind of occasional audit system simply doesn’t work when it comes to the kinds of supply chain issues occurring in the global economy that places manufacturing in developing countries with low wages, weak laws, weak enforcement, and high incentives for corruption.  Business for Social Responsibility came to the same conclusion back in 2007 in its Beyond Monitoring report. In fact, at a January 2015 meeting between EICC and membership groups from both ICRT, and Good Electronics, industry representatives stated that problems of cancer and deaths from hazardous chemicals doesn’t even show up as a problem in its audits.  Clearly, there is a major disconnect between what’s really happening, and what the occasional audit program can see.

The problem of chemical harm from electronics manufacturing is not new to this industry that uses many highly powerful solvents, acids, and other highly toxic chemicals. After the supposedly “clean” semiconductor industry came to Silicon Valley, hundreds of cases have emerged of workplace exposure causing harm to workers and their children and to nearby residents who were exposed to contaminated drinking water polluted by chemicals from electronics factories.

But these problems continue today, now spread to the various countries where the electronics industry now manufactures its products. Civil society organizations report hundreds of cases of electronics production workers who have fallen ill over the past five years in China, South Korea, Indonesia, Philippines, Thailand and elsewhere, from exposure to benzene and other highly toxic chemicals used in manufacturing.

Supporters for Health and Rights of People in the Semiconductor Industry (SHARPS), a worker rights group in South Korea, has documented a total of 193 workers who developed cancers or other illnesses at various Samsung plants in Korea, 73 of whom died. Victims and families of workers who died have been challenging Samsung in court to compensate them for the illnesses and deaths. Last year, Samsung finally issued an apology to the families, and agreed to provide some compensation, but fell short of admitting any responsibility for the illnesses.

SHARPS has also identified another 50 victims at other (non-Samsung) semiconductor plants in Korea, 19 of whom have died.

Workers at RCA plant in Taiwan

Workers at the now-closed plant of RCA in Taoyuan County, Taiwan, say that toxic chemicals caused nearly 1000 cancer cases, and 157 deaths. Following a long legal battle in a lawsuit filed by former workers, a Taipei court is expected to issue a ruling in this case in April 2015.

In June, Dutch research center SOMO will publish a report together with Labour Action China (LAC) on benzene poisoning in the electronics industry in China.

The Challenge was developed by members of two global NGO networks: Good Electronics and the International Campaign for Responsible Technology (ICRT), to which the Electronics TakeBack Coalition belongs. The document challenges the industry to take action in six key areas:

Be transparent. Provide full materials disclosure to workers, communities, and the general public, including what chemicals are being used and discharged, and what hazards to the environment and humans (including reproductive hazards) are known to be associated with the chemicals.

Use safer chemicals. Assess hazardous materials used in manufacturing throughout the product lifecycle and replace them with safer alternatives. Where the environmental or human health effects of a substance are unknown, its use shall be avoided; where it is inadequately or incompletely characterized, the precautionary principle shall apply until all relevant hazard testing is available.

Protect Workers. Develop and implement, jointly with affected and other interested workers and their organizations, comprehensive hazard monitoring for all workplaces and workers throughout the product lifecycle. This includes training, capacity building, and industrial monitoring as well as monitoring to measure exposures and health surveillance to identify and prevent diseases. Workers shall be able to negotiate over hazardous working conditions and refuse hazardous work without fear of retaliation.

Guarantee participation. Respect efforts of workers and communities to participate in the sound management of chemicals and wastes in their workplaces and communities. This includes the development of effective worker health and safety committees and training programs.

Compensate and remediate for harm to people and environment. Develop and fund mechanisms that ensure that workers (present and former, and their families) or communities harmed by exposure to hazardous chemicals receive emergency relief and just compensation. Develop funding mechanisms to ensure environmental and workplace remediation for as long as is needed to address the harm.

Read the full text of the challenge here.