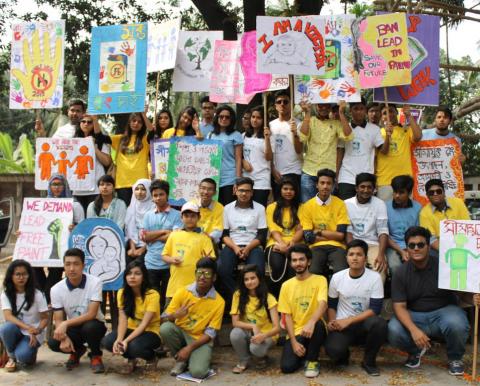 IPEN participating organizations in 36 countries are taking part in the 8th edition of the International Lead Poisoning Prevention Week on October 25 to 31. This year’s campaign focuses on the need to hasten progress toward the global goal of phasing out lead paint through regulatory and legal measures. The Week of Action is spearheaded by the Global Alliance to Eliminate Lead Paint, which is jointly led by the United Nations Environment Programme (UNEP) and the World Health Organization (WHO) and which counts on IPEN and many of its POs from developing countries among its partners. What follows is a brief summary of our POs’ planned activities for the week-long campaign to raise awareness about the hazards and risks of lead, especially on the health of children and other vulnerable groups, and to mobilize stakeholders’ support for the enactment of strong lead paint laws and their effective enforcement.

GAMBIA: The Young Volunteers for the Environment (YVE) will organize a media campaign to promote lead poisoning prevention action under the theme "Ban Lead Paint." Through the planned radio and TV talk shows, YVE intends to engage key stakeholders and strengthen the political commitment, especially of government officials, to address lead paint issues.

KENYA: The Centre for Environment Justice and Development (CEJAD) will disseminate information about the health impacts of lead exposure and promote the implementation of the lead paint standards in Kenya and East Africa through outdoor banners and the social media.

NIGERIA: The Sustainable Research and Action for Environmental Development (SRADev Nigeria) plans to launch the GEF SAICM Project with government, industry, and civil society stakeholders. The group will also continue to reach out to small and medium-size enterprises (SMEs) participating in the project and help them in getting technical support in assessing alternatives to lead-based pigments for reformulation.

TANZANIA: The Agenda for Environment and Responsible Development (AGENDA) will organize a meeting with key stakeholders (government, academicians, industry, NGOs, including consumer association) to raise stakeholders’ awareness about the lead paint standard adopted in 2017 and to promote its enforcement so that human health and the environment will be protected.

ZAMBIA: The Children’s Environmental Health Foundation (CEHF ) will launch the “Safe Paint Zambia” campaign to be led by the country’s president in conjunction with the national independence day celebration. This initiative will provide opportunities to inform and engage high level decision makers on the need to enact a lead paint law in Zambia.

BENIN: The Action Group for the Promotion and Protection of Flora and Fauna (GAPROFFA) will hold a meeting to sensitize stakeholders about the urgency of adopting a binding regulation against lead in paints in Benin.

CAMEROON: The Jeunes Volontaires pour l’Environnement (JVE) will conduct consumer awareness raising activities about the health and environmental effects of lead exposure, as well the country’s lead paint regulation that took effect in 2018, utilizing the radio and the social media.

COTE D’IVOIRE: The Jeunes Volontaires pour l'Environnement (JVE) will hold an information workshop on strategic actions to speed up the process leading to the adoption and signing of a lead paint regulation in Côte d'Ivoire.

GUINEE: The Carbone Guinee will share information about the presence of lead in paints sold in the country and to encourage stakeholders, particularly those from the government, to understand the problem and support the adoption of a national lead paint regulation as soon as possible.

BAHRAIN: Friends of the Environment will run an awareness raising day about the hazards of lead in paint for the information of participating children. It will take place on October 22 ahead of the week of action.

IRAQ: The Al-Rafidain Center for Health Development with Together to Protect Human and Environment Association will organize an online symposium targeting participants from the government, industry, civil society and the general public to discuss lead and its health effects, the lead content of paints produced and consumed in Iraq and the progress in updating the country’s lead paint standard and regulation.

JORDAN: The Land and Human to Advocate Progress (LHAP) will raise public awareness on lead paint issues and concerns through the social media and conduct lobby work, including a stakeholders’ meeting via Zoom to discuss progress in adopting a lead paint regulation in the country.

LEBANON: The Human Environmental Association for Development (HEAD ) will raise awareness on the problems with lead paint and the need to adopt a lead paint regulation through a virtual meeting with the Youth of Red Cross in Byblos and through the new and traditional media.

MOROCCO: The Moroccan Association of Environmental Health and Toxicovigilance (AMSETOX) will inform the Ministry of Education about the need to use lead-free paints in schools for better children’s health, and encourage the Ministry of Health to establish a strategy to fight against lead poisoning.

TUNISIA: The Association d'Education Environnementale pour les Futures Générations (AEEFG) will organize an “open day for information” with all relevant stakeholders to gather further feedback about the lead in paint legislation and to discuss its implementation.

Latin America and the Caribbean

COLOMBIA: The Asociación Colnodo will hold an event to discuss the promotion of a new law recently adopted by Congress regulating the use of lead in Colombia. It will further publicize the said law through the website of the Sustainable Development Network.

JAMAICA: The Caribbean Poison Information Network (CARPIN) will organize two webinars around the theme “Preventing Lead in Paint Exposure: Applicable Interventions.” The webinars will discuss the implications on children’s health of lead exposure, and the milestones to preventing lead in paint exposure to the local population.

MEXICO: Casa Cem will hold webinars to discuss the proposed “guideline for repainting lead-containing playground equipment." The guideline seeks to provide the Mexican local authorities with all the technical specifications for the safe repainting of lead-coated play equipment.

MEXICO: CILAS will produce an animated short film about the historic use of lead enamels in Mexican pottery with artisans, doctors, health authorities and the civil society as target audience. The video intends to create awareness and support for banning lead and for lead- free pottery to eliminate health hazards among artisans, their families and communities and their food, as well as their users at all levels.

INDONESIA: Gita Pertiwi, as part of its “Smart Food City” and building on its ongoing “Healthy School Canteen” initiative, will organize activities in Surakarta City to educate teachers, school committees, canteen managers and other parties on the principles of using environment-friendly materials, including lead-free paints, which should contribute to the promotion of schools as a “lead paint free zone.”

INDONESIA: The Nexus3 Foundation will organize an online campaign, press conference and webinar around the theme of “Lead Safe Paints to Protect Our Children - Strict Regulation and Responsible Business to Protect 32 Million Indonesian Children.”

MALAYSIA: The Consumers’ Association of Penang (CAP) will generate data on lead concentrations in spray paints, raise public awareness about the findings, and advocate for the necessary standard and regulation for lead in paints.

PHILIPPINES: The Interfacing Development Interventions for Sustainability (IDIS) through its “Forging Ahead for a Lead-Safe Davao City” project will push for the implementation of the Davao City Lead-Safe Ordinance by lobbying for the formulation of its Implementing Rules and Regulations among target policy makers and implementers.

VIETNAM: The Research Centre for Gender, Family and Environment in Development (CGFED) will produce a series of mass media and social media products to promote awareness about the newly-drafted Vietnam regulation on lead paint among the people and paint producers.

BANGLADESH: The Environment and Social Development Organization (ESDO) will organize a human chain in front of the National Press Club in cooperation with the Bangladesh Girl Guides Association, and hold a round table stakeholders’ meeting to push for the elimination of lead in all paints.

INDIA: The Arulagam will organize activities to push for the effective implementation of India’s lead paint regulation by the Pollution Control Board in the state of Tamil Nadu, and to raise awareness on lead poisoning and prevention of the target audience at Coimbatore and Nilgiri districts.

INDIA: The Toxics Link (TL) will conduct a webinar about lead in paint and lead poisoning prevention that will draw participants from the government, industry, civil society and the media. TL will also prepare a report on lead in paint compliance issues in India, as well as conduct a poster competition for school children and a social media campaign to raise awareness about the issue.

NEPAL: The Center for Public Health and Environmental Development (CEPHED) will organize a series of awareness raising, capacity building and advocacy activities under the theme “Prevention of Lead Exposure through Effective implementation of Lead Paint Standard in Nepal.” The activities will be supported by the WHO Country Office for Nepal and will be held in coordination with the National Health Education, Information and Communication Center, Ministry of Health and Population, Government of Nepal.

SRI LANKA: The Centre for Environment Justice (CEJ) will organize a social media campaign to gather people’s attention on lead poisoning and prevention, as well as hold a round-table involving government, industry and civil society representatives to discuss about the implementation of lead-related regulations, including lead-safe products in the market.

ARMENIA: The Armenian Women for Health and Healthy Environment (AWHHE) will use its remote communication strategy to raise awareness of community decision-makers and caretakers of school children, including their parents and teachers, about the health hazards of lead in paint, and available alternatives.

AZERBAIJAN: The Ecological Society “Ruzgar” will raise awareness among stakeholders about the harmful effects of lead in paints on the health of the population, and organize a consultation meeting to develop a proposal for the adoption of a legislative act on lead in paints.

GEORGIA: The NGO “Gamarjoba” will launch a public information campaign entitled “Take Over Lead in Georgia” to speed up the approval of the national regulation on lead paint by initiating a public discussion, comments and recommendations.

KAZAKHSTAN: The Association “Greenwomen” will organize an information campaign to promote the adoption of lead paint legislation in Kazakhstan and the Eurasian Economic Union, and to enhance the role of the public in decision-making on the elimination of lead in paint.

MOLDOVA: The NGO “EcoContact” as part of the project “Family Home Without Lead” will provide information on lead exposure during the renovation activities of old houses and apartment units decorated with paints containing high concentrations of lead content during the Soviet era.

RUSSIA: The Eco-Accord will organize a webinar on “Lead in Paint Elimination: For People’s Health and Sustainable Development” to bring together key Russian stakeholders, to discuss, among other things, the importance of eradicating lead in paint and the current status of the Eurasian Economic Union (EAEU) Technical Regulation on Paint Material Safety and the perspectives of Russia and other EAEU member countries.

TAJIKISTAN: The Foundation for Support of Civil Initiatives (FSCI, Dastgiri Center) will organize various policy and information activities as part of its “International Lead Paint Damage Reduction Week” in Tajikistan.

UKRAINE: The Chemical Safety Agency (CSA) will raise public awareness on the effects of lead exposure on children’s health, and provide inputs for the working group in charge of developing the Technical Regulation Establishing Lead Content Limits in Paints.

ALBANIA: The Eden Center will organize a digital awareness campaign to draw public attention to the issue of lead paint, and to encourage the health sector and other national authorities to align with the European legislation with respect to lead in paint.