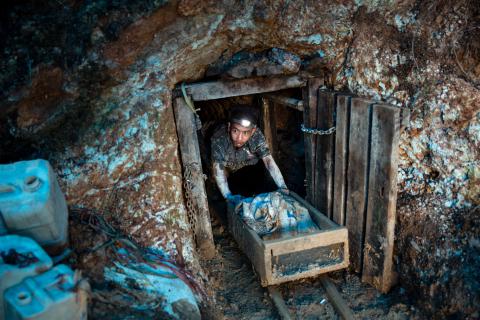 (Photo by Kemal Jufri for the NY Times)

CISITU, Indonesia — In the remote mountains of West Java, workers like 15-year-old David Mario Chandra are an integral part of Indonesia’s gold industry.

A workshop next to his family’s house in Cisitu, in Banten Province, contains machinery that turns gold ore into usable nuggets. The procedure seems simple enough: The crushed ore is tumbled with other ingredients in cylinders called balls until the valuable stuff is amalgamated. But there is a crucial material — and a final step — that alarms environmental and health experts around the world.

“We put 15 kilograms of gold ore and water into each ball, and we use 100 grams of mercury per ball,” or 3.5 ounces for 33 pounds of ore, said David, who runs the family’s workshop. Workers then purify the nuggets using an open flame, burning off the mercury in sites among residential areas throughout the village.

Yuyun Ismawati, an environmental campaigner based in Britain, says the scope of the problem is evident in the amount of mercury being exported from around the world to Indonesia, her home country. Most of it, she says, is brought in illegally.

According to the Indonesian Ministry of Trade, the country imported slightly less than one metric ton of mercury in 2012 through two local companies, primarily for commercial manufacturing, including the production of light bulbs and batteries, and for use in hospital equipment. According to United Nations trade statistics, however, 368 metric tons of mercury, about 810,000 pounds, were legally exported to Indonesia in 2012 from countries that included Singapore, the United States, Japan and Thailand.

The yawning gap between what Indonesia officially reported as receiving and what was actually exported to it is not an anomaly. In 2011, the country officially imported 7.8 metric tons of mercury, while the United Nations reported that 286 metric tons was exported to Indonesia. The same disparity is evident for numerous other recent years.

To Ms. Yuyun, the conclusion was obvious: Hundreds of tons of mercury had been smuggled into Indonesia for illegal, small-scale miners in a modern gold rush that analysts and activists say is causing major environmental and health crises.

The quick and dirty production process emits mercury into the atmosphere. The metal has also seeped into soil, rivers, fish ponds and rice fields. Mercury is known to cause health problems, which may not appear for years, that include brain damage; kidney, skin and eye problems; miscarriages; and dysfunctional neurological development in infants and children.

Then there are the environmental impacts. According to the United Nations Environment Program, small-scale gold mining is responsible for 37 percent of global mercury emissions and is the largest source of air and water mercury pollution.

According to a study by the Blacksmith Institute, a nonprofit research organization in New York that focuses on pollution, one-tenth of global mercury emissions from such mining originate in Indonesia. Those emissions can spread from country to country and continent to continent.

Parts of Indonesia, including the resort island of Lombok, where illegal gold mining is rampant, have the highest mercury contamination readings on earth, according to studies by Blacksmith and other groups.

Industrial gold mining companies in Indonesia are forbidden to use mercury during processing, government officials said. They would not anyway, as they can afford safer, more effective alternatives. But the country does not ban mercury use outright in small-scale gold mining operations.

The Ministry of Environment is drafting a regulation that it hopes will go into effect in 2014, said Rasio Ridho Sani, the deputy minister of environment for hazardous substances, who is responsible for authorizing official import requests for mercury.

But Lana Saria, head of environmental protection in the minerals and coal directorate at Indonesia’s Ministry of Energy and Mineral Resources, said, “We can’t track illegally imported mercury because it can enter so many ports around the country.” She added: “We’re going to create a database because we don’t have real data on mercury imports. The data being publicized is from outside sources,” like the United Nations and environmental groups.

More than 15 million people, including approximately three million women and children, are involved in small-scale gold mining and production in 70 countries around the world, according to the United Nations Environment Program.

“Indonesia has the worst problem with illegal use of mercury in gold mining on earth,” Ms. Yuyun said. “Second is Colombia, then maybe Brazil. It’s a ticking time bomb.”

BaliFokus, an Indonesian environmental organization of which Ms. Yuyun is a co-founder, estimates that illegal gold mining and production areas across the sprawling Indonesian archipelago ballooned to as many as 850 in 2013 from 576 in 2006, while the number of miners rose to one million from 50,000 during the same period.

Indonesia is one of the world’s biggest gold-producing countries. The Grasberg gold mine in Indonesia’s easternmost province, Papua, is the largest anywhere. The country produced 60 metric tons of gold in 2012, said Ms. Saria of the energy ministry. She estimated, however, that 65 to 100 metric tons of gold were illegally produced in 2012 by small-scale gold miners who use mercury, costing Indonesia billions of dollars in royalties and taxes. Officials and environmental observers say it is nearly impossible to track the illegal gold; it can be easily traded or sold.

Many illegal mining operations are funded by businessmen based in the capital, Jakarta, and protected by corrupt local government officials, soldiers and police officers, according to environmental groups and researchers. In some areas, local environmental groups say, the Indonesian military and police are directly involved in gold mining.

In May, Indonesia’s Constitutional Court issued a landmark ruling giving indigenous ethnic groups the right to manage forests where they have traditionally lived. According to activists, the ruling will increase small-scale gold mining.

One of the plaintiffs in the lawsuit was Okri, who like many Indonesians uses only one name, the clan leader of Cisitu, a remote village in the mountains of West Java that dates back to 1625. Cisitu, along with several surrounding villages, is the traditional land of the Kasepuhan clan, and its elders have spent more than a decade fighting to stop illegal gold mining — they claim the miners are backed by corrupt local police officials — in Mount Halimun Salak National Park, which lies just to the north of Cisitu.

Most days, trucks hurtle down treacherous mountain roads to reach Cisitu, carrying sacks of gold ore weighing 50 kilograms that was mined from sites one to five hours away. There the ore is sold to local shops. The village has 1,621 households, and Yoyo Yohenda, Mr. Okri’s son and a village leader, estimated that one-third of them have backyard gold production workshops known as “ball mills.”

Uun Adang, 32, with her husband, runs a gold burning workshop, attached to her home in Cisitu. “My husband used to do mining and then we had a ball mill, but now we just purify gold and sell it,” she said, adding that they use nitric acid and other chemicals to burn off the mercury.

The economics of such small-scale operations can be a gamble; mill operators pay about 150,000 rupiah, or $12.45, for a sack of ore and sell the resulting gold amalgam to burning workshops for roughly half the current market price for pure gold.

Mrs. Uun, who is four and a half months pregnant, agreed to give a hair sample to BaliFokus researchers in November to test for mercury. The World Health Organization defines a normal level at one part per million, and the United States Food and Drug Administration defines it as two p.p.m. Mrs. Uun had a reading of 25.3 p.p.m.

Several male residents of Cisitu who also gave hair samples had readings of up to nine p.p.m.

Studies done in other regions of Indonesia, including work by the University of Mataram on Lombok Island, showed elevated mercury levels in people processing gold, and dysfunctional motor skills among local children.

“The youngest victims were children between 10 to 12 years old,” said Baiq Dewi Krisnayanti, a lecturer and researcher in soil science at the university. “The way they were affected by mercury was through mining it from tailing ponds in their area, and also inhaling it during the mercury burning process to get gold.”

“They are playing with dangerous chemicals like they’re water,” said Ms. Yuyun, the BaliFokus co-founder.

In 2009, Blacksmith carried out a toxic site evaluation program that included rivers in the Kalimantan region, which lies on the Indonesian side of Borneo. Water testing on three primary rivers found mercury levels 14.5 to 140 times as high as the E.P.A. safety standard.

Blacksmith is working with the Ministry of Environment on mitigating health and environmental problems caused by mercury use in gold production.

Budi Susilorini, the Indonesia country director for Blacksmith, said the Indonesian government was trying to cut the supply of mercury — quietly sold through distributors across the country — to small-scale gold mining operations. As a result, the price of a kilogram of mercury recently tripled to about $148, she said.

The Indonesian government hopes that with a new regulation on the books, mercury use in small-scale mining will be phased out by 2019. Until then, Ms. Budi said, “For some miners, mercury is still the quickest way” to process gold.