IPENers featured in Environmental Health Perspectives article: Lead-Based Decorative Paints: Where Are They Still Sold—and Why? 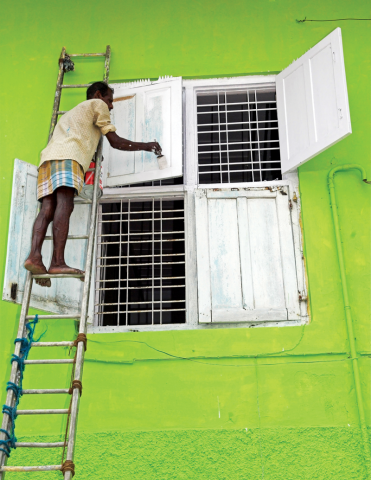 Rebecca Kessler is a science and environmental journalist based in Providence, RI.

In 2002 researchers at South Africa’s Medical Research Council collected blood from first-graders in impoverished townships of Johannesburg to check their exposure to lead, a powerful neurotoxicant. The children’s blood lead levels were high by today’s standards, averaging 9 µg/dL.1 But one student had 52 µg/dL of lead coursing through her veins, far above the 5-µg/dL concentration at which intervention is currently recommended in the United States.2 The researchers went to her apartment to investigate and met a skinny, withdrawn little girl and her parents.

“You’re here because of what she eats,” study leader Angela Mathee recalls the girl’s mother saying. Huge patches of pale lemon-yellow paint were missing from every wall in the apartment, where the girl had spent hours chipping it away and eating it. The windowpanes were loose because she had eaten the painted putty holding them in place, and the dirt outside was pitted where she had devoured it, too. Carmelita (a pseudonym) had severe pica, the compulsive consumption of nonfood substances. Her parents had taken her to various doctors, but they had offered little help. None had tested her blood, although lead poisoning often shadows pica like a phantom.

When Mathee met Carmelita, it had been decades since developed nations had banned lead-based paint, and South African paint companies had long before voluntarily agreed to abandon lead, too.3 But when Mathee tested paint from the apartment walls it was loaded with lead, even though Carmelita’s parents said they’d purchased it recently.1,3

While pica presents a dramatic example of exposure to lead, far more children can be dangerously exposed just by inadvertently consuming dust from deteriorating paint through normal activity.4,5 Often, lead exposure has no observable symptoms and goes unrecognized.6 But early exposure can cause profound neurobehavioral problems including decreased life-long intellectual performance and behavioral changes—even at blood concentrations below 5 µg/dL, which researchers once thought far too low to harm kids.5,7 Lead exposure has also been associated with Alzheimer’s disease and cardiovascular disease.8,9