Majority of Paints in Cameroon still Have High Levels of Lead 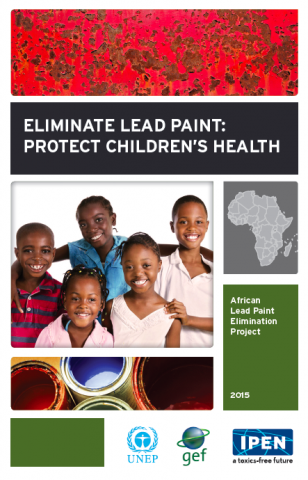 The majority of paints in Cameroon still have high levels of lead, as reported in CREPD’s press release below:

(Yaoundé, November 25). A new study on lead in decorative paints in Cameroon released today by the Research and Education Centre for Development (CREPD) finds that more than half of the decorative paints analyzed have high lead levels and that little has changed since a similar study with similar results was released last year. Moreover, even when there are paint brands offering paint with lower levels of lead, consumers are informed only by one local manufacturer among the 21 in the study.

“The health impacts of lead exposure on young children’s brains are lifelong, irreversible and untreatable,” said Dr. Gilbert KUEPOUO; Coordinator of CREPD. “We must reduce this critical source of lead exposure to young children. A national, mandatory lead standard and regulatory framework for the manufacture, import, export, sale and use of lead paints and products coated with paint is needed to ensure the health and future potential of our children.”

“Children are most likely to be exposed to lead from ingestion of flakes and dust from decaying lead-based paint, according to WHO, affecting children's brain development and their measurable level of intelligence (IQ)”, said Pr. Francisca Monebenimp, Paediatrician and Lecturer at the Faculty of Medicine and Biomedical Studies, University of Yaoundé I; who added that “Childhood lead exposure is estimated to contribute to 600, 000 new cases of children with intellectual disabilities every year according to WHO”.

In 2015, CREPD purchased a total of 54 cans of solvent-based, enamel deco­rative paints from stores in Yaoundé and Douala. The paints were from 21 brands, both locally manufactured and imported. All paints were analyzed by an accredited laboratory in the United States of America (USA) for their total lead content based on the dry weight of the paint. Key findings include:
·         54%, mostly of imported decorative paints analyzed contained deadly levels of lead which would not meet regulatory standard of 90 ppm established in many countries
·         Some major local manufacturers are producing paints with less than 90 ppm lead as compared to 2011 study
·         Bright colors (yellow, green, and red) had the highest lead content culminating at 85,000 ppm; 56,000 ppm; and 11,000 ppm respectively, far away from less than 90 ppm that is recommended.
·         Paint labels for only one company-CEP Seigneurie – included information about lead content and lead hazard.
·         False labels indicating wrong lead contents were recorded on two brands of imported paints and one brand of locally manufactured paint.
·         Double standard practices were noted on one paint brand manufactured in the EU where more stringent regulation on lead paint is applied.

CREPD began studying the lead content of paints and raising awareness of the hazards of lead paint in 2011 when its first paint analysis showed that the majority of paint analyzed, from all manufacturers, had high lead content. Most highly industrial countries adopted laws or regulations to control the lead content of decorative paints —the paints used on the interiors and exte­riors of homes, schools, and other child-occupied facilities—beginning in the 1970s and 1980s. Cameroon does not currently have a specific policy or regulation for the content of lead in enamel decorative paints.

Key recommendations made in the report include:
-         National regulation. Development and implementation of a National relevant regulatory instrument to control lead in paint marketed in Cameroon is require to ensure the total phase out of lead paint in Cameroon.
-         Public awareness. Given the serious impact childhood lead poisoning has on both an individ­ual and a nation’s future, a public information campaign in Tanzania should inform the public about the hazards of lead exposure, especially in children; the presence of paints with high lead content for sale and use on the national market; lead paint as a significant source of childhood lead exposure; and the availability of techni­cally superior and safer alternatives.
-         Voluntary action by paint manufacturers. Paint manufacturers should act voluntarily to eliminate lead compounds in the formulation of their paints – particularly, their dec­orative paints and paints for other applications likely to contribute to lead exposure in children and others before and after the national lead control legal instruments are in place. That some manufacturers are doing this now indicates that the technology exists in Tanzania to make the shift to lead safe products.

The paint study released today was conducted as a part the African Lead Paint Elimination Project, which works with government, the paint industry and the public to raise awareness of the dangers associated with high lead levels in paint. The African Lead Paint Elimination Project is being carried out in four countries (Cameroon, Cote d’Ivoire, Ethiopia and Tanzania) with funding from the Global Environment Facility. The United Nations Environment Programme (UNEP) is the Implementing Agency and IPEN is the Executing Agency for this project. IPEN is a network of 700 NGOs in more than 100 countries working for a toxics free future and is a member of the Advisory Committee for the Global Alliance to Eliminate Lead Paint, an activity of UNEP and WHO. The Cameroon NGO, CREPD, is responsible for Lead Paint Elimination Project activities in Cameroon. 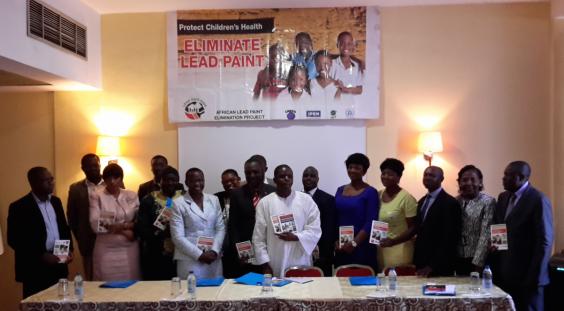