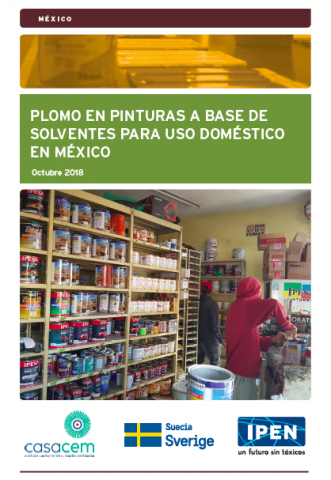 Guadalajara, México. A new study on lead in architectural decorative paints sold for home use in México released today by Casa Cem and IPEN finds that more than one-fourth of the paints analyzed contained dangerously high total lead content greater than 10,000 parts per million (ppm). The maximum permissible limit on lead in paint in e.g. USA and Canada is 90 ppm—the same threshold recommended by the UN Environment Programme. One yellow paint from the brand, General Paint, contained the highest amount of lead at 200,000 ppm. Moreover, a yellow paint from the brand, Pinturas y Matices, labeled as “lead-free” contained 130,000 ppm lead.

“Exposure to lead even at low levels has irreversible and lifelong impacts to children, especially those aged six years and below—the critical age for brain development,” said Sofia Chávez, General Director of Casa Cem. “We must eliminate this perilous source of lead exposure to young children to protect their intellectual growth and maximize our nation’s future intellectual capacity. This can be done now since safe and effective alternatives to lead are already in use and generally available in México.”

The economic cost in México due to the neurodevelopmental effect of children exposed to lead are equivalent to 1.86% of the country’s Gross Domestic Product (GDP).[1]

“Lead paint is a major source of childhood lead poisoning and there are no known safe levels of exposure,” said Dr. Sara Brosché, Global Lead Paint Elimination Campaign Manager, IPEN. “We see globally that countries have therefore increasingly started to adopt strong regulatory controls to ban use of lead in all types of paint to protect their children. We join Casa Cem in urging the government of México to adopt and enforce strong legally binding limits on lead in paint. In addition, it is important that paints are subjected to independent lead content certifications to ensure that paints labeled “lead free” or similar claims do not contain high levels of lead as seen in this study.”

From January to March 2018, Casa Cem purchased a total of 118 cans of solvent-based paint intended for home use representing 39 brands produced by 38 manufacturers from various stores in Guadalajara and Puebla, México. All brands were manufactured in México. Samples from these paints were analyzed by an accredited laboratory in the USA for total lead content.

Key findings from the report, Lead in Solvent-Based Paints for Home Use in México, include:

There is currently no regulation that prohibits the use of lead in paint in México. Existing Mexican standards do not set a specific maximum permissible limit for lead as a contaminant in paint, but a new standard that will establish a maximum total lead content of 90 ppm in decorative, architectural household paints is currently being drafted by the Federal Commission for the Protection Against Sanitary Risks (COFEPRIS), an office depending from the National Health Ministry.

Most highly industrial countries adopted laws or regulations to control the lead content of decorative paints—the paints used on the interiors and exteriors of homes, schools, and other child-occupied facilities—beginning in the 1970s and 1980s. In Asia and Africa, many countries have adopted new strong regulatory controls the past ten years.

The World Health Organization (WHO) recognizes lead paint as a major source of “lead-caused mental retardation,” a disease WHO identifies as one of the top ten diseases whose health burden among children was due to modifiable environmental factors. WHO further states that “there is no known level of lead exposure that is considered safe.”[2]

IPEN is a global non-government organization (NGO) with participating organizations in more than 100 countries working for a toxics free future. It has conducted studies of lead in paint in more than 50 countries and is a member of the Global Alliance to Eliminate Lead Paint Advisory Group. For information, visit www.ipen.org.

Casa Cem is a Mexican non-government organization (NGO) which general objective is to contribute to the improvement of the socio- environmental conditions in the western region of Mexico through governance, management, education, training, advocacy, communication, and research projects concerning the natural resources and their interaction with humans.  For more information, visit www.casacem.org.