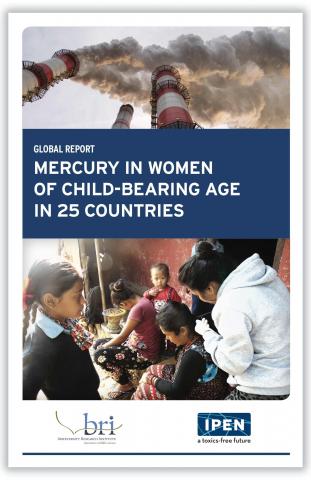 (Göteborg, Sweden) Mercury, a neurotoxic metal, has been found in high levels across all global regions in women of reproductive age, according to a new study conducted by IPEN (a global public health & environment network) and Biodiversity Research Institute (BRI). Women in the Pacific Islands and in communities near gold mining sites in Indonesia, Kenya, and Myanmar were found to have average mercury levels many times higher than US Environmental Protection Agency (EPA) health advisory levels.

The research, Mercury in Women of Childbearing Age in 25 Countries, was undertaken to measure the prevalence of mercury body burden at levels that can cause neurological and organ damage. Mercury in a mother’s body can be transferred to her fetus during pregnancy, exposing the developing fetus to the potent neurotoxin. The study is the first of its kind to sample as many countries and regions and spotlight women of childbearing age.

Researchers from IPEN coordinated hair sampling from 1044 women of reproductive age in 37 locations across 25 countries on 6 continents. Analysis, conducted by BRI, found that 42% of women sampled had average mercury levels over the US EPA health advisory level of 1ppm, above which brain damage, IQ loss, and kidney and cardiovascular damage may occur. The study additionally found that 55% of the global sample of women measured more than 0.58ppm of mercury, a level associated with the onset of fetal neurological damage.

The study found significantly elevated mercury concentrations in the hair of women in numerous regions of the world related to three predominant causes of mercury pollution: coal-fired power plants (one of the main sources globally that contaminate oceans with mercury that accumulates in fish), artisanal small-scale gold mining (ASGM) and local contaminated sites from various industries releasing mercury to soil, water and air.

“This study illustrates the unfolding global mercury pollution threat for the women and children of many Pacific Island nations and for most women engaged in small-scale gold mining,” said Lee Bell, the study’s Principle Investigator from IPEN. “The very high mercury levels found in the hair of most of these women point to the urgent need for action to phase-out coal-fired power plants and the international trade of mercury supplying small-scale gold mining, the two most significant causes of mercury pollution.”

Next week, governments from across the globe will convene in Geneva, Switzerland to discuss next steps for the new international, legally-binding treaty, the Minamata Convention on Mercury. The research underscores the need for guidance to identify mercury-contaminated sites, monitor mercury body burden, and take action to curtail the primary sources of mercury pollution—coal-fired power plants and ASGM.

Commented Yuyun Ismawati, IPEN Lead for ASGM/Mining and Goldman Prize winner, “Millions of women and children in communities mining gold with mercury are condemned to a future where mercury impairs the health of adults and damages the developing brains of their offspring. As long as the mercury trade continues, so too will the mercury tragedy.”

“This study underscores the importance of global cooperation to address mercury pollution,” said David Evers, PhD, Executive Director and Chief Scientist at BRI and co-author of the study. “Mercury contamination is ubiquitous in marine and freshwater systems around the world. Biological mercury hotspots are globally common and are related to a variety of human activities. For these reasons, it is critical that we continue biomonitoring efforts to track potential impacts on local communities and on the environment in order to evaluate the effectiveness of the Minamata Convention.”

Cook Islands resident Imogen Ingram of the Island Sustainability Alliance learned that her own mercury levels were two and half times that of the US EPA health advisory threshold. “It is really alarming to learn that you have high levels of toxic mercury in your body and that as a result, you have, without knowing, passed on mercury to your child,” she commented.  ”Mercury contamination across the Pacific Islands is high because we eat fish. But I do not want to be told not to eat fish. Coal-fired power, one of the primary sources of mercury pollution in the oceans, is the real offender. It is time to phase it out.”

Reporters and Editors please contact to arrange interviews with the study principle investigators.

IPEN is a network of non-governmental organizations working in more than 100 countries to reduce and eliminate the harm to human health and the environment from toxic chemicals. www.ipen.org

The mission of Biodiversity Research Institute is to assess emerging threats to wildlife and ecosystems through collaborative research and to use scientific findings to advance environmental awareness and inform decision makers. www.briloon.org