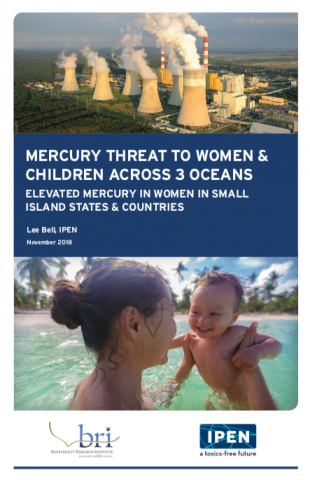 (Göteborg, Sweden) A new study has found elevated levels of toxic mercury in women of child-bearing age in countries across the Pacific, Caribbean, and Indian Ocean. More than half of all women who were sampled measured above the US EPA level of concern, and three out of four women measured had mercury levels that have been associated with the onset of mercury-related impacts to fetal development. The study establishes that mercury pollution has accumulated across the worlds’ major oceans, contaminating the marine food chain and posing a threat to a sizable portion of the world’s island populations.

The study, conducted by IPEN (the global network for a toxics-free future) and BRI (Biodiversity Research Institute), with sampling conducted by local partners, was undertaken to assess the reach of ocean mercury pollution and compare mercury exposure across regions for people living in island nations far from mercury pollution sources. Mercury in a mother’s body can be transferred to her baby during pregnancy, exposing the developing baby to the potent neurotoxin, potentially resulting in neurological and cognitive impairment, as well as kidney and cardiovascular damage. High levels of mercury exposure can lead to brain damage, intellectual disability, blindness, seizures and the inability to speak. The 21-island study is a follow-up to the IPEN/BRI 2017 study, Mercury in Women of Child-bearing Age in 25 Countries, which evaluated women’s mercury body burden from a variety of mercury pollution sources. The new 21 island study focuses on the mercury threat to island people across the world’s major oceans, most of which can be attributed to mercury emissions from coal-fired power and the burning of mercury in small-scale gold mining.

Researchers coordinated the sampling of 757 women of child-bearing age in 24 locations in 21 Small Island Developing States (SIDS) and SIDS-like locations in the Pacific Ocean, the Caribbean, and the Indian Ocean. The study included the US islands of Molokai (Hawaii) and Saint Lawrence (Alaska), which are not SIDS, but are similarly remote from industrial mercury sources, have low industrial development levels, and are populations that rely on local fisheries as a major source of dietary protein. The study is the first to assess mercury pollution in SIDS at this scale and contributes to knowledge of mercury exposure in the Caribbean and Indian Oceans.

“I was pregnant during the study, as were a number of other women in my community. It is devastating to learn that our traditional island diet can hurt our developing children, or that to reduce the risk of brain damage in our babies we have to forgo our traditional ways of eating and providing for our families. It is unfair that we are suffering here on our tiny little island because governments far away are not ending toxic coal energy, when we all could be using renewable resources,” said Mercy Ritte, a mother of three and the coordinator of the Molokai hair sampling. (Mercy Ritte tells her story in this video.)

“This study presents stark evidence that mercury pollution poses an immediate threat to a significant portion of the world’s population. Over 66 million people live on small islands, and they are facing a double-edged crisis from coal-based energy. Their homes are threatened with flooding as climate change causes sea levels to rise, while their food supply is increasingly contaminated with mercury from coal burning emissions. There must be no further delays. We need to end the coal economy now and transition to safe energy sources,” said Pam Miller, IPEN Co-Chair and Executive Director of Alaska Community Action on Toxics (ACAT), an organization that works with Arctic Indigenous communities and facilitated hair sampling on Saint Lawrence Island.

The study is released to coincide with the second Conference of the Parties of the legally binding Minamata Convention on Mercury (Geneva, Nov. 19-23). Researchers hope the dramatic study will inform decision makers to take bold action to curtail the primary sources of mercury pollution—coal-fired power plants and mercury gold mining.

Lee Bell, IPEN Mercury Advisor and lead author of the study, stressed that the dire findings underscore a need for urgent and significant action. “If the Minamata Convention and instruments such as the Paris Agreement can’t deliver immediate action to end the global trade in mercury and replace coal-fired power with renewable energy, then politicians should seize the moment and issue unilateral bans on mercury imports and exports and declare an end to coal-fired power. No amount of gold or coal is worth the poisoning of the ocean and the damage it will cause to women and their children.”

“This large-scale study is the first concrete indicator of mercury threats for many Small Island Developing States because for many locations, there simply has been no existing data. The research fills a critical gap and it demonstrates the need for global cooperation to address mercury pollution. It is important that we continue biomonitoring efforts to track potential impacts on local communities and on the environment in order to evaluate the effectiveness of the Minamata Convention,” said David Evers, PhD, Executive Director and Chief Scientist at BRI and co­‐author of the study.

“Fish in our diet transfers the mercury pollution to our bodies from the oceans surrounding Small Island Developing States. A major source is coal-fired power stations, which disproportionately affects SIDS populations, both through methylmercury pollution and climate change. We want to make fish safe to eat for all of us. Coal should be replaced by solar and other renewable energies,” said Imogen Ingram, a contributing author to the report and leader of the Island Sustainability Alliance C.I. Inc., based in the Cook Islands.

To read an Executive Summary of the report and see a useful infographic, please go to this page.

Editors and reporters, please contact LauraVyda@ipen.org to arrange interviews with the researchers and individuals who were involved in hair monitoring in specific regions.

IPEN is a network of more than 500 non-governmental organizations working in 115 countries to reduce and eliminate the harm to human health and the environment from toxic chemicals.

The mission of Biodiversity Research Institute is to assess emerging threats to wildlife and ecosystems through collaborative research and to use scientific findings to advance environmental awareness and inform decision makers.