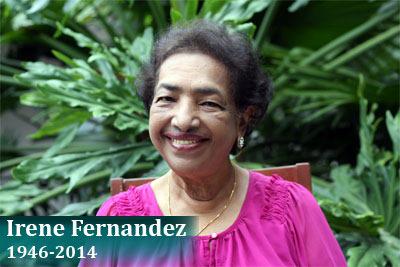 A life full of meaning, dedicated to the people’s struggle

PENANG, Malaysia – The Pesticide Action Network Asia and the Pacific (PAN AP) is deeply saddened with the passing away of beloved and respected activist Dr. Irene Fernandez today.

“We grieve with Irene’s family, friends and comrades in the people’s struggle. Without a doubt, she will be a big loss not only to the movement in Malaysia but to the global movement that is striving for a just and better world for the poor and oppressed,” said Ms. Sarojeni Rengam, Executive Director of the Penang-based regional advocacy group.

Fernandez had been hospitalized for a week after suffering a massive heart attack. Days before that, Fernandez was still able to attend the annual Steering Council meeting of PAN AP, where she served as Chairperson. Fernandez was instrumental in setting up PAN AP as an independent regional network. She would have turned 68 years old on 18 April.

“But while we are grieving and hurt, let us also celebrate the life of Irene. A life that had been without a doubt full of meaning, a life that had been selflessly dedicated to the people’s aspiration to end injustice and oppression,” Rengam said.

“PAN AP will be forever grateful to Irene for her untiring guidance. With the help of her leadership and invaluable advice, we have been able to faithfully fulfill our commitment to serve the interests of small food producers, defend their rights, and advance their welfare. Words could not describe how much PAN AP will miss her and her insights that had firmly stood for the small farmers, agricultural workers, migrants, women, indigenous peoples and other marginalized sectors,” Rengam added.

Fernandez was a well-known human rights advocate and Director and co-founder of the Kuala Lumpur-based non-government group Tenaganita, which promotes the rights of migrant workers and other oppressed and poor people in Malaysia.

Fernandez was a teacher turned social activist, a commitment she resolutely held for almost four decades.

Aside from serving as the Executive Director of Tenaganita and Chairperson of PAN AP’s Steering Council, Fernandez was also a member of the respective Steering Committees of the Asian Rural Women’s Coalition (ARWC), the Coalition of Agricultural Workers International (CAWI), Asian Peasant Coalition (APC), and the People’s Coalition on Food Sovereignty (PCFS). She was also the Director of CARAM-Asia and the Vice Chairperson of the International Migrant Alliance (IMA).

In addition, Fernandez was among the founders of the Asia Pacific Forum on Women, Law and Development (APWLD) and a former executive member of the Committee on Asian Women, aside from helping establish various women and human rights organizations in Malaysia.

Fernandez had received numerous awards from various prestigious institutions in recognition of her work to stop violence against women and the abuses against migrant and poor workers including the Human Rights Watch Award in 1996; the Amnesty International Award in 1998; the International PEN Award in 2000; the Jonathan Mann Award in 2004; and the Right to Livelihood Award in 2005. She was also a recipient of an Honorary Doctorate in Social Medicine from the Vrije University in Amsterdam.

Because of her work, Fernandez herself had been a victim of the Malaysian government’s persecution. She went through a 13-year trial for writing a report that exposed the horrific conditions in immigration detention centers in Malaysia. She was convicted to a one-year imprisonment in 2003 but was released on bail, and appealed the decision to the High Court that eventually dropped the charges against her in 2008. ###

Pesticide Action Network (PAN) is a global network working to eliminate the human and environmental harm caused by pesticides and to promote biodiversity based ecological agriculture. PAN Asia and the Pacific, one of PAN's regional centres, is effectively advancing food sovereignty, gender justice and environmental sustainability. We are committed to support the struggles of rural women, agricultural workers, peasants, indigenous peoples and other small food producers.