“We chose to launch this campaign on International Children’s Day to better highlight the particular vulnerabilities that our children face in terms of pesticides exposure. It is a fact that compared to adults, children suffer far greater risks of pesticide poisoning as well as physical and intellectual abnormalities due to harmful chemicals,” said PANAP executive director Sarojeni Rengam.

A US national survey found that of the 40 pesticides most commonly used in schools, 28 are probable or possible carcinogens (cancer-causing), 26 cause reproductive problems, 26 damage the nervous system and 13 are linked to birth defects.

“Pesticides grossly violate the rights of our children to a healthy and sustainable environment that will allow them to ‘survive and thrive’ and ‘learn and grow’, in the words of the UN. As adults and parents, we should make it our responsibility to ensure that the health and future of our children are not jeopardized by these harmful chemicals and pesticides,” Jayakumar, Director of Pesticide Action Network India said and co-chair of PANAP Task Force.

Through its online campaign, PANAP and its partners are encouraging Twitter and Facebook users to post photos of themselves and children holding a placard written with #PesticidesFreeWorld. 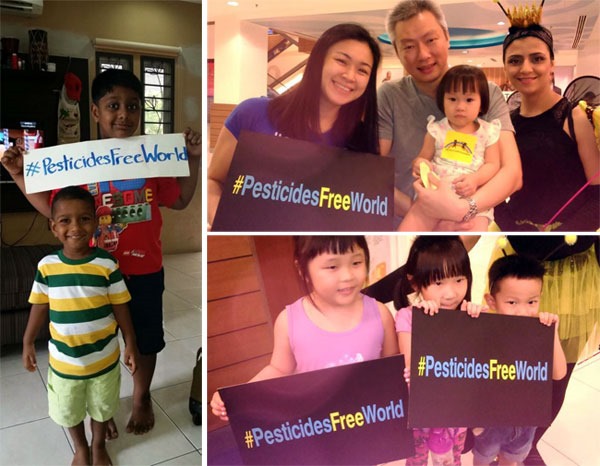 Social media users are also invited to use the campaign’s logo as their profile picture for the day.

“Netizens have proven that social media can be an effective tool in getting the attention of, and informing and educating the public, especially on issues that the mainstream media often ignore. Hopefully, our pesticides campaign will generate interest and gain traction in social media, and complement our other campaign efforts to initiate reforms that will protect our children from pesticides,” added Rengam.