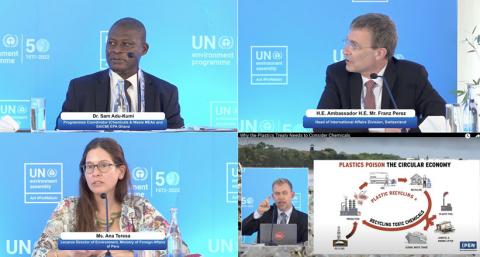 Nairobi, Kenya While some attempt to cast the global plastics crisis as a problem with disposal and litter, a distinguished panel at UNEA 5.2 confirmed that the future plastics treaty must address the problem of toxic chemical additives in plastics. The resolution to initiate the international process for a global, binding plastic treaty does not itself contain specific language about chemicals. However, two speakers underscored that the resolution's scope is broad enough to allow chemicals to be negotiated in the final treaty text. IPEN was lauded for its work to reveal the presence of such chemicals — recognized toxics such as BPA, PFAS, brominated flame retardants, dioxins, and other chemicals — in recycled pellets and products, as well its work to expose problems with bans on the export of plastic waste as fuel.

Ambassador Franz Perez, Head of International Affairs Division, Switzerland, emphasized that the resolution is only the start of the process, and that framing the issues as a north-south, developed versus developing country dichotomy would be counter productive, and even endanger a successful agreement. Yet, all too often, countries in Africa, Latin America, Southeast Asia, and the Pacific island nations have reaped the consequences of chemicals and pollution generated in more developed nations — the United States and the Europe Union, in particular. In a joint report with CIEL, IPEN noted that nearly all of the multi-trillion dollar petrochemical industry is located in fewer than 15 developed countries. Therefore, it is incumbent upon developed countries to support a binding resolution which address the upstream chemicals issues that will undermine any vision of a sustainable circular economy — one in which plastics continue to be widely used and recycled into new products.

Dr. Sam Adu-Kumi, Programmes Coordinator (Chemicals & Wastes MEAs and SAICM) EPA, Ghana, underscored the threat to Africa and others. "We desire that materials are designed to be toxic-free, in line with the idea and concept of green and sustainable chemistry," he said, noting that Ghana is ready and willing to work and join forces with other members states to protect the health of people, animals, and the environment from chemicals and waste, many of which are entering the region from abroad.

"IPEN was one of the critical actors to help us to engage in the right track,... an ambitious track, that is not looking away, but looking really at the problems," said Amb. Perez.

Ana Teresa Lecaros, Director of Environment, Ministry of Foreign Affairs of Peru, which was a co-author with Rwanda of the text that formed the basis of the new treaty resolution, noted that Latin America experiences many of the same issues that Dr. Abu-Kumi described in Africa. "We are not the producers of plastic," she said, "but this plastic and microplastic is ending [up] in our ocean, our soil, our rivers, and our air." She added that microplastics have been found in Andean condors 5000 meters above sea-level.

Ms. Lecaros went on to say that the resolution has the "notion of the full life cycle of plastics, meaning from the production and design" to their use. As several panelists noted, addressing single-use plastics is vital, but she added that we want "to have less plastics and of course to not have toxic waste outside in the environment.... As Peru, I can say that we firmly believe in the one health notion," and that the planet's health is one with the health of humankind.

View the press conference at UNEA5.2 in its entirely below: