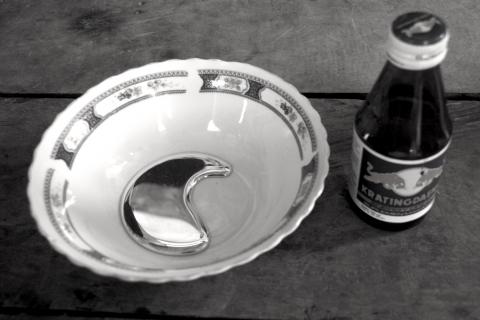 In a joint statement, the EcoWaste Coalition, the Collaboration Center for Minamata Disease Victims and IPEN (a global NGO network for a toxics-free future) called upon the participants of the “Regional Forum on Environment and Health in A Southeast and East Asian Countries” to endorse the rapid ratification of the mercury treaty and promote the early implementation of activities, with full participation of public interest groups, to prevent and reduce mercury pollution.

The Minamata Convention provides for controls and reductions across a range of products, processes and industries where mercury is used, released or emitted.

To date, only three countries from Southeast and East Asia have ratified the treaty.  These are China, Japan and Mongolia.  The treaty, which has been ratified by 32 countries, will enter into force 90 days after 50 states have ratified it.  The Philippines has signed the treaty in 2013 but has yet to ratify it.

“We urge the forum participants to declare full support for the accelerated ratification of the Minamata Convention for it to enter into force.   We need 18 more countries to put the treaty provisions into effect to protect human health and the ecosystems from mercury pollution that can endanger communities near and far from pollution sources,” said Aileen Lucero, National Coordinator, EcoWaste Coalition.

“Our call towards the expedited ratification of the mercury treaty will be in step with the goal of the forum, which is to create a platform for national and regional action to enhance and safeguard health and the environment and promote sustainable development,” she added.

Visiting advocate Yoichi Tani  from the Collaboration Center for Minamata Disease Victims expressed his hope that more countries from Asia will ratify the treaty named after Minamata, a city in Japan where severe health damage affecting thousands of people occurred due to years of mercury poisoning from industrial source.

“As we have painfully experienced in Minamata, mercury emissions and releases can gravely contaminate the ecosystems and seriously harm public health, especially the health of vulnerable groups such as women and children.  Action is needed on a global scale to prevent Minamata disease from destroying lives and causing terrible human sufferings.  This is why it is important for governments in the region to ratify the treaty,” he said.

“All the governments at this forum have agreed that mercury poses a global threat,” said Dr. Joe DiGangi, Senior Science and Technical Adviser of IPEN. “Now it’s time to act on this knowledge by ratifying and fully implementing the treaty.”

The groups further emphasized the importance for the international community to apply the lessons from the Minamata mercury poisoning tragedy.

As stated in the preamble of the Minamata Convention, parties “recogniz(e) the substantial lessons of Minamata Disease, in particularly the serious health and environmental effects resulting from the mercury pollution, and the need to ensure proper management of mercury and the prevention of such events in the future.”

According to the United Nations Environment Programme, “mercury and its various compounds have a range of serious health impacts, including brain and neurological damage, especially among the young.“

The Regional Forum provides a venue for sharing knowledge and experiences, improving policy and regulatory frameworks and promoting policy dialogue to implement integrated strategies on environment and health. The Fourth Ministerial Regional Forum will be hosted by the Philippines in October 2016.  The Forum’s Vision: Health and environment at the centre of development.  The  Forum’s Goal: Create a platform for national and regional action to enhance and safeguard health and the environment and promote sustainable development.
http://web.unep.org/regions/roap/events/reh-2016/regional-forum-effort-t...